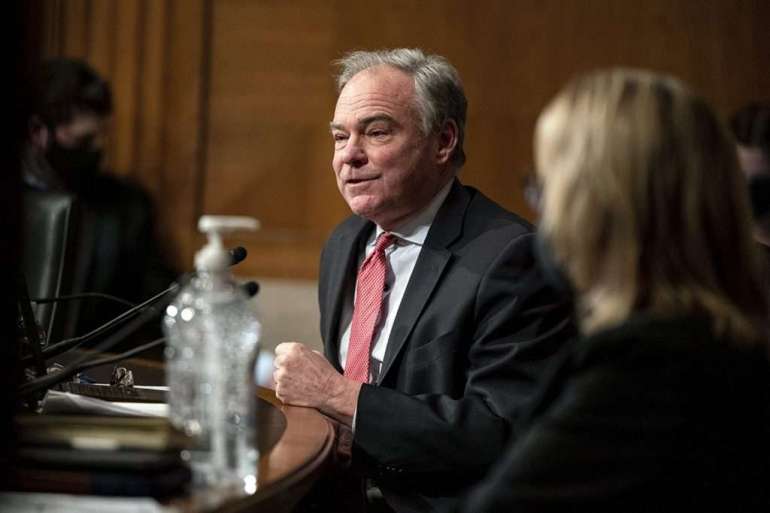 “The American people deserve to hear the Administration’s rationale for these strikes and its legal justification for acting without coming to Congress,” said Kaine, who sits on the Armed Services and Foreign Relations Committees.

“Offensive military action without congressional approval is not constitutional absent extraordinary circumstances,” he added. “Congress must be fully briefed on this matter expeditiously.”

Murphy, a Foreign Relations Committee member, added in a statement that “retaliatory strikes, not necessary to prevent an imminent threat, must fall within the definition of an existing congressional authorization of military force.”

Rep. Ro Khanna (D-Calif.), a progressive member of the House Armed Services Committee, slammed Biden following the attack. Khanna, who pushed legislation to curtail Trump’s ability to take military action against Iran, argued there was “absolutely no justification” for the Syria strike.

“We need to extricate from the Middle East, not escalate. The President should not be taking these actions without seeking explicit authorization instead of relying on broad, outdated [AUMFs],” Khanna said. “I spoke against endless war with Trump, and I will speak out against it when we have a Democratic President.”

The Pentagon briefed congressional leadership on Thursday night ahead of the attack, a spokesperson for the White House National Security Council said, and administration officials on Friday continued briefing lawmakers and congressional staff.

The administration will provide a full classified briefing to lawmakers early next week, though it could come “sooner if Congress wants it,” the spokesperson added.

“We had a rigorous process to include legal review of the strikes conducted,” the NSC spokesperson said. “The strikes were necessary to address the threat and proportionate to the prior attacks.”

Thursday’s airstrike in Syria came in response to three rocket attacks against U.S. personnel in Iraq in the span of a week. The new U.S. strike targeted facilities in eastern Syria used by Iranian-backed militia groups that were linked to the recent attacks on U.S. forces.

Though some lawmakers in both parties hailed Biden’s decision as a necessary move to deter threats by Iran and its proxy forces in the region, opponents of expansive presidential war powers questioned the legal justification for the attack and criticized the new president for conducting the airstrike without consulting Congress.

Kaine and Murphy have long pushed to repeal the 2001 Authorization for Use of Military Force and the 2002 Iraq War authorization and institute new guidelines for Congress to approve military action.

“Yesterday’s strikes were the correct, proportionate response to protect American lives, and I look forward to more information on the administration’s response to Iran’s aggression,” Inhofe said.

Rep. Mike Rogers of Alabama, the top Republican on the House Armed Services Committee, said Biden’s decision “showed that attacks on American personnel and interests will not be tolerated.”

“We must defend our interests abroad, and I hope the Biden Administration continues to apply pressure to deter future aggression from Iran and its proxies,” Rogers said.