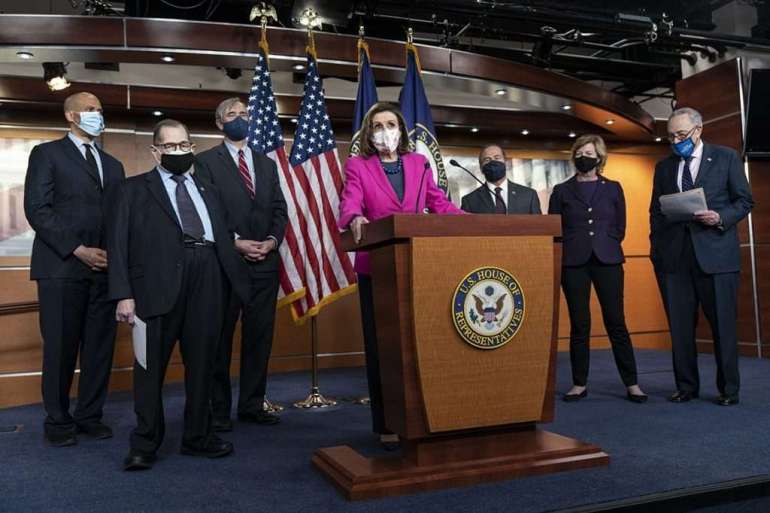 Rep. Anthony Brown (D-Md.) said Democratic leaders must work “gingerly” to keep their members together on the floor, particularly on what he termed “messaging” bills that have little chance in the 50-50 Senate and already generate internal divisions.

“It’s odd, you know, when you’re controlling both chambers and the White House and you’re still doing messaging bills. That’s going to kill us in the midterms,” Brown said. But he added, “the speaker’s a master at this.”

Democrats are moving legislation at a rapid clip for now, fast-tracking bills that were passed in the last Congress. They’re eager to show their base the type of progress that can come from electing Democrats to take full control of Washington. But taking big swings can mean taking big risks.

And unity tests are looming as many Democrats admit they’re still struggling to navigate a political landscape reshaped by the Jan. 6 insurrection. Their lingering distrust of GOP colleagues who opposed certification of President Joe Biden’s win spilled out onto the House floor after weeks of emotional conversations in private — threatening to hobble any chance of cross-aisle work in the House.

It all started as lawmakers from both parties packed the steps of the Capitol on Tuesday night for a candlelight vigil marking a half-million U.S. deaths from the coronavirus. Behind closed doors, Pelosi’s team was hustling to avoid an embarrassing defeat on the most mundane of congressional business: a bill to name a post office.

Rep. Sean Casten (D-Ill.) angered Democratic leaders by forcing a roll call vote on the bill, wanting to send a message that Democrats wouldn’t work with Republicans who have refused to denounce the pro-Trump rioters of Jan. 6. But top Democrats worried the move would have unforeseen ramifications, effectively torpedoing the House’s current practice of allowing quick consideration of noncontroversial, bipartisan bills by all members. The bill ultimately passed easily.

“There need to be serious consequences for trying to overturn the results of our election. I think there’s just a spectrum in the caucus right now on what that looks like,” said Rep. Alexandria Ocasio-Cortez, who was one of 15 Democrats who sided with Casten on the post office vote.

Now Pelosi and her leadership team must turn their attention to the intra-party fissures ahead as they take up several high-profile bills. Some will be easier than others, such as a long-delayed reauthorization of the Violence Against Women Act. Other bills on the docket involve tricky politics, whether the immigration status of farm workers or public funding of elections.

In only the second month of Democrats’ unified power over government, the limits of control are becoming clear. For many Democrats, passing legislation during the last Congress that was likely to run aground in a GOP Senate was one thing. Now that bills the House passes stand a real chance of becoming law, Democrats are suddenly looking harder at their own decisions.

“I know we’re going to have a lot of political to-and-froing, but I think this is going to be a very productive Congress,” House Majority Leader Steny Hoyer said.

That dynamic is complicating next week’s passage of a sweeping voting rights and government reform bill, one of the Democrats’ highest priorities from last Congress.

Senior Democrats are confident they will pass the bill, which carries the high-priority ranking of H.R. 1. But an influential group of Congressional Black Caucus leaders, several of them from the south, are raising objections to a provision that would require states to cede control of their redistricting decisions to independent commissions. The CBC members fear such a massive overhaul could be weaponized by GOP-controlled legislatures to undermine Black voters, but the bill’s supporters say there are protections already in place under law.

Rep. Hank Johnson (D-Ga.), who will likely oppose H.R. 1 without a change to the redistricting language, said he had the same qualms when the bill passed in 2019. But it’s simply tougher to support the expansive bill now, he explained, since the provision he objects to could actually become law this Congress.

“Last year, H.R. 1 was more aspirational,” Johnson said in an interview. “You have to be more careful about what you let go to the Senate.”

CBC Chair Rep. Joyce Beatty (D-Ohio) said those discussions are helping to whittle down the number of her members who oppose the bill — which she called a “good sign,” though she declined to say whether she was prepared to support the legislation.

“I think there’s a lot of great stuff in the bill, but obviously I want to make sure we don’t dilute minority representation,” Beatty said, noting there is still some talk of amending the language.

That bill is expected to reach the floor next week, along with another broadly popular bill from last Congress that’s run into new headwinds this year.

On the Democrats’ sweeping policing reform bill, a group of moderates are attempting to roll back language that seeks to hold police officers legally accountable for alleged misconduct, changing a doctrine known as qualified immunity. The centrists pushing back on that issue all backed the policing bill last summer.

They argue that keeping the qualified immunity provision as written would tank negotiations with the roughly 10 Republicans who would need to support the bill in the Senate. Most Democrats, though, argue the language is a crucial piece to holding officers responsible for any crimes committed on the job.

For the next two years, a group of just five House Democrats have the power to tank any bill they don’t like by voting no on the floor. So far, none have shown the willingness to blow it up. Privately, some members believe such a stunning moment could happen soon but acknowledge they face intense pressure to stay together.

Meanwhile, the bad feelings in the wake of Jan. 6 remain unresolved for many Democrats.

There’s lingering anger within the caucus about what several Democrats privately described as their leadership’s failure to start a “family conversation” until this week about interacting with Republicans in a post-Jan. 6 world. Senior Democrats counter that there’s no way they could institute any kind of caucus-wide policy on the issue and say they have addressed it in numerous conversations before this week.

Casten defended himself on a private caucus call mid-week, saying he didn’t want to be ostracized as the “Thomas Massie of the left,” according to several people listening — referring to a Kentucky House Republican who has alienated many in his conference. But Casten is one of several Democrats who have drafted their own kind of “blacklist,” refusing to work with any GOP members who supported Trump’s efforts to overturn the election.

House Financial Services Chair Maxine Waters (D-Calif.) said on the call that she didn’t plan to bring up bills in her committee that were cosponsored by those Republicans, according to two Democrats.

On the call, Pelosi and other Democratic leaders advised each member to do what’s right for their districts while underscoring that they wouldn’t allow the full institutional breakdown that would result if Democrats stopped working with Republicans outright.

“In the context of interacting with those who continue to provide aid and comfort to a violent insurrection,” House Democratic Caucus Chair Hakeem Jeffries (D-N.Y.) said, “everyone’s going to have to make individual decisions.”