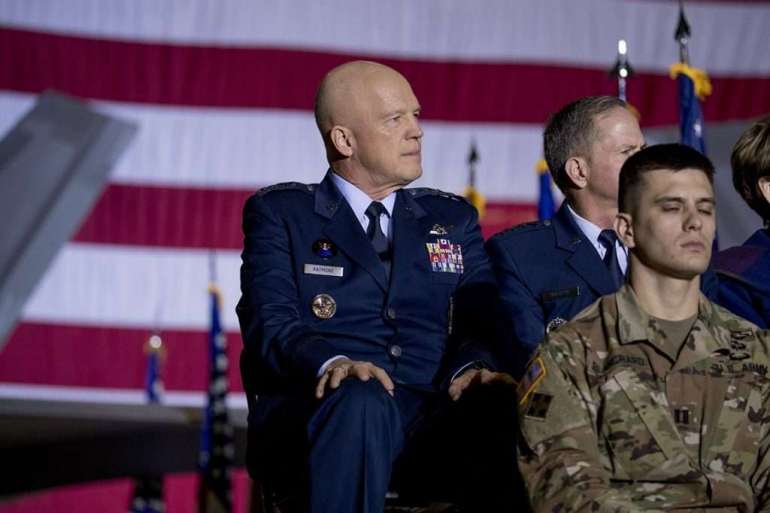 “I would expect we’ll have a new service prototype here in the next couple of months that we’ll begin wear-testing,” said Raymond, who has led both U.S. Space Command and Air Force Space Command. “We also have developed a design for the [physical training] uniform. That will roll out here over the next couple of months as well. So we’re making some progress. That’s another one of those things you want to get right.”

Raymond declined to give any details about what the uniform will look like, saying only that it’s “still in the works.” But it’s almost certain to be more traditional than the metallic fabrics, space helmets and colorful camo inspired by science fiction that have been floated on social media.

The Space Force, which was established in December 2019, has ticked off several items from its to-do list in its first year. That includes a flag, a logo, a motto, a rank structure and a name for members of the branch. Unique uniforms, plus an official song, are some of the only cultural items left on the list.

Raymond, who is the first chief of space operations, also talked about why members of the Space Force are called guardians and why Congress’ demand to improve the acquisition pipeline for space is reasonable.

“Congress has been very clear on what they expect,” Raymond said. “I could not be more proud of the progress that we have made, but I would expect Congress to be demanding customers.”

This transcript has been edited for length and clarity.

Why did you pick the name guardians?

We opened it up across the country. We crowd-sourced it, if you will. We had organizations that deal with language come up with words. We really came at this [as] hard to come up with an appropriate name. This is an important decision. It’s not a decision that you can throw out there and then say, “Oops, we want to bring that back.” So we were deliberate. We went through that whole process. We got all those names. We focus-group tested those both internal to the Space Force and external to the Space Force.

What we really liked about guardians is that there was a tie to our past. In 1983, there was a contest that was done to [pick] the official motto of Air Force Space Command. The motto that was chosen was “guardians of the high frontier.” We just thought that guardians was something that was tied to our history that also best captured what we viewed as the critical mission of the space forces and that’s to guard and protect the critical capabilities that fuel American way of life. We thought it was a good pick.

When did former President Donald Trump first talk to you about the establishment of the Space Force?

This has been an evolution for me since I took command of Air Force Space Command back in 2016. I came off the stage and they asked me if I would do a media availability with the local Colorado Springs media. And one of the questions that I got was, do you think space should be in the Air Force? From the day of my change of command on, there has been this national dialogue about the right organization for space. This is a dialogue that’s been going on for 30 years.

More broadly inside the Department of Defense, the first thing that I was part of was the reestablishment of U.S. Space Command. In August of 2018, I was told to begin planning. I brought a team together and we planned for that standup and we stood it up a year later in August 2019.

Then it was decided that we were going to stand up a Space Force. It was interesting. The Air Force had done a lot of planning for about eight months or so before that, planning for what a Space Force might look like. The initial plan said once the law was signed, we were going to study this for about 18 months and then establish it. If that was the case, I would be sitting here today telling you in about three or four months from now, we’re going to stand this thing up.

Have you spoken with President Joe Biden about his vision for the Space Force?

I have had an opportunity to talk with President Biden. The president and the vice president came over to the Pentagon and met with the Joint Chiefs, so I was there and I had an opportunity to talk about the strategic environment that we face. I was very pleased to hear that the administration came out in full support of the Space Force. It was really clear that everybody understands the importance of space to our nation and just how critical the standup of the Space Force is to stay ahead of a growing threat.

Have you gotten any feedback from the administration on your fiscal 2022 budget request?

I haven’t had those conversations, so I wouldn’t speculate on it. I can tell you what we focused on in broad themes. This budget is the first Space Force budget as an independent force. So we focused on being able to carry out the requirements of the National Defense Strategy, protecting and defending the critical capabilities that we have in space, shifting to a more defendable architecture and partnering with allied partners and international commercial partners.

Why did you decide to make Space Force ranks closely aligned with the Air Force, even though some on Capitol Hill were pushing for the service to use Navy ranks?

We modified the ranks for the Space Force. The ranks mean something to those in the service. I really wanted to have an opportunity to have the members of the Space Force have a say in it. The Navy ranks were designed for the maritime domain. We wanted to design something that meant something for space.

The Air Force ranks had the term airmen and the first four ranks. so we wanted to change those ranks because we’re not airmen anymore. We focus group tested this as well and we came up with the ranks specialists 1, 2, 3 and 4. We have space operators. We have acquisition experts. We have engineer experts. We’ve got cyber experts. We’ve got some software coders. That specialist term fit all those career fields. We didn’t want to be gender-specific with men, so it’s a gender-neutral rank.

We wanted the term staff sergeant [and] we took the staff off of that and made it sergeant, which was more in line with what the Army does and the Marines do. And then beyond that sergeant and above on the officer’s side, we felt that it didn’t require changes to meet what it is that the Space Force is going to do. And so that’s the way we tackled it and we approached it and we think we landed in a good spot.

Do you think ‘Star Trek’ fans are disappointed there are no admirals in the Space Force?

How will you address concerns on Capitol Hill about speeding up acquisition of space assets?

This first year of the Space Force was all about establishing or inventing and building this service, and year two is about integrating the Space Force. There was a language in the law that says we were to develop an alternate acquisition proposal, which we’ve done. We’re continuing [to] coordinate that throughout the government, and we’ll deliver that to Congress when we get through that coordination.

The other thing that we’ve done is we are in the process of establishing what we call Space Systems Command. Over the last few years, we reengineered the Space and Missile Systems Center to take a more enterprise approach. We’ve now completed the development plan on what the Space Systems Command is going to look like. We’ll probably come out publicly and talk about this in the next couple weeks.

Do you think Congress is asking for too much too soon since the Space Force is only 15 months old?

Not at all. Congress has been very clear on what they expect. We come to work every day sprinting. Everyone in this force is running really fast. There is a national imperative to stay ahead of a growing threat. I could not be more proud of the progress that we have made, but I would expect Congress to be demanding customers. We understand the need to go fast. That’s why we were stood up. That’s why we designed this force the way we designed it. And we have our foot on the accelerator.

When can we expect to see new Space Force dress uniforms?

We have a team working on a new service dress, which is the coat and tie. I saw one prototype. We went back to the drawing board on a few items on that, and we’re hosting our first uniform board in March. I would expect we’ll have a new service prototype here in the next couple of months that we’ll begin wear testing.

We also have developed a design for the PT uniform. That will roll out here over the next couple of months as well. So we’re making some progress. That’s another one of those things you want to get right.

Can you give any details of what the dress uniform looks like?

It’s still in the works.