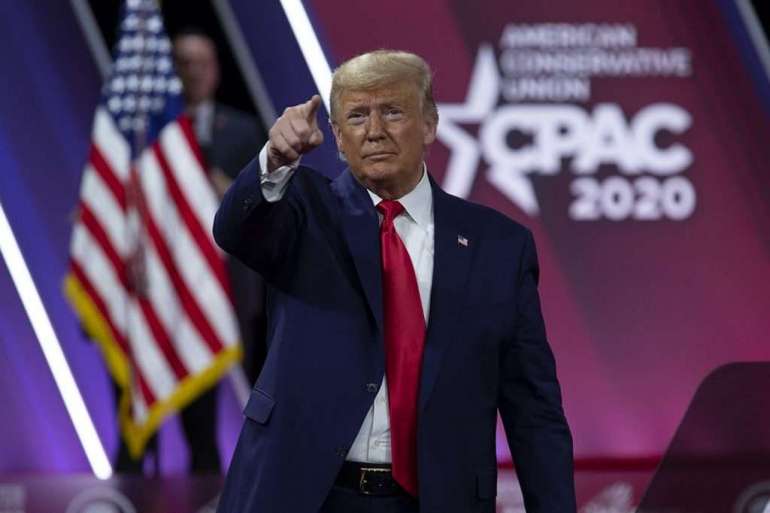 The episode perfectly captured the civil war raging inside the not-so-post-Trump GOP. And those divisions will be on full display this weekend during CPAC, an annual party gathering where the action of late has become very much about one man — Donald John Trump — and very little about conservatism or policy or much of anything else.

McCarthy and House Minority Whip Steve Scalise (R-La.), who have separately trekked to Mar-a-Lago to schmooze with Trump, are both slated to speak at the conference. So is Trump, in what will be his first public political speech since leaving office.

Not speaking: Cheney, who unapologetically voted to impeach Trump for his role in the Jan. 6 riots, and Senate Minority Leader Mitch McConnell, who didn’t vote to convict Trump but condemned him nonetheless and has cut off communication with the ex-president. Cheney did, however, speak at a Reagan Institute event this week, where she urged Republicans to “make clear we aren’t the party of white supremacy” and called for any commission on Jan. 6 to look into Trump’s lies about the election.

Even before CPAC gets underway, the event is already showing how the top Republican leaders in Congress are making very different bets about the future of the GOP — and how it could be years before anyone finds out who is right.

In one camp, there are the Republicans like McCarthy and Scalise who have calculated that getting cozier with Trump and his base is the best way to boost the party’s prospects in the next election. In the other are establishment-minded pols like McConnell and Cheney, who counsel a more traditional brand of conservatism after the GOP lost both chambers of Congress and ultimately the White House under Trump.

Yet even McConnell — despite his reservations — told Fox News on Thursday that if Trump were the GOP presidential nominee in 2024, he would support him.

Rep. Chris Stewart (R-Utah) acknowledged that questions about the GOP’s identity are “clearly not settled yet.” But, he added: “the narrative that Republicans are fractured is greatly exaggerated.”

“Time is going to heal that,” he said, because “we’re united in the minority.”

For now, though, tensions are undoubtedly simmering as the party argues over its future. That includes a confrontation earlier this week involving freshman Rep. María Elvira Salazar (R-Fla.), who pushed back against former Trump aide Stephen Miller over his immigration views at a Republican Study Committee meeting. She made the case that the party needs to chart a different path in attracting Hispanic and Latino voters, while Miller has advocated for a hardline approach to curbing both illegal immigration as well as legal.

Not to mention, Rep. Marjorie Taylor Greene (R-Ga.) has kept up her controversial antics, earning some rebukes from her colleagues this week for posting an anti-transgender sign outside her office amid a heated debate about a LGBTQ rights bill.

“This is sad and I’m sorry this happened. Rep. Newman’s daughter is transgender,” tweeted Rep. Adam Kinzinger (R-Ill.), who noted that “this garbage must end” in order to restore the GOP. Greene’s decision to antagonize Newman “represents the hate and fame driven politics of self-promotion at all evil costs,” he wrote.

All of this is unfolding as Republicans were looking to move past the Cheney and Greene drama that consumed the party this month, when the GOP was forced to decide the fates of both GOP women. McCarthy maneuvered the party to stand by both: Cheney would keep her leadership post following an effort by conservatives to oust her, and Republicans wouldn’t kick Greene off her committees — though Democrats ultimately voted to do so.

But conservatives are now reviving their attacks on Cheney after this week’s press conference. The comments about Trump, while hardly new for Cheney, show how the party’s fissures can rip apart at any moment.

Rep. Andy Biggs (R-Ariz.), chair of the ultra-conservative House Freedom Caucus, says he still wants Cheney to resign from leadership after he was asked about her latest remarks.

“I don’t think it was appropriate at all,” Biggs told POLITICO. “It is consistent with the pattern she’s shown the last four weeks where she is basically dissing the vast majority of Republicans … I think she’s not reading and understanding where the Republican Party is at right now.” Biggs warned that if Cheney continues to criticize Trump publicly, the party could “go through the whole same rigmarole again” in challenging her role in leadership.

Rep. Jim Jordan (R-Ohio), another close Trump ally, also tweeted after the Cheney-McCarthy presser: “President Trump is the leader of the Republican Party.”

Primary contests could be the next battlefield between the GOP’s warring factions. Last month, Florida Rep. Matt Gaetz, who has positioned himself as Trump’s enforcer within the party, flew all the way to Wyoming to campaign against Cheney. Patching in Donald Trump Jr. through a speaker phone, he criticized Cheney’s leadership, called for a “change at the top” and even mocked her father’s shooting skills.

Then in early February, after McCarthy defended his deputy in a closed-door conference meeting, Gaetz sought to shift the responsibility for Cheney’s apostasy to the GOP leader.

“Kevin put it all on the line for Liz. Every House Republican knows it,” he tweeted on Feb. 7.

While Cheney’s fiercest critics haven’t changed their minds, neither have her defenders.

“I have a tremendous amount of respect for Congresswoman Cheney,” said Rep. Peter Meijer (R-Mich.), the only GOP freshman who voted to impeach Trump. When asked about the revived Cheney criticism, Meijer replied: “Our conference already held a meeting and discussed this very subject. Asked and answered.”

Pro-Trump primary challenges, especially in critical swing districts, could imperil the House GOP’s efforts to win back the majority. And the targeting of Cheney in particular could put McCarthy in a bind — forcing him to choose between a member of his own leadership team, whom he vouched for, and the Trump wing of the party, whom he can’t afford to alienate.

McCarthy dodged repeated questions from POLITICO on Thursday about Cheney, while allies insisted they have a good working relationship. But he did touch on the topic during an interview on Fox News, saying “the idea a Republican would join cancel culture is wrong” when asked about her latest comments on Trump.

“I’ve got to bring people together,” McCarthy later added. “Yes, we’ve gone through a rocky time, but we’ve done that before.”

And McCarthy declined to say Friday whether he would defend Cheney from any primary challenges, saying that “Liz hasn’t asked me.” He also told reporters he’s received no commitment from Trump to not target GOP incumbents.

But at least one leader has vowed to jump to Cheney’s defense: McConnell indicated during a POLITICO interview this month that he might get involved in her reelection campaign.

Rep. Dan Crenshaw (R-Texas), however, argued that the split in the party between the anti- and pro-Trump forces shouldn’t be so cut and dry: “Why do I have to choose?”

He also said it’s OK for Cheney and McCarthy to have different views on Trump. And to anyone in the conference who has a problem with that?