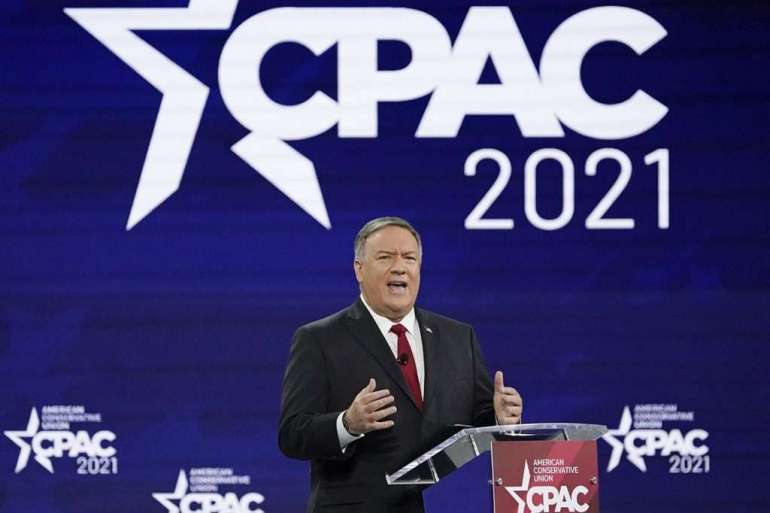 In a speech promoted as focusing on the Bill of Rights, Pompeo heavily laid into Democrats, arguing they “pretend they care about jobs in America” and ripped the Biden administration for cutting a key permit for the proposed Keystone XL pipeline. He slammed his predecessor as secretary of state, John Kerry, now Biden’s climate envoy, for suggesting in a January press briefing that fossil fuel workers who lost their jobs can “make … solar panels.”

“You ask the good people in the middle of Texas, Oklahoma, or Kansas, or South Dakota, or Pennsylvania, you think petroleum engineers and rig hands are going to make solar panels?” he added.

“’America First’ is right for America,” Pompeo said. “The entire world benefits when America is fearless and bold and strong.”

“[Democrats] want to defund the police while they barricade the Capitol,” Pompeo said. “This is backwards. And canceling our freedom to assemble peacefully while censoring our communications online is completely antithetical to what our founders understood about America.“

The former Kansas lawmaker is among a group of potential populist candidates jostling amid the Republican Party’s reckoning in the post-Trump era — even as the former president remains broadly popular among GOP voters.

Some of those in that lane include Sens. Ted Cruz (R-Texas), Josh Hawley (R-Mo.), Rick Scott (R-Fla.) and Gov. Ron DeSantis of Florida, all of whom have already spoken at CPAC. Trump is set to speak at CPAC on Sunday.

More than half of Republicans said in a recent POLITICO/Morning Consult Poll that they’d vote for the former president if the primary was being held today, with all other contenders well behind. Mike Pence led the secondary group at 12%. Pompeo drew 2%.