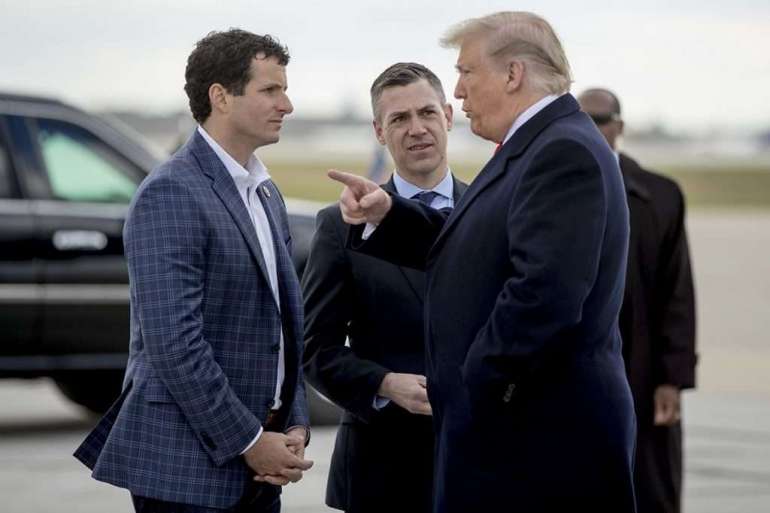 “Even though his style is somewhat understated or subdued,” explains Rep. Jodey Arrington (R-Texas), a close friend of Banks and an RSC member. “Jim knows what needs to be done, which problems need fixing and how to fix them.”

Take China. Banks, an Afghanistan veteran, saw how Trump’s anti-China rhetoric appealed to working-class voters and decided to make confronting Beijing a serious part of the group’s legislative agenda after years of focusing almost exclusively on budget and spending reforms. He and his allies recently introduced more than 20 bills narrowly tailored to the China threat — ranging from a push to end U.S. investments in the country’s military industrial base to requiring consumer protection warnings on apps and downloadable software with origins in China.

“These aren’t traditional issues that the RSC is focused on, but Trump taught us that these are issues we have to focus on in order to bring voters over and win elections,” Banks said in an interview.

The RSC had long been the dominant conservative faction in the House, but it was somewhat eclipsed by the House Freedom Caucus, which was founded in 2015 by GOP lawmakers who viewed the RSC as too meek. These hard-liners, including Rep. Jim Jordan (R-Ohio) and future White House chiefs of staff Mick Mulvaney and Mark Meadows, ultimately became some of Trump’s most loyal allies and won real influence during his term.

Now, as the GOP debates its relationship with the volatile one-term president, Banks is looking to boost the RSC’s profile by embracing Trump while trying to smooth off his sharpest edges. It’s an approach that could end up satisfying no one in such a polarized moment. But if he succeeds, the group could offer an operating manual of sorts for how the rest of the conservative machine should run between now and 2024 while giving him a prominent platform to rise in the House.

The first chapter of such a manual would probably consist of just five letters: F-I-G-H-T.

Over the course of an hour-long interview, Banks invoked the word more than a dozen times, reflecting just how deeply Trump’s pugilistic style has seeped into nearly every corner of the conservative movement — including the once-sleepy RSC. Only 48 members of the 148-member caucus voted to certify the 2020 election results following the deadly Jan. 6 riot of Trump supporters, while the remaining 100 followed Trump’s lead to overturn the outcome.

Trump’s bellicosity won him a cult-like following on the right, while his vulgarity was often excused by religious conservatives willing to avert their eyes as long as he backed their policy preferences on Israel, abortion and religious freedom. Even after the pro-Trump mob ransacked the Capitol, the self-avowed constitutional conservatives that Banks and his flock represent remain just as enthralled with Trumpism as they were at the height of his presidency.

“What the president taught us,” Banks said, “is how to fight back. The Republican Party base was looking for a fighter and they got that in Donald Trump.”

“Will the GOP reflect that moving forward? I think that’s a big question,” he added. “What you’ve seen with RSC is we’re a quiet group and we’re not going to be quiet any longer.”

The result, in the emerging version of the RSC under Banks’ leadership, is a group that intends to remain true to its ideological roots but with an ever so Trumpian flare. They will keep one eye trained on social and fiscal policies that have long been hallmarks of the conservative movement — akin to those Pence fought for during his 2005-2007 tenure as RSC chair — and the other on a new set of cultural topics that Republicans have only just begun to tackle under Trump.

Adding new legs to the stool

In some ways, the Banks experiment — call it the kinder, gentler form of Trumpism — has already begun.

There’s the RSC-led effort to protect the Hyde Amendment’s long-standing ban on federal funding for abortion procedures as well as Banks’ “Save Democracy” project, an ode-to-Trump plan to impose tighter voting rules that Banks circulated to his conservative colleagues just two days after the Capitol riot. There’s the drafting of the RSC’s signature budget — a fiscally conservative blueprint released annually by the group since 1995 — alongside its campaign to confront the alleged disproportional censorship of right-wing voices by Big Tech.

“The RSC has always been a conservative rudder of the House, but Jim also wants to get more involved in pushing out conservative policy alternatives,” House Minority Whip Steve Scalise (R-La.), himself a former RSC chair, said in an interview.

But beyond the new policy pillars the caucus is adopting, there is an almost excessive emphasis on ensuring the promises surrounding these issues are fulfilled.

This last part is shaping up to be the biggest challenge for conservatives as they navigate the post-Trump political landscape without their No. 1 champion nearby. Trump has emerged only a handful of times since relocating to Florida, though he made an appearance on Sunday at the annual Conservative Political Action Conference to encourage party leaders to continue fighting for his agenda.

Meanwhile, after only a month as RSC chair, Banks is already seen as a rising star in the House GOP. He spoke alongside House Minority Leader Kevin McCarthy at a CPAC panel titled “Winning Back America,” and has declined to rule out a run for House GOP conference chair. That’s the position currently held by Rep. Liz Cheney (R-Wyo.), perhaps the biggest Republican Trump critic in Washington.

Banks has also shown a media savvy lacking in many of his predecessors — inviting some of the brashest voices on the right to meet with members of his caucus, and generating headlines accordingly. Ahead of President Joe Biden’s inauguration, he hosted then-Secretary of State Mike Pompeo, a rumored 2024 hopeful, to discuss the future of the conservative movement at an off-campus gathering with GOP lawmakers that also featured remarks from Fox News’ Tucker Carlson.

Banks organized a similar meeting on Wednesday with Stephen Miller, who spoke to roughly 75 Republicans about immigration. But that gathering also revealed the RSC’s unique role as a sometimes uneasy coalition of many different GOP factions: Freshman Rep. María Elvira Salazar (R-Fla.) tangled with the former Trump aide over his restrictionist agenda, and some lawmakers even told POLITICO they skipped the event because Miller was the guest.

Banks has also organized caucus-wide meetings with figures who represent a more subdued version of Trumpism. A day before Miller’s appearance, RSC members heard from Pence, whose standing within the conservative movement long predates his association with his former West Wing boss.

Pence, who led the group partway through George W. Bush’s second term, encouraged his audience to remain united against the Biden agenda — including the $1.9 trillion coronavirus relief bill currently making its way through Congress — and said he has plans to start his own policy group in the coming months. Earlier this year, the RSC also heard from former South Carolina Gov. Nikki Haley, another top Republican with her eye on 2024.

“The first time I ever heard of RSC was when Mike Pence was chairman,” Banks said. “He was the emerging conservative champion and figurehead that I aspire to be at this moment.”

In fact, Banks is on the record as an early endorser of a Pence 2024 bid, something the former vice president has begun laying the groundwork for should he choose to run. “For me, Mike Pence is at the top of the list,” he said, while conceding that Trump would most likely win the party’s nomination if he decided to mount his own comeback bid in four years.

It’s that recognition of Trump’s abiding influence on the party, which has long rankled some conservatives, that will serve as Banks’ north star as he spends the next year working to position the GOP for a 2022 takeover of the House.

Though he’s not necessarily a MAGA fanatic — he admits to having taken a while to warm to the former president’s style and told the Washington Examiner shortly after the November election that “the Trump agenda was what was popular, not the man” — he believes there is no appetite for a Republican Party that pretends the last four years didn’t happen or reverts to its pre-Trump form.

While Banks said Trump’s coarse personality doesn’t need to dictate the way conservatives behave in future policy-making ventures, he firmly believes the former president’s agenda must continue to be integrated if the party hopes to survive. There is plenty of room for Trumpism — from maintaining an intense focus on China to bending conservative orthodoxy on trade and spending to not being afraid to dive deep into emerging culture wars — that can and should outlast the man himself, Banks contends.

“What I want to do with the RSC for the next couple of years is really make the Trump legacy and the Trump platform the platform of the Republican Party and the conservative movement of the future,” he said. “And RSC is perfectly positioned to effectively do that.”