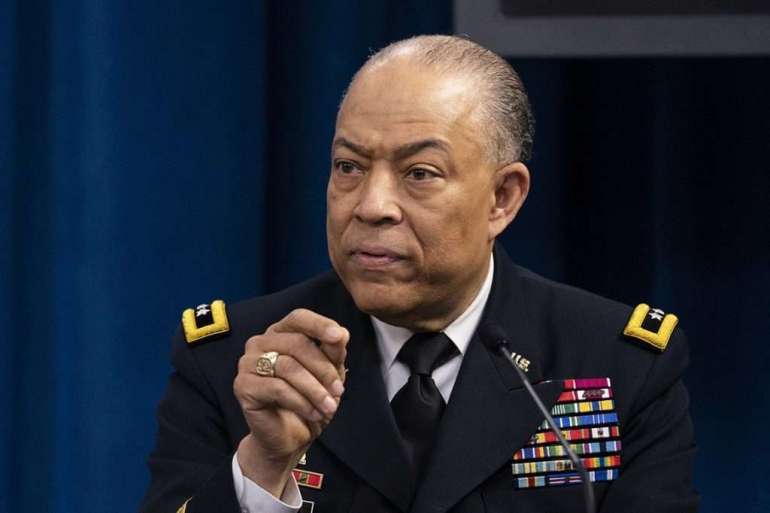 But Walker says he didn’t get approval until after 5 p.m. — well after rioters had overtaken the Capitol, sending lawmakers fleeing for safety. He singled out then-acting Defense Secretary Christopher Miller in particular as he described the slow-walking of Sund’s request.

“Consequently, at 5:20pm (in under 20 minutes) the District of Columbia National Guard arrived at the Capitol,” Walker wrote. “We helped to re-establish the security perimeter at the east side of the Capitol to facilitate the resumption of the Joint Session of Congress.”

Walker’s testimony adds a new piece to the puzzle of security lapses and miscommunications that enabled a violent mob to ransack the Capitol and delay the certification of the 2020 election results. He is the latest official to suggest that senior military leaders were partly responsible for tying the hands of the security officials on the ground as they hustled to respond to the threat.

Walker also agreed with Capitol security officials that Pentagon leaders gave a tepid response to urgent pleas for aid during a 2:30 p.m. call on Jan. 6.

“The Army senior leaders did not think it would look good” to send troops to the Capitol and also worried about further incitement of the violent mob, Walker said.

Acting Army Secretary Ryan McCarthy was not on the call, according to Walker even though others wanted him to be. Walker described that coordination as a stark contrast from the military’s response to civil unrest during racial justice protests over the summer, when McCarthy was in real-time contact with him about helping law enforcement.

Walker added that if the Pentagon had approved the request sooner, it would have made a significant difference in the security response: “We could have helped extend the perimeter and push back the crowd.”

Walker said the 2:30 p.m. call included Lt. Gen. Walter Piatt, who was among those worried about the optics of the guard at the Capitol, and Lt. Gen. Charles Flynn, who echoed those concerns. Flynn is the brother of former Trump national security adviser MIchael Flynn — a leading proponent for overturning the results of the election.

The three officials in charge of protecting lawmakers that day — Sund, former House Sergeant-at-Arms Paul Irving and former Senate Sergeant-at-Arms Michael Stenger — have accused the Pentagon of slow-walking their urgent requests for National Guard aid. They have described a 2:30 p.m. conference call on Jan. 6 during which one top military official indicated he was concerned about the “optics” of a heavily armed National Guard force protecting the Capitol and said he’d likely urge superiors to reject their request. It took several more hours for troops to arrive and help retake the Capitol.

Robert Salesses, a top Pentagon official who handles homeland defense, plans to push back against Walker’s account when he testifies later Wednesday. In written testimony, Salesses said Miller approved “full activation” for the D.C. National Guard at 3:04 p.m. Guardsmen were ordered to depart for the Capitol at 4:32 p.m., Salesses added.

Mark Milley, chair of the Joint Chiefs of Staff, is also backing up the Pentagon’s version of events. He told reporters Tuesday that the Pentagon reacted at “sprint speed” to the request for aid to Congress. Mobilizing a large force of guard troops in a few hours amounts to lightning quickness in military terms, he emphasized.

Walker’s account is the first official testimony from the executive branch on its response to the request for help from the Capitol. Other intelligence officials in charge of briefing law enforcement partners about looming threats are also set to testify in the Senate on Wednesday.

They include Melissa Smislova, a top Homeland Security official in charge of the Office of Intelligence and Analysis; Jill Sanborn, who leads the FBI’s Counterterrorism Division and Robert Salesses, the top Pentagon official responsible for homeland defense and global security.

Sund and other Capitol security officials have said the intelligence warnings they received in the days leading up to the Jan. 6 attack didn’t support the need to line up a significant National Guard presence.

Rather, they said, the available intelligence suggested that the volume of protesters would resemble turnout in November and December, when pro-Trump rallies sparked spasms of violence but were ultimately contained. Never, those former Capitol security officials said, did they anticipate an organized, coordinated assault on the legislative branch that would overwhelm the 1,200 officers on-site and result in a breach of the building.

Instead of seeking a robust National Guard presence in advance, those former Capitol security officials said they asked Walker to simply be ready should they need him. Walker, they said, offered to place 125 National Guard units in supportive roles, such as traffic duty, to help free Capitol Police for more direct engagements with protesters.

One of the sharpest points of disagreement among the three Capitol officials — all of whom resigned in the aftermath of the insurrection — is the timing of their requests for National Guard assistance, once it was clear the Capitol would be overrun. Sund, whose account has been backed up by acting Capitol Police Chief Yogananda Pittman, said he reached out to Irving at around 1 p.m. on Jan. 6 to seek permission to request National Guard assistance.

But Irving says he did not hear from Sund until 1:28 p.m. and did not receive a formal request for National Guard assistance until after 2 p.m., when Sund reached Irving and Stenger together. The hour-long gap in the officials’ recollections has propelled an ongoing dispute as Congress begins its investigation into the security response to the insurrection.

Also at issue is the intelligence assessment that led Capitol security officials to dismiss the need for preemptive National Guard support. An FBI intelligence assessment sent on Jan. 5 by the bureau’s Norfolk Field Office, which described those descending on D.C. as prepared for “war,” never reached top officials. And even if it had, they said, the information was largely culled from social media and was “raw” and “unverified.”

Nevertheless, Sund, Pittman and Washington, D.C.’s acting Police Chief Robert Contee III said the bureau hadn’t sounded a significant alarm about the intelligence that might have elevated it to their attention.

FBI Director Christopher Wray offered his agency’s timeline of events on Tuesday. Wray agreed that the intelligence was “uncorroborated” and said it underscores the challenge for investigators seeking to separate social media hyperbole from actionable information.

Sanborn added additional details about the FBI’s response to the Jan. 6 assault, telling lawmakers that FBI tactical teams helped respond to reports of explosive devices placed near the Republican and Democratic Party headquarters that day.

The hearing Wednesday came as Sund’s successor at the helm of the Capitol Police, Pittman, urged lawmakers for a $70 million increase in her department’s budget to respond to the gaps revealed by the insurrection. She said she’s seeking funds to revamp the department’s intelligence-sharing technology and to confront sharply rising threats against lawmakers, which have spiked more than 93 percent in the last year.

Pittman also described significant resources being afforded to officers affected by the Jan. 6 assault, including counseling for them and their families, hotel stays and hot meals.