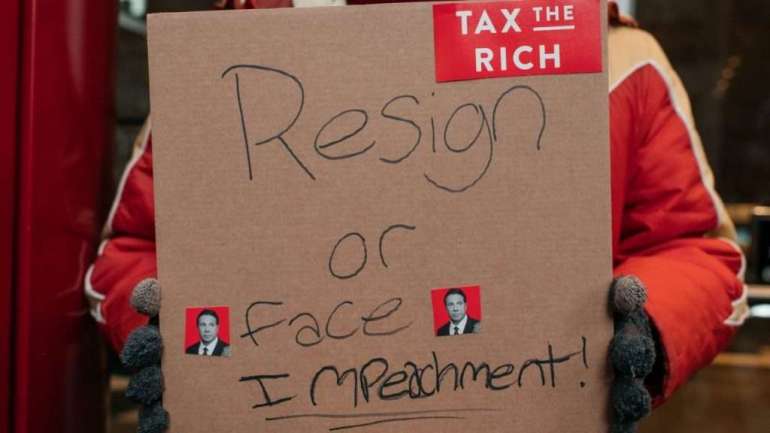 “I do not believe I have ever done anything in my public career that I am ashamed of,” he said.

Reporters called on to question him via Zoom did not ask if he still plans to run for a fourth term next year. The governor’s office controls who is selected in the virtual format, and none of the members of the Albany press corps who cover Cuomo daily was among the handful selected Wednesday.

Cuomo, a Democrat rounding out his third term, is facing growing calls for his resignation after former staffer Lindsey Boylan detailed allegations of sexual harassment against him last Wednesday. Two more women — former aide Charlotte Bennett and Anna Ruch, who met Cuomo for the first time at a wedding — have since accused the governor of making unwanted advances. The state Senate’s majority leader and a fellow Democrat, Andrea Stewart-Cousins, said later on Wednesday that “if the investigation shows something inappropriate did happen, I think he would have to resign.”

The governor said he fully supports “a woman’s right to come forward,” and apologized for acting “in a way that made people feel uncomfortable.” He said state Attorney General Tish James should complete her investigation into the allegations.

“This is what I want you to know and I want you to know this from me directly: I never touched anyone inappropriately,” he said “I never knew at the time that I was making anyone feel uncomfortable … And, I certainly never, ever meant to offend anyone or hurt anyone. Or cause anyone any pain.

“I ask the people of this state to wait for the facts from the attorney general’s report before forming an opinion.”

The most recent of the three women to come forward, Ruch, alleged that Cuomo, whom she did not know beforehand, made unwanted advances toward her at a wedding reception in 2019 and sought to kiss her after she removed his hand from her back. The New York Times published a photo of Cuomo with his hands around her face, capturing the episode.

At no point did Cuomo attempt to refute the specifics of any of the allegations against him, other than to deny any malign intent, and instead said his actions were out of step with evolving social norms. He promised to change his behavior in light of the women’s experiences.

“You can go find hundreds of pictures of me kissing people. Men, women; it is my usual and customary way of greeting,” he said. “However, what I also understand is it doesn’t matter. It doesn’t matter my intent. What matters is if it anybody was offended by it.”

Debra Katz, an attorney who is representing Cuomo’s second accuser, Bennett, blasted Cuomo’s comments as being “full of falsehoods and inaccurate information” contradicting their accounts. Bennett has said Cuomo repeatedly asked her intrusive personal questions, including whether she “had ever been with an older man.”

“We are confident that they made him aware of her complaint and we fully expect that the Attorney General’s investigation will demonstrate that Cuomo administration officials failed to act on Ms. Bennett’s serious allegations or to ensure that corrective measures were taken, in violation of their legal requirements,” Katz said in a statement.

Cuomo was out of the public eye for nearly a week before Wednesday’s appearance from the state Capitol, communicating through carefully prepared statements and issuing press releases on unrelated matters. His absence has put top Democrats in New York and Washington on the defensive during the intervening days. State Senate Majority Leader Andrea Stewart-Cousins (D-Yonkers) said on Wednesday afternoon that there is “just no place for some of the things he is apologizing for.”

In response to a reporter’s question, Cuomo also said he has taken the state-mandated sexual harassment prevention training but did not specify when.