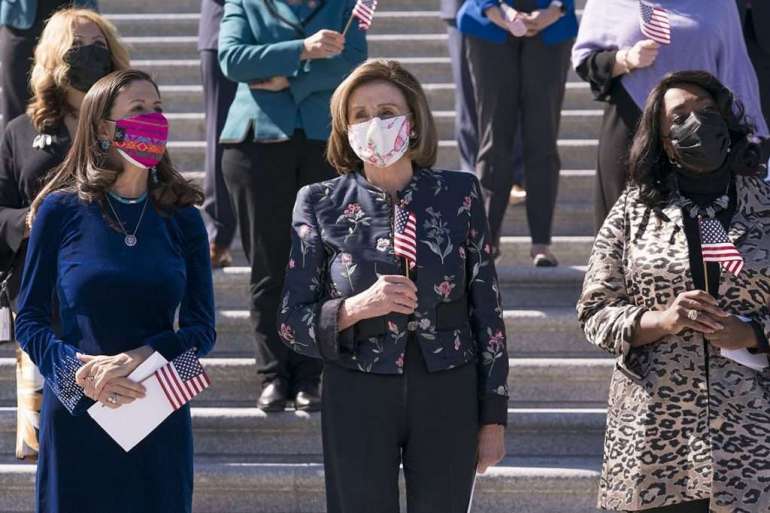 “At the same time as we are gathering here to honor our democracy, across the country over 200 bills are being put together, provisions they’re putting forward, to suppress the vote,” Pelosi said.

House Democrats passed a nearly identical bill, led by Rep. John Sarbanes (D-Md.), shortly after seizing back control of the chamber in 2019. No Republicans voted for the bill then.

This year’s passage was more complicated for Pelosi and her leadership team, with just a four-vote margin. Earlier this week, a group of moderates negotiated changes to one aspect of the bill — the public financing of elections — after facing intense criticism in their districts, in part because of a barrage of GOP attack ads that falsely claimed taxpayer funds would be paying for campaigns.

“If signed into law, H.R. 1 would be the greatest expansion of the federal government’s role in our elections than we have ever seen,” Rep. Rodney Davis (R-Ill.) said.

Democratic leaders also worked with senior members of the Congressional Black Caucus to resolve concerns over a redistricting provision. With concern about a state mandate to establish independent commissions on redistricting, Democrats ultimately agreed to provide more flexibility to states in the current round of redistricting, while still requiring that states meet certain standards to prevent extreme partisan gerrymandering.

The Senate, now in Democratic control, is expected to take up the bill, which will force Republicans — particularly those up for reelection in 2022 — on the record on the issue.

The bill, dubbed H.R. 1, is the first of multiple voting rights bills the House will consider this year. The House also plans to approve a bill, named for the late civil rights icon Rep. John Lewis, that would restore key parts of the landmark voting measure of 1965. Both bills’ fates are uncertain in the Senate, where they would require GOP votes.