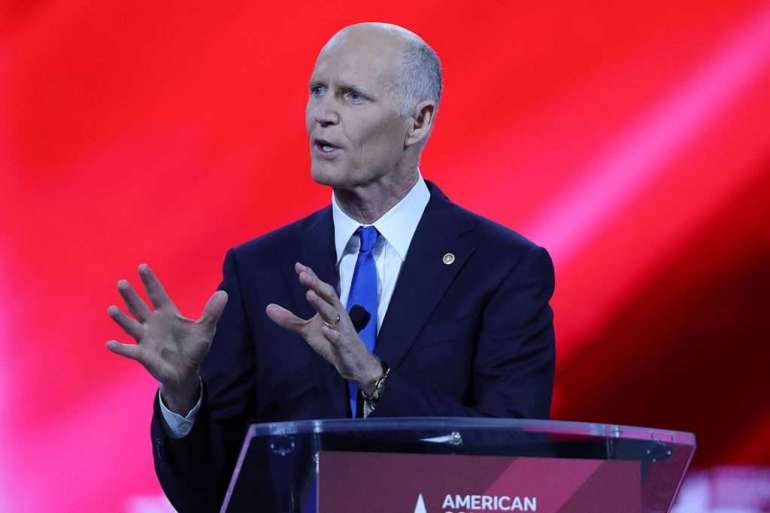 Though Scott has been unbeatable since first running for statewide office in 2010, the tone and direction of the GOP under Trump has shifted to a place outside of his comfort zone. Trump’s GOP is largely foreign to Scott, a former health care executive who embraces focus groups and adheres to the talking points of the day, not the off-the-cuff brashness Trump embraces. That, along with his well-known lack of charisma, could spell early trouble for Scott’s White House ambitions.

Scott, a former two-term Florida governor and now the state’s junior senator, was one of the first establishment-type politicians to back Trump’s bid for president. A tea party darling, Scott chaired a pro-Trump super PAC in 2016 that raised $20 million and, more recently, bashed Trump’s second impeachment trial, and challenged the certification of the 2020 election.

But in recent public remarks, Scott has created distance between himself and Trump. He claimed the Republican civil war is “cancelled” even as Trump openly plots revenge and potential primary challenges against GOP critics. As the new head of the GOP Senate’s campaign arm, he said he would favor incumbents over challengers, which largely closes the door on the organization supporting Trump-backed insurgents.

“In the eyes of Trump voters, Scott plays it too safe,” said state Rep. Anthony Sabatini, an Orlando-area Republican who sponsored a bill that would rename a stretch of Florida highway after Trump. “Sure he stands with Trump on a lot of votes and issues, but he’s not charging the hill on anything or pushing the conversation like others are.”

A pair of recent polls also shows Scott is having difficulty breaking through. Last weekend’s Conservative Political Action Conference straw poll had Scott at less than half a percent while Ron DeSantis, a longtime Scott rival, got 43 percent if the former president doesn’t run in 2024. In another poll taken last month by Florida Republican pollster Ryan Tyson, 69 percent of Republicans viewed Scott’s performance as strongly or somewhat favorable, compared to 84 percent for DeSantis, and 83 percent for Trump.

Scott was not even included in the poll looking at a potential 2024 field that does not include Trump done last month by GOP pollster Patrick Ruffini.

Some veterans of Florida politics, however, warn against paying too much attention to early 2024 numbers. Scott has been a giant over the past decade in Florida politics, and they have watched him use his vast wealth to knock off favored rivals in the past, and rack up an impressive 3-0 record in statewide political races, a number that jumps to 4-0 if you count Scott knocking off Republican establishment-favored Attorney General Bill McCollum in the 2010 GOP gubernatorial primary.

For them the message is clear: doubt Rick Scott at your own peril.

“I don’t know if CPAC is the most telling audience in the world for who is going to be the next nominee, or whatever,” said Brian Ballard, a Florida-based lobbyist who was close with Scott when he was governor and is a well-known Trump influencer. “Rick Scott has a political graveyard littered with opponents who did not take him seriously.”

“I think he will be able to resonate with Trump voters when the time comes,” Ballard added. “Just like Marco Rubio will. Just like Ted Cruz will. Everyone has their place.”

Chris Hartline, a spokesman for the National Republican Senatorial Committee who previously worked for Scott in his U.S. Senate office, said in a text message: “Rick Scott is focused on one thing — saving the country from socialism by winning back the U.S. Senate. Any suggestion or story beyond that is dumb.”

Susie Wiles, who has run both of Trump’s Florida campaigns and advised Scott in his past races, says that Scott will be able to break through with the Trump base when he focuses on his own politics again.

“Rick Scott is focused on being a senator right now, and outside of winning races for other Republican senators,” she said. “When he decides to focus on something else, he will be successful. He always has been.”

“His strength is in methodical execution of a strategic plan, and then living or dying by the results,” Burgess said. “That’s who he is, and if he decides to run for president in a few years, it will be because there are large numbers of Americans are hungry for that kind of leadership, not because he can ‘out-Trump’ other potential candidates.”

While Scott has struggled to gain traction among Trump’s most loyal voters as compared to other rising Republican stars, he has also shaken up establishment corners of the party. When taking over as head of NRSC, a handful of top staffers moved on and were replaced with Scott’s own longtime aides, according to two sources familiar with the matter. Scott replaced the staff without informing Senate leadership but after the heated Georgia runoffs that saw Democrats pick up two Senate seats and flip control of the chamber.

“He is trying to please two masters,” Fabrizio said. “In this day and age, I just don’t know how you do that.”

A Florida GOP consultant said that Scott’s failure to get traction with Trump voters and scuffles with the GOP’s more establishment could leave him somewhat politically rudderless headed into a 2022 election cycle where he will be charged with helming Republican Senate campaigns.

CLARIFICATION: This story has been updated to clarify that NRSC staffers were not fired and left after the Georgia runoffs.