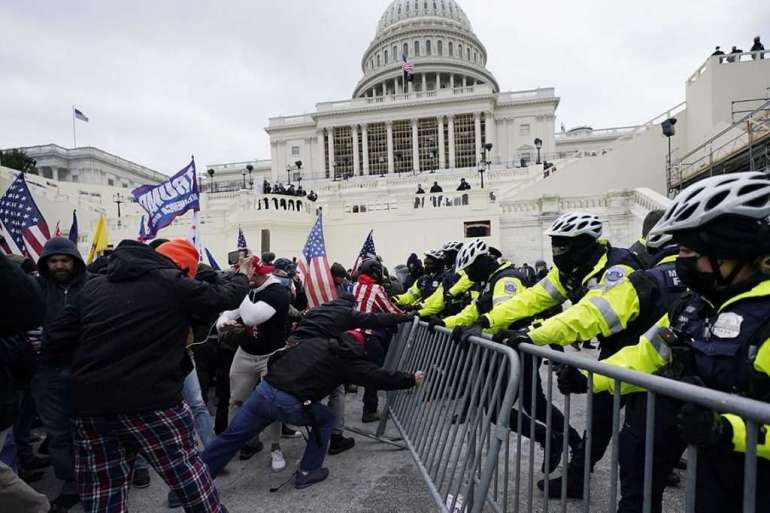 “FOR ALL YOU SHILLS, MSM LURKERS AND NORMIES VISITING TODAY – Q HAS TOLD US MARCH 4 IS A TRAP,” a user posted Thursday on GreatAwakening.win, one of the larger QAnon web forums. “THEREFORE ANYTHING THAT HAPPENS IS NOT US!!”

A week earlier, the message was the same on another large private QAnon channel on Telegram, an app that has increasingly become the home of right-wing extremists kicked off of Twitter and Facebook.

“Serious warning from Anon’s [sic]: Stay away from ANY event being held on March 4th!” a moderator wrote on February 26. “Something is potentially cooking and we don’t need to be a part of it. Any of it!”

As it turned out, social media mentions of the term “false flag” — an event orchestrated to make one’s enemies look culpable for acts of violence — skyrocketed in the days and weeks after the Jan. 6 Capitol riot. Inhabitants of QAnon safe spaces — forums, chat rooms, websites — became aware they were suddenly being monitored by law enforcement and media, alarming them in the run-up to March 4.

“A lot of them have been de-platformed, a lot of groups have shut down, a lot of people have been arrested, leaders in the movement have become subject of FBI interrogation, even arrest,” said Jared Holt, a research fellow at the Atlantic Council’s Digital Forensic Research Lab, where he specializes in following right-wing extremists. “So these groups are not in a place where they feel comfortable, in this moment, organizing any sort of mass event in the open. And if you can’t do it openly, you are automatically going to limit participation.”

For conspiracy theorists, “false flag operations” are a key concept that shapes their worldview. Shadowy forces are frequently said to be responsible for tragedies that are used to scapegoat others. From there, it wasn’t a difficult leap to suggest that the Jan. 6 insurrection was an inside job, too.

Across their few remaining social media platforms, QAnon followers kept reposting a screenshot of a 2019 message from “Q”, the mythical intelligence agent working against the Deep State, according to the QAnon conspiracy theory. In it, “Q” wrote a message that contained the words “March 4, 2018” and “trap” — which a user had circled in red.

The idea that so-called false flag operations would be used against them has circulated widely since before the Stop the Steal rally that preceded the Capitol insurrection. Right wing influencers warned that antifa or BLM activists would try to instigate fights while working undercover as MAGA supporters or Proud Boys. Infowars host Alex Jones and Rep. Matt Gaetz (R-Fla.), were among those claiming that the people inside the Capitol were actually antifa — with Gaetz himself pushing the theory on the Senate floor later that night.

As law enforcement agencies began warning of potential violence surrounding Biden’s inauguration, the MAGAsphere — which had built a sense of community around their meet-ups at Trump rallies — began urging each other to stop attending potential events on the weekend before Biden’s inauguration.

“Folks any of these so called peaceful armed protests at all the state capitals and DC Jan 17th is a set up by the left. DO NOT go! It is a trap!! Do not fall for it!,” tweeted Mark Taylor, a prominent far-right author, on January 12, which was retweeted nearly 9,000 times. “There will be false flags created by the left and blamed on the Patriots!“

But unlike Jan. 6 — the concrete, indisputable date of the actual ratification of the Electoral College results and thus the presidency — a March 4 inauguration had always rested on a nebulous theory, even by the standards of QAnon lore. That theory, based on a misreading of an 1871 law, claimed that March 4 was the actual, legal date of the inauguration, and that Biden had been falsely sworn in on January 20 — perhaps as a feint, or perhaps as president of a globalist-backed corporation.

Most QAnon influencers — such as Trump lawyers Lin Wood and Sidney Powell, or Ron Watkins, the former administrator of the QAnon message board 8kun — did not treat March 4 with any significance, unlike the date of the Capitol riot.

“The entire thing was based on a misreading of a law from 1871, and even major QAnon influencers weren’t buying into it, actively trying to persuade their followers that it was a hoax designed to make their movement look bad,” said Mike Rothschild, a QAnon researcher currently writing a book about the history of the movement. “It really had nothing in common with the January 6 insurrection — that was the culmination of years of Trump conspiracy theories that voter fraud was the only way Democrats could win the election.”

Influencers with smaller audiences, in fact, were actively trying to stamp the March 4 theory out as far back as January.

“Can’t help but get the feeling that these ‘March 4 true inauguration’ stories are planned disinfo being peddled by the [injected] anons to dupe people into spreading probably nonsense theories that make the whole movement look dumb,” one influencer said in a private channel on Feb. 10th.

Taken as a whole, the message was clear: stay at home and let others take the fall, if anything happened on that day at all. Even signs that Trump might have something planned were not to be acted on.

The author of QAlerts, whose website tracked every post that “Q” had ever posted on 8kun while it was still active, wrote a Gab post on Feb. 12 trying to decipher media reports that the Trump International Hotel in D.C. was fully booked. Noting that rooms were going for over $1,200 a night, the author surmised that there could be an inauguration — or perhaps Trump was trolling the media by jacking up his own prices. In any case, patience was urged.

“Just gonna watch it all play out in the time and way it is intended. If we know, then the enemy knows.”