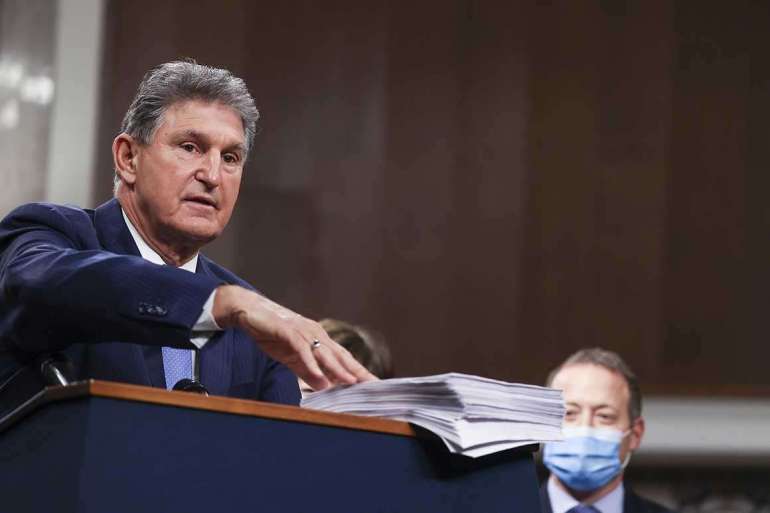 “If you want to make it a little bit more painful, make him stand there and talk,” Manchin said. “I’m willing to look at any way we can, but I’m not willing to take away the involvement of the minority.”

However, Manchin did not rule out using the budget reconciliation process to pass a voting rights bill with a simple majority, keeping the door open to a potential workaround for Democrats to push through a voting overhaul while preserving the filibuster. The House on Wednesday narrowly passed a sweeping package of election-related reforms, a proposal they’ve given the symbolically important designation of H.R. 1.

It’s not clear how Manchin envisioned that H.R. 1 could potentially be passed through reconciliation, as it is not budget-related, and Democrats’ proposed minimum wage increase was tripped up by the process’ strict rules and left on the cutting-room floor.

But Manchin said Democrats need to meaningfully engage with Republicans before going down that path, which they utilized late last week to pass a $1.9 trillion Covid relief package without a single GOP Senate vote.

“I’m not willing to go into reconciliation until we at least get bipartisanship or get working together or allow the Senate to do its job,” Manchin said on NBC’s “Meet the Press.”

“I’m not going to go there until my Republican friends have the ability to have their say also.”

Manchin insisted that he’s “not going to change my mind” on defending the filibuster, which effectively forces major legislation to clear a 60-vote threshold to pass the Senate and has come under heavy criticism from a number of Democratic members of Congress and outside allies as a major impediment to progressive policies. The Senate is now evenly divided, 50-50, with Vice President Kamala Harris able to cast the tiebreaking vote.

Sen. Alex Padilla (D-Calif.) said he anticipates enthusiasm for defending the filibuster may lessen if Republicans continue to use it to stymie Democratic priorities. In the meantime, he said the party will have to use reconciliation and other vehicles to pass their agenda.

“If we continue to see obstruction from our Republican colleagues — as we saw through this Covid relief package — I think the patience is going to wear thin, even on moderate Democrats,” Padilla said Sunday on CNN. “But we’ll see.”

Implementing the so-called “talking filibuster” appeared to strike a cord with Brian Fallon, executive director the the group Demand Justice and a onetime spokesperson for now-Senate Majority Leader Chuck Schumer, who tweeted that it had the potential to be the “ultimate solution here.”

“It preserves some ability for the minority to slow a bill as long as they physically hold the floor, but then allows an up-or-down vote once they give up. This is the Jimmy Stewart model,” he wrote, a reference to the 1939 movie “Mr. Smith Goes to Washington.”