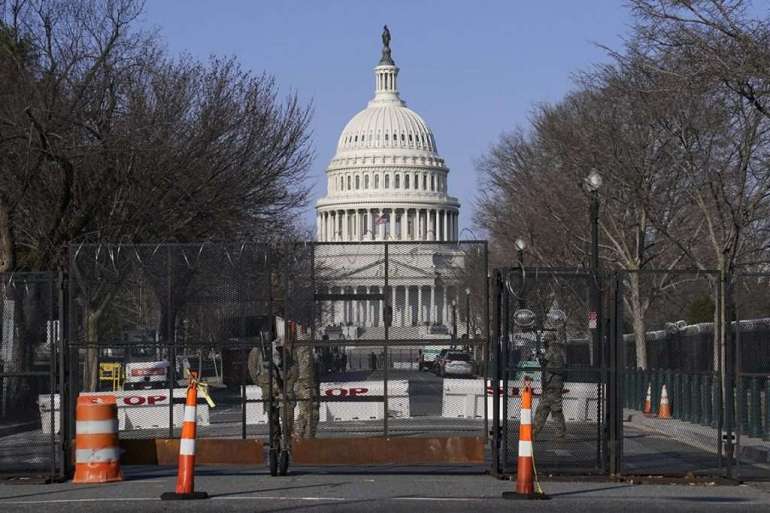 Honoré, in a letter accompanying the recommendations, acknowledged the challenge of limiting access to the Capitol in the process of securing it.

“Any security measure that reduces physical access to the Capitol Complex makes it less accessible to the public it serves,” Honoré and his team wrote. “As representatives of the people, Members understandably seek to be available to their constituents and transparent about their travel and activities, yet such openness can create physical security vulnerabilities.”

The proposed background checks of individuals who hold congressional IDs pose their own potential problems. House Republicans, 138 of whom voted to challenge certification of President Joe Biden’s victory even after the riot, are likely to chafe at the idea after a few Democrats suggested some in the GOP may have assisted insurrectionists.

Rep. Rodney Davis (R-Ill.), the top Republican on the House Administration Committee, said he’s not clear on what Honoré’s team was referring to with its recommendations to crack down on “insider threat risks” and he worries that focusing on dangers within the building, such as with magnetometers, are “taking precious resources away from our Capitol Police officers who need a break.”

Davis also nodded to what could be an even greater conflict than the partisan one: House and Senate disagreement.

“We need bicameral buy in to implement the commonsense recommendations that his team has put forward,” Davis said. “But we seem to have a difference of opinion on addressing many important issues just between the north and south side of the Capitol It’s not an imaginary force field when you walk from the Senate to the House.”Those differences, he said, may have contributed to delays in the security response on Jan. 6.

While Honoré’s review raises tensions among lawmakers who have been surrounded by National Guard troops, fencing and razor wire since the insurrection, the reviewer himself has drawn barbs from Republicans for comments accusing some GOP lawmakers and Capitol Police officials of complicity in the attack. House GOP Leader Kevin McCarthy has argued that he worries Honoré’s recommendation would permanently turn the Capitol into a “fortress.”

As Honoré briefed throughout the day Monday, the personal nature of the Jan. 6 attacks — and the other threats members have faced in recent months — came into sharp relief.

“I was at the airport and I had 20 people around me screaming at me in my face,” Rep. Lou Correa (D-Calif.) recounted of a flight home after Jan. 6, suggesting that the confrontation exceeded any legitimate claim of First Amendment protest. “That’s an assault by any definition of assault.”

Correa said he plans to get a “third German Shepherd” for his family’s safety.

“There is no doubt, member security is clearly in jeopardy,” Rep. Sheila Jackson Lee (D-Texas) told reporters. “The world has changed.”

Pelosi set in motion Honoré’s review as part of an initial bid to shore up overtaxed Capitol Police and identify shortcomings in the capacity of the force, District of Columbia law enforcement and other federal agencies to aid in an emergency. Officials on Honoré’s team include retired Lt. Gen. Jeffrey Buchanan, who helped organize aid to Puerto Rico after Hurricane Maria, and Mary McCord, a former acting assistant attorney general for national security.

The group’s most significant recommendation is the establishment of a “dedicated quick reaction force” for all of Washington D.C. to respond to developing crises. Honoré’s team proposed three options: a force consisting of multiple law enforcement agencies that is granted legal authorities and funding; a force run by the D.C. National Guard that draws from National Guard units across the country; and a permanent military police battalion housed within the D.C. National Guard.

Honoré also suggested adding 874 new positions within the Capitol Police to cut down on overtime — which stretched to 720,000 hours in the last fiscal year, they found, an “unsustainable” dynamic.

“[I]t leaves the force with no ability to pull officers from the line to train at the individual, leader, or collective level or to prepare for evolving threats,” they wrote.

The retired military leader’s team found that the Capitol Police’s ability to process intelligence about the rising volume of threats against lawmakers is inadequate.

“Individuals and groups advocating extremist views actively use the internet to propagandize, recruit, radicalize, and organize political violence such as the Capitol Attack,” they wrote in their report. “Some also target Members with threats of violence. The USCP is not postured to track, assess, plan against, or respond to this plethora of threats due to significant capacity shortfalls, inadequate training, immature processes, and an operating culture that is not intelligence-driven.”

The Capitol Police Board — the obscure entity that includes the USCP chief, as well as House and Senate security officials and the architect of the Capitol — would also undergo a major overhaul to make it less cumbersome during a crisis as part of Honoré’s recommendations. That would include, in part, empowering the Capitol Police chief to act unilaterally in response to threats.

Among other Honoré recommendations:

— Establishing an “unblinking” monitoring system of cameras and other sensors to help slow and track emerging threats to the building.

— Better route planning for Capitol evacuations during an emergency.

Honoré also delved into what is likely to be a controversial subject: enhanced background checks to prevent any “insider threat.”

“Requiring background checks for identification card holders and employing card readers more widely throughout the complex would decrease insider threat risks and enhance the safety of all Members, staff, and legislative employees,” his group concluded.

That recommendations comes amid ongoing Democratic allegations that some Republicans may have wittingly or unwittingly aided the Jan. 6 riots, either by stoking then-President Donald Trump’s false claims that the election had been stolen or by encouraging people to march on D.C. amid Trump’s calls to stop Congress from certifying his defeat. Honoré recommended pushing Capitol screening further back from the building and adding more “screening portals” throughout the complex.

Aside from security within the Capitol complex, Honoré also addressed security for lawmakers while they’re traveling or in their districts. Though current protocols provide for security for legislative leaders, rank-and-file members often have “limited or inconsistent protection at their homes, in their districts, and while in transit,” his advisers found.

They recommended establishing a “threat-based” system for providing security to non-leadership members, and the establishment of a “Member Travel Operations Center” to manage security for lawmakers while in transit. District offices should also be upgraded to ensure a “uniform” level of monitoring and safety.