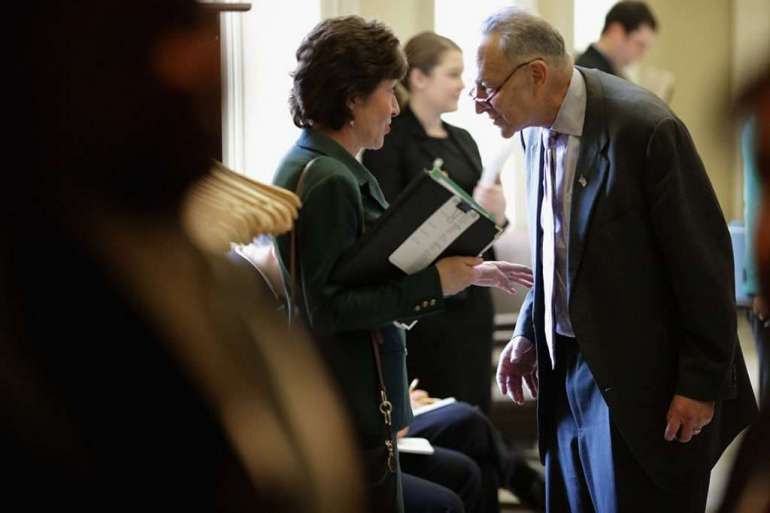 Collins was not pleased to be singled out in such a manner. In an interview, she called Schumer’s comments an “extraordinary” backhanding of his most natural ally across the aisle. And she said there’s been zero contact with the Democratic leader since the election: “He has not spoken to me, no.”

“Why Chuck seems to be going out of his way to alienate the most bipartisan member of the Senate is a mystery to me,” Collins said. “And it must just reflect his extraordinary frustration at having wasted $100 million in the state of Maine in an attempt to defeat me. And for me to win by a strong margin.”

Collins maintains good relationships with a number of Senate Democrats despite the party’s campaign to defeat her last year. She’s also held four phone calls with President Joe Biden since his inauguration and even organized GOP senators to join what became his first major Oval Office meeting.

But unless Senate Democrats can muscle through a unilateral rules change to end the legislative filibuster, Collins’ vote will probably also become a sought-after prize for Schumer. She enjoyed a warmer relationship with his predecessor, former Sen. Harry Reid (D-Nev.), but has criticized Schumer’s handling of the minimum wage issue and his use of party-line reconciliation to pass the coronavirus legislation.

Their beef began in earnest when Schumer decided to target Collins in a campaign that became exceedingly personal down the stretch. Both Collins’ and Democratic candidate Sara Gideon’s husbands were the targets of negative ads, and spending on the race swamped Vacationland like no previous Senate contest.

Still, there’s no mystery to why Schumer chose to play in Maine: It truly looked like one of Democrats’ best pick-up opportunities last fall. That was before Collins, despite trailing in the polls down the stretch, romped to victory by nine points — a win that at the time that looked like it cost Schumer the majority.

Then Democrats snagged two stunning runoff victories in Georgia, making Schumer majority leader. And since then, he’s made no apparent effort to mend fences with Collins despite her yearning to play a productive role in bipartisan deal-making.

China’s doing them. Europe’s considering them. But they could amplify global inequities. POLITICO’s Carmen Paun breaks down the pros and cons of vaccine passports.

“If I had been in his shoes, I would have acted differently and done outreach to say: ‘Well, I tried to knock you off three times. It didn’t work. I hope we can still work together,’” Collins said.

Schumer declined on Wednesday to repeat his comments about Collins from Tuesday night’s CNN interview. He would say only that Democrats’ “No. 1 job is to pass a big bold agenda, and we’ll work with any Republican we can to get that done.” He would not address the notion that criticizing Collins could hurt his prospects of executing on that agenda.

“Dumb, dumb, dumb,” said Sen. John Cornyn (R-Texas), a former GOP whip who, during the Trump years, had the unenviable task of trying to convince Collins to vote for things like Obamacare repeal. “Sen. Collins is the most likely Republican to engage in a bipartisan negotiation. Why you would go out of your way to intentionally alienate her is dumb.”

Sen. Lisa Murkowski (R-Alaska) said that Schumer “didn’t make any point to hide that he was directing pretty substantial campaign resources against” Collins, a close friend. The two GOP centrists sit next to each other on the Senate floor.

“I would imagine she took it personally. And I do think it’s unfortunate there isn’t a better relationship,” added Murkowski, who has met privately with Schumer to discuss working together.

Party leaders targeting the Senate’s dwindling set of moderates is nothing new. But those efforts have historically not helped the chamber overcome its partisan gridlock. Senate GOP Leader Mitch McConnell sought to oust five centrist Democrats in 2018, though Sens. Joe Manchin (W.Va.) and Jon Tester (Mont.) survived. Manchin has not exactly been a McConnell cheerleader in the years since.

Notably, Senate Democrats did not echo Schumer’s targeting of Collins on Wednesday. Several said they had no intention of getting in the middle of the feud, but that moving on from tough losses is a part of Senate life.

“John McCain came and campaigned hard against me in 2012. And I ended up working closely with him. That’s part of politics here,” said Sen. Chris Murphy (D-Conn.).

While making clear he is not taking sides, Murphy said that the path to 60 votes runs through the senior senator from Maine: “If there’s any hope of getting bipartisan things done here, Susan’s going to be instrumental.”

Although Democrats declined to single out Collins in interviews on Wednesday, they agreed with Schumer’s general sentiment that chasing bipartisanship in the past cost them effective legislation during the economic crisis.

“Do I specifically think Susan Collins made [the stimulus] too small? I’m not singling out any one person. But it was inadequate to the task, which is why we did the bill we just did,” said Sen. Jeff Merkley (D-Ore.). “When there’s a Democrat in the Oval Office, Mitch isn’t interested in encouraging his team to to work together.”

Yet Collins quibbled with Schumer’s recollection on Tuesday of their work together on the stimulus in 2009.

“President Biden thanked me for my vote” at the time, when he was serving as vice president, she said. “So, for Sen. Schumer to now say that this was a huge mistake and try to blame me, when he was in leadership and helping with the negotiations and voted the same way, it’s bizarre. It makes no sense.”

Thus far, Collins has voted for all of Biden’s nominees, though she did announce opposition to Neera Tanden’s failed nomination to lead his Office of Management and Budget after Manchin announced he would vote no. Her courtship of Biden on the coronavirus package was unsuccessful largely because Republicans started their offer at a bill roughly one-third of where Biden was.

Democrats can only use reconciliation once more this year, and there are potential compromises to be had with Collins on everything from the minimum wage to background checks to immigration. But it might not go through Schumer.

“I know she’s picking and choosing her causes. And I haven’t given up on working with her at all,” said Senate Majority Whip Dick Durbin (D-Ill.).

He chose not to respond to Schumer and Collins’ remarks about each other.