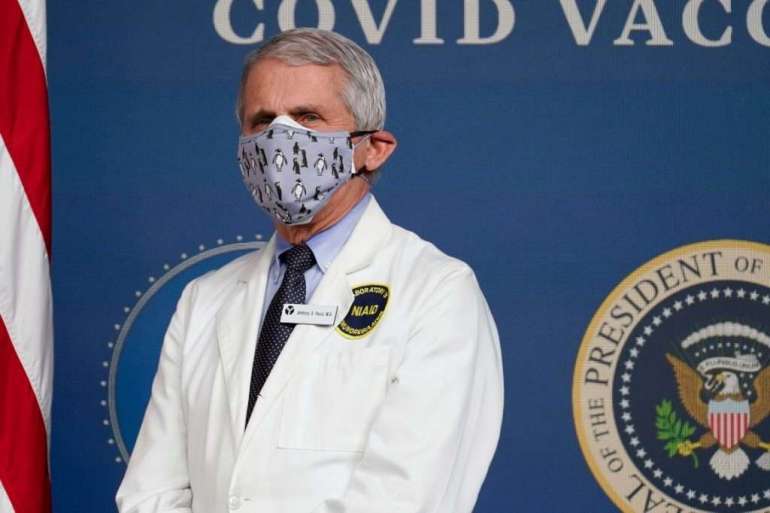 “When you see [infections] plateauing at a level of anywhere between 50,000 and 65,000 cases a day, that is absolutely no time to declare victory, because we know from previous surges that we’ve had over the year that when you see that leveling off at a high level, there’s always the risk of a surge back up,” Fauci said. “And in fact, unfortunately, that is exactly what’s happening in Europe right now.”

Fauci elaborated on his concerns about Europe in an interview on CNN’s “State of the Union”: “They had a diminution of cases, they plateaued, and they pulled back on public health measures. You see the pictures in the paper and on TV. They have opened the restaurants. They have opened some of the bars. The younger people particularly stopped wearing masks, and then, all of a sudden, you have a surge that went right back up.”

Biden, in a prime-time speech on Thursday, asked states to make all adults eligible for vaccines by May 1 and said that by July Fourth, there’s a “good chance” Americans will be able to gather to celebrate Independence Day. While Fauci said he doesn’t see any “stumbling blocks” in that, he cautioned that an increase in Covid-19 infections could push back when Americans can return to some of their normal routines.

“If the surge back up comes, that would endanger the goal of getting people much more toward normal in the beginning of the summer,” Fauci said on “Fox News Sunday.” “It’s not going to influence the vaccination program or the vaccination rate, but it could influence how soon we get back to normal.”

Some states, including Texas and Mississippi, have lifted mask mandates and moved to fully reopen businesses, a move Fauci called “risky and potentially dangerous.” Other states, such as Maryland, have retained mask mandates but removed limits on capacity for business.

“If you look at the numbers, we are not out of the woods yet,” he cautioned.