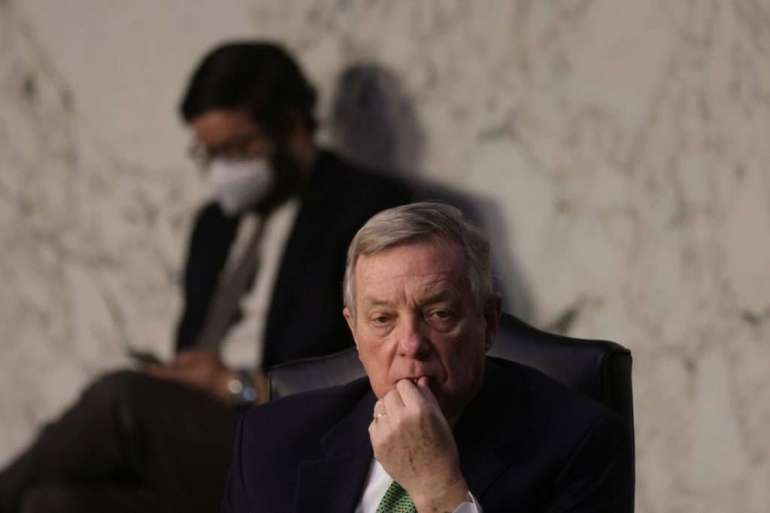 Durbin never ascended to lead the Democratic caucus but is now one of the party’s most important members in Washington under President Joe Biden. He’s also got two of its toughest jobs, counting votes in a 50-50 Senate while running the committee that considers some of the White House’s top priorities. If Durbin stumbles in either of his dual roles, the success of Biden’s agenda is almost instantly on the line, especially as the president prepares to roll out nominees as soon as this week to the judiciary and Justice Department.

That’s not to mention the pressure on the affable Illinoisan to please both the progressive and establishment wings of his party after Feinstein’s often-underwhelming performance as the top Democrat on the Judiciary panel.

While the 76-year old now wields a lot of power, Durbin says he “of course” struggled with whether to even run for a fifth Senate term last year after nearly four decades in Congress. Among the factors he considered were age, physical and mental health and, at the top of his list, his wife’s views.

“I feel like I’m in pretty good shape … and I still have an appetite for achieving a lot of things that I’ve been unable to do so far,” he said, naming the DREAM Act to help undocumented immigrants brought to the country as children as a top priority. “That’s why this Judiciary Committee assignment was so important. I thought: ‘I’ll never have a better opportunity to really chart my own course on some of these major issues.’”

Of course, his path is a bit of a logistical nightmare. Durbin is helping Biden stock the bench while making sure the president doesn’t lose any floor votes. Asked how the senator who beat him is balancing it all, Whitehouse responded: “We’ll see.”

Durbin is known for his close relationships on both sides of the aisle and his long gaggles with reporters. He’s often seen walking around without his security detail, but Senate Republicans warn that despite his laid-back appearance, Durbin is no pushover.

“He’s very smart. And a worthy adversary,” said Sen. John Cornyn (R-Texas), a member of the Judiciary Committee and former majority whip. “He has a demeanor, though, that is kind of disarming. So you have to stay vigilant as his adversary.”

Durbin describes his battle with Whitehouse as the hardest election he’s ever faced because he “knew all the voters” and saw them every day. But it wasn’t Durbin’s first intra-party tango. He jockeyed against now-Majority Leader Sen. Chuck Schumer in 2010 when former Democratic leader Harry Reid was in danger of losing his seat. He also nearly faced a challenge from Sen. Patty Murray (D-Wash.) in 2016 for the whip’s post.

While Durbin has been majority whip before, it’s his first time playing the role under Schumer, who he says has a different style than Reid and relies more on staff. Durbin has the advantage of being once the New York Democrat’s longtime roommate, and their bond shows in public: When Schumer began singing an oldies tune before a recent press conference, Durbin playfully rolled his eyes at his colleague’s antics.

Schumer also has a larger leadership team than Reid did, allowing the whip to share some vote-wrangling responsibilities. In fact, the majority leader’s oft-cited habit of dialing members on his flip phone means Schumer is often dealing directly with Sen. Joe Manchin, the caucus’ most consistent swing vote. When Manchin’s uncertainty over a Democratic deal on unemployment insurance halted floor activity for hours on Biden’s coronavirus recovery bill, Durbin told reporters he did not know where the West Virginia Democrat would come down.

Durbin said “there’s secrecy associated with both” Schumer and Reid, but that the goal of the whip operation under the current majority is serving Schumer efficiently whenever he calls for a whip count. Durbin himself also now has an expanded team of senators to help, which comes in handy during long voting stretches.

“He really has to kind of hit warp speed because we’re in the majority,” Sen. Tim Kaine (D-Va.) said of the whip. “And one of the things I like is that he’s kind of got informally designated deputies who are helping him.”

Durbin’s double act isn’t going to get easier. The Judiciary Committee will soon pick up the pace on Justice Department and judicial nominees, with 72 federal judicial vacancies including two on the powerful D.C. Circuit Court of Appeals. The panel’s new chair is keeping staff on board in case a Supreme Court seat opens up and staying in regular touch with Biden.

On top of overseeing confirmations, the list of issues facing Durbin’s committee is long, from gun violence to dark money to domestic terrorism to criminal justice, in addition to his longtime goal of immigration reform. (Durbin keeps his mother’s naturalization certificate displayed in his office.)

The Judiciary Committee is Durbin’s first gavel after more than two decades in the Senate, where he started out as a college intern. Since winning the chair’s race, Durbin has been reaching out to Republican and Democratic committee members alike. As one might expect, just about everyone seems to have a story about him.

Sen. Jon Ossoff (D-Ga.) said when he and Durbin met in his office, they discussed their shared Lithuanian heritage. Sen. Cory Booker (D-N.J.) remembers his colleague and mentor singling him out at a White House meeting on criminal justice reform when he was a freshman. Sen. Chuck Grassley (R-Iowa), Durbin’s opposite number on Judiciary, said he still jokes about using the Democrat’s words of praise in his 1986 reelection campaign.

“The union people called [Durbin] up and said, ‘What are you supporting Grassley for?” the Iowan recalled. Durbin then asked Grassley to return the favor and say something positive about him for his reelection. Grassley handed a piece of paper to Durbin that said, “He’s not as bad as you think he is.”

The panel is home to four potential 2024 GOP presidential candidates and Republicans are skeptical that much bipartisan work can get done, outside of a smaller-scale criminal justice reform bill. Even the panel’s vote on Merrick Garland’s nomination for attorney general is telling. Despite a push from Durbin to move quickly on Garland’s nomination, seven Republicans still voted against him.

Sen. Ted Cruz (R-Texas), a committee member, described Durbin as a “partisan cheerleader” when it came to Garland’s confirmation as well as during a recent argument they had on the floor over whether undocumented immigrants would receive stimulus checks. Cruz said he is still waiting for an apology from Durbin.

With the filibuster remaining intact for now, Durbin acknowledges the reality that Democrats are “one heartbeat away from the minority” and that he will need Republican buy-in for any major priority, including immigration. Only two Republicans remain in the Senate from the 2013 “Gang of Eight” that helped craft a bipartisan immigration measure, and the GOP argues that any deal would need a border security element given the nation’s growing migration crisis.

“If I told you some of the people I was talking to,” Durbin acknowledged, “you’d say: ‘You got to be wasting your time.’… I’m setting out to prove that I can do it and come up with 60 votes.”