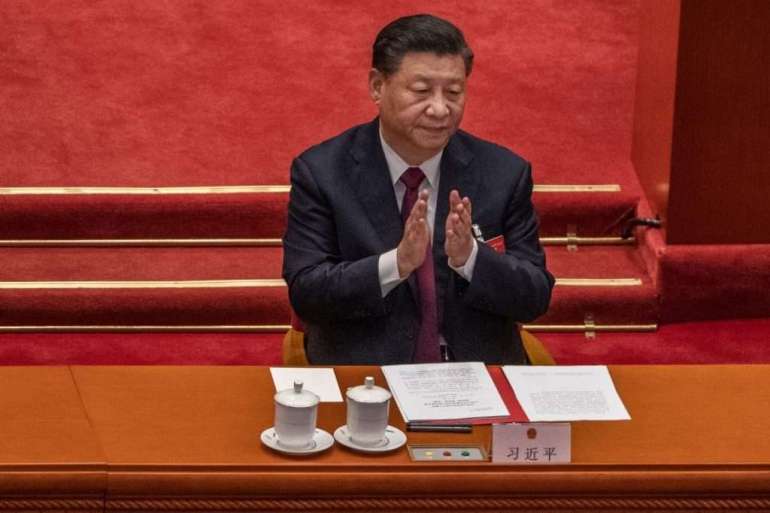 “War over Taiwan would be unthinkable,” said Eric Sayers, a visiting fellow at the American Enterprise Institute. “A major challenge Washington faces is that Taiwan has been viewed by many as a 2035 planning problem. … The [Chinese army’s] capabilities have now matured to such a degree that this is no longer a dilemma we can afford to push off.”

How to prevent that scenario, though, is a question that has confounded previous U.S. administrations, as China each year appears to move one step closer to moving on Taiwan. The new Biden team must signal its willingness to go to the mat for Taiwan and help ensure the island can defend itself, but without further spooking Beijing.

“If we interject ourselves, we are the reagent catalyst that will make this problem hotter,” said one senior defense official, who asked to remain anonymous to discuss sensitive operational planning. “Militarily we know that if we do too much, push too hard, China will use that optic and they will do more against Taiwan.”

However, Trump also indicated America might not come to Taipei’s defense in the event of a Chinese invasion, reportedly telling a Republican senator in 2019 that “Taiwan is like two feet from China. … We are eight thousand miles away. If they invade, there isn’t a f—ing thing we can do about it.”

The new Biden team knows the U.S. is in a competition with China, and Beijing’s coercion of Taiwan will be a major point of discussion. For now, they are keeping pressure on Beijing applied by Trump through tariffs and sanctions. Defense Secretary Lloyd Austin and Secretary of State Antony Blinken are in Japan for the first stop on a joint visit to Asia, where countering China’s rise will be at the top of the agenda. The two will travel next to South Korea, before Austin heads to India and Blinken to Alaska, where he will be joined by national security adviser Jake Sullivan.

Washington and Taipei have robust economic ties but do not have formal diplomatic relations. The Trump administration sought to strengthen this relationship with controversial arms sales and senior-level visits. Officially, the United States has a “One China” policy that recognizes China and Taiwan’s historic connection but has consistently opposed the coerced resolution of the status of the island.

Biden has given some early indications that he will continue that outreach toward Taiwan, inviting the island’s de facto ambassador to attend the U.S. presidential inauguration for the first time and raising his concerns about Beijing’s pressure against Taipei in a call with his Chinese counterpart, Xi Jinping.

Adm. Phil Davidson, head of U.S. forces in the Pacific, warned in testimony to Congress last week that China could invade Taiwan by 2027 — a significant acceleration compared to officials’ previous estimates of 2035.

“Preparing for Taiwan contingencies has been a focus in China’s military modernization for some time, so as their capabilities are increasing, obviously, we are paying very careful attention to the military balance in the Taiwan Strait,” David Helvey, the acting assistant secretary of defense for Indo-Pacific security affairs, told reporters traveling with Austin to Japan.

Officials came to that conclusion after watching China over the last few years increase its military capability while taking more risks on the world stage, from attacking Indian forces on the disputed line of control in the Himalayas to cracking down on protesters in Hong Kong. Xi’s increasingly aggressive moves, both on military and political fronts, signal that an invasion of Taiwan could be imminent, the senior defense official said.

Despite a global pandemic, in 2020 China commissioned 25 advanced new ships, including cruisers, destroyers and ballistic missile submarines — capabilities designed to keep America and its allies that might interfere on Taiwan’s behalf at bay, a second senior defense official said. Meanwhile, Beijing is integrating its new equipment into an increasingly sophisticated force, demonstrated in a loudly publicized live-fire event last fall in which Chinese forces took out an “enemy” with ballistic missiles, and developing a theater command structure much like that of the U.S. military.

“China has built a global-sized navy for a regional mission,” the second official said. “We look at the capacity that they’ve built and it’s impressive and it’s increasingly to their advantage … we just don’t have the same kind of capabilities against China that we used to because of numbers.”

At the same time, several upcoming milestones may help pinpoint the timing of a potential invasion. China accelerated its timeline for modernizing its army from 2035 to 2027 — the group’s 100-year anniversary. That year is also the conclusion of Xi’s presumed third term.

“None of those are definitive and says, ‘We think we’re going to go by here,’ but we think that the circumstances become more viable in the near term,” the second defense official said. “If we look only at the longstanding Chinese messaging of 2035 at the soonest, 2049 realistically for a world class military, we are deceiving ourselves and we run the risk of falling into a misdirection from Beijing.”

Meanwhile, officials are increasingly concerned that Taipei may force Beijing into action by unilaterally declaring its independence, particularly after Taiwan’s president was reelected in a landslide last year. Polling data consistently shows the Taiwanese people want a separate identity that is not Chinese, the second official said.

Short of an invasion, military officials are also concerned that China could effectively occupy Taiwan under the pretext of offering humanitarian aid.

“The nightmare scenario is a typhoon goes through Taiwan,” the first official said. Beijing then moves in “under good pretenses to help out, and never leaves.”

The Trump administration exacerbated the Taiwan problem, the second official said. Trump sought to use Taipei as a cudgel against Beijing during the tariff-driven trade war he launched against China, increasing the number of senior-level visits and publicizing arms sales and an anti-China military strategy.

“It played into China’s sense that things were changing and that it might necessitate more of a physical counter were it to continue to trend in the wrong direction,” the second defense official said.

So what’s the answer? Top U.S. and Japanese officials are expected to send a strong message to their Chinese counterparts over Beijing’s coercive measures in the region during the Alaska summit. The U.S. can’t afford to do nothing, as China pressures Taiwan on both the military and economic fronts. Every day, Beijing sends fighter aircraft into Taiwan’s air identification zone with the intention of burning out Taipei’s small, U.S.-made F-16 force, and recently conducted military exercises in the Taiwan Strait.

Sayers urged the new administration to increase investment in its forward-based forces in the Pacific, strengthen ties with Japan and Australia to deter Beijing, and take steps to bolster Taiwan’s defenses.

“The United States needs to expeditiously ensure it has a force in place that will convince Beijing that it cannot be successful if it resorts to military coercion to resolve its political dispute with Taipei,” Sayers said. “No one is calling for a strategy to dominate in a military conflict, but instead to deter by denying Beijing its military objectives.

But one wrong step could be the trigger for Beijing to act.

“If we were to all of a sudden militarize the engagement, if we were to do a lot more to push back on China, if [Taiwan’s] government declares independence — those are all bellwether events that could significantly alter the facts or the assumptions that we have about a military crisis,” said the first senior defense official.