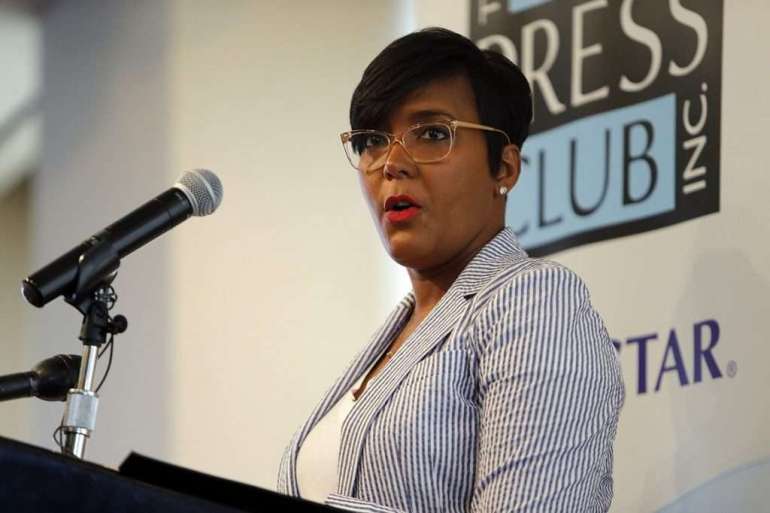 Captain Jay Baker of the Cherokee County sheriff’s office said that the man claims to have a sex addiction and that the businesses were a “temptation for him that he wanted to eliminate.”

“It is still early on, but those were comments that he made,” Baker said, adding that investigators have not found a potential political or religious motivation for the attacks.

The shootings Tuesday came amid heightened concern about a rise in hate crimes against people of Asian descent in recent months and immediately posed questions about why the particular businesses were targeted. At least one victim survived the attack but remains hospitalized.

The man, Robert Aaron Long, has been charged with four counts of murder and one count of aggravated assault in Cherokee County, part of the Atlanta metro area where one of the businesses was located. Additional charges are expected to follow related to the two shootings that occurred within the city.

Bottoms said that regardless of what fueled the violence, the fear and outrage it induced needs to be addressed.

“Whatever the motivation was for this guy, we know that many of the victims, [the] majority of the victims were Asian,” she said. “We also know that this is an issue that is happening across the country. It is unacceptable. It is hateful, and it has to stop.”

The Atlanta mayor said she has been in contact with the White House in the aftermath of the shootings, and the Biden administration said early Wednesday that the president had been briefed on the “horrific” situation.

President Joe Biden said Wednesday afternoon that he has been in touch with Attorney General Merrick Garland and FBI Director Christopher Wray about the situation and acknowledged the concern expressed by the AAPI community.

“I have been speaking about the brutality against Asian-Americans, and it’s troubling,” Biden said from the Oval Office. “I’ll have more to say when the investigation is completed.”

Earlier in the day Vice President Kamala Harris said the string of shootings was “tragic.”

“It speaks to a larger issue, which is the issue of violence in our country, and what we must do to never tolerate it and to always speak out against it,” the vice president said. “I do want to say to our Asian-American community that we stand with you and understand how this has frightened and shocked and outraged all people.”

Sen. Jon Ossoff (D-Ga.) released a statement Wednesday saying he is “heartbroken” for the victims and their families.

“While the motive for last night’s terrible violence remains under investigation, I express my love and support for and stand in solidarity with the Asian-American community, which has endured a shocking increase in violence and harassment over the last year,” Ossoff said.

Numerous Asian-American political figures expressed outrage at Tuesday’s shootings, as well as the animus directed at Asians within the United States.

Andrew Yang, a leading New York City mayoral candidate, said the tragedy underscores the need for additional resources to combat anti-Asian hate crimes and that he did not believe that race was a non-factor in Georgia.

“We should be treating hate crimes as such,” he said in Times Square on Wednesday. “And make no mistake, these women were targeted on the basis of their race.”

Yang’s wife, Evelyn, similarly dismissed the idea that the locations of the shootings can be separated from the victim’s identities.

“If you target massage parlors you are targeting Asian women,” she wrote in a tweet. “I appreciate all the supportive sentiment out there but let’s be clear in calling this what it is — a hate crime.”

Rep. Grace Meng (D-N.Y.) blamed former President Donald Trump for stoking some of the anti-Asian sentiment. The former president and some of his aides repeatedly used the racist term “kung flu” in reference to the coronavirus and frequently labeled it the “China virus.” Trump invoked the latter as recently as Tuesday night in a Fox News interview that aired as news was starting to emerge about the shootings.

“We feel that we have been invisible,” Meng, who is of Tawainese descent, said on MSNBC. “We are so hurt about what happened last night in Atlanta, but also hurt about this yearslong-worth of hateful incidents and hate crimes that have skyrocketed across the country.