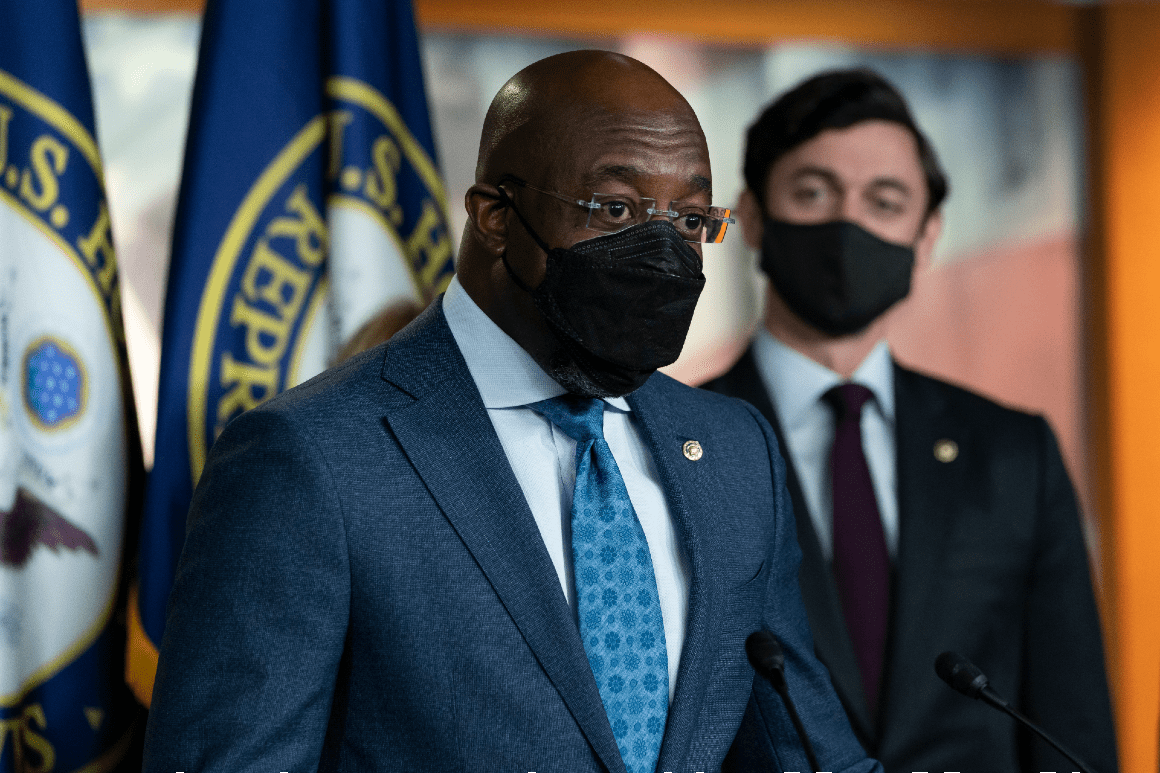 Meanwhile, lawmakers within the Georgia legislature and on Capitol Hill conveyed deepening frustration over the attacks after a year of racial animus directed toward Asian Americans amid the coronavirus pandemic.

On Thursday morning, Sen. Raphael Warnock (D-Ga.) concluded that the man suspected of killing eight people at the local businesses — including six people of Asian descent and seven women — was driven by “hate” to commit the acts of violence.

“We will hear, I guess, his explanation in the days ahead,” Warnock told MSNBC. “But we know hate when we see it. We’ll get into the nuances of it, but only hate drives you to take eight precious lives in the way that he did.”

The senator added that he was “more interested in hearing the stories of the victims” killed in the shootings at Young’s Asian Massage Parlor, Aromatherapy Spa and Gold Spa. “That’s really what we ought to be amplifying, their humanity,” he said.

Georgia law enforcement officials received widespread backlash Wednesday after conducting a news briefing in which they cited the suspect’s assertion that his crimes were not related to race. “It’s still early, but he does claim that it was not racially motivated,” said Captain Jay Baker of the Cherokee County Sheriff’s Office.

Baker told reporters the suspect suffered from “what he considers a sex addiction” and that he viewed the spas as a “temptation” that he “wanted to eliminate.” Further describing the suspect, Baker said: “Yesterday was a really bad day for him, and this is what he did.”

Critics denounced those remarks by Baker as wildly deferential to the alleged killer, failing to acknowledge the known facts of the case and discounting the well-documented rise in attacks on Asian Americans over the past several months that have coincided with the pandemic.

On Thursday, a group of Georgia’s Asian American and Pacific Islander legislators held a news conference in the state capitol building, where state Rep. Bee Nguyen condemned the framing of the shooting victims as “a problem that needed to be eliminated.”

“We’ve seen this with other high-profile mass shootings in the past, where the perpetrator is centered in attempts to justify the atrocity, and we see that victims are relegated as a symptom of the perpetrator’s sickness,” said Nguyen, whose district encompasses Atlanta.

“I will continue to reject that premise,” she said. “I will continue to call out the truth, which is [that] this was a violent and brutal act targeting three Asian businesses, resulting in the death of [six] Asian women — one that is laced with xenophobia, misogyny, gender-based violence and lax gun laws in the state of Georgia.”

At the federal level, congressional lawmakers on a House Judiciary subcommittee convened a hearing Thursday on discrimination and violence against Asian Americans. Rep. Steve Cohen (D-Tenn.), the panel’s chair, said the Atlanta-area shootings “felt like the inevitable culmination” of a year marked by acts of hate toward Asian Americans.

But the discussion quickly devolved into partisan politics, as ranking member Rep. Chip Roy (R-Texas) argued that victims of cartels at the southern border and rioters during last summer’s social unrest also “deserve justice” — seemingly suggesting they were similarly subjected to “race-based violence.”

“My concern about this hearing is that it seems to want to venture into the policing of rhetoric in a free society, free speech, and away from the rule of law and taking out bad guys,” Roy said. His remarks provoked an emotional response from Rep. Grace Meng (D-N.Y.).

“Your president and your party and your colleagues can talk about issues with any other country that you want,” Meng said. “But you don’t have to do it by putting a bullseye on the backs of Asian Americans across this country — on our grandparents, on our kids.”

The House hearing Thursday “was to address the hurt and pain of our community, and to find solutions,” she added. “And we will not let you take our voice away from us.”

Rep. Ted Lieu (D-Calif.) also rebuked Roy, urging him “to please stop using racist terms like ‘kung flu,’ ‘the Wuhan virus’ or other ethnic identifiers” in reference to the coronavirus.

“I am not a virus, and when you say things like that, it hurts the Asian American community,” Lieu said. “Whatever political points you think you are scoring … you are harming Americans who happen to be of Asian descent.”

The shooting suspect was charged Wednesday with four counts of murder and one count of aggravated assault in Cherokee County, part of the Atlanta metro area where one of the spas was located. Additional charges are expected to follow related to the two shootings that occurred within the city.

“Whatever the motivation was for this guy, we know that many of the victims, [the] majority of the victims were Asian,” Atlanta Mayor Keisha Lance Bottoms said at a news conference Wednesday. “We also know that this is an issue that is happening across the country. It is unacceptable. It is hateful. And it has to stop.”

Appearing Wednesday in the Oval Office, Biden said he had “been speaking about the brutality against Asian-Americans.” He characterized the trend as “troubling” and said he would “have more to say” about the Atlanta killings “when the investigation is completed.”

White House press secretary Jen Psaki argued at her briefing Wednesday that there was “no question” former President Donald Trump — who has repeatedly used offensive terms such as the “China virus” to refer to the pandemic — had contributed to “perceptions of the Asian-American community that are inaccurate, unfair [and] have elevated threats against Asian Americans.”