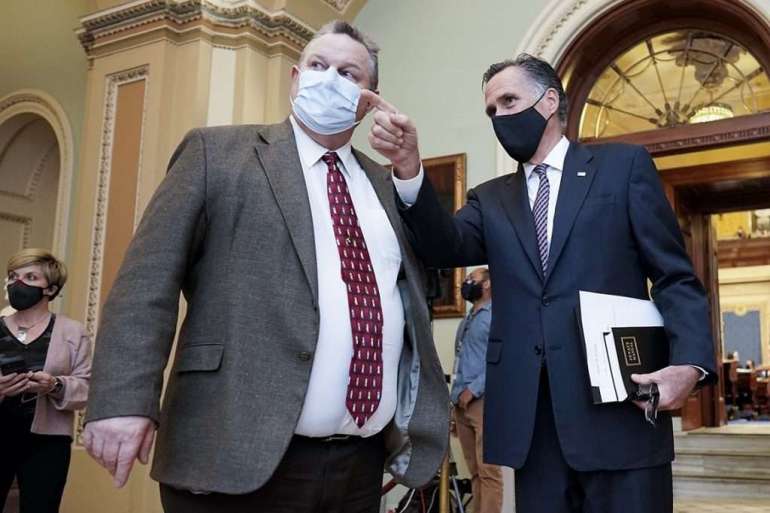 The bipartisan group met Wednesday afternoon for lunch and emerged from the meeting optimistic about the potential for cooperation, pledging to meet every two weeks. Divided equally between deal-seeking Republicans and Democrats, the bloc could become a critical power center in Senate Majority Leader Chuck Schumer’s 50-50 Senate.

After all, it’s no accident that 10 GOP senators are in the group: That’s the exact number that Schumer needs to break a filibuster. So the 117th Congress could amount to the ultimate test case for whether bipartisanship on big issues is still possible, with Democrats holding narrow majorities in both chambers and President Joe Biden fashioning himself as a bridge-builder with longstanding ties to the Senate.

While Biden’s nominees have all received some support from Republicans, Democrats used the so-called budget reconciliation process to pass their $1.9 trillion coronavirus relief package along party lines. But they can only take advantage of that filibuster protection one more time this year. And with no change in Senate rules for now, their only option to get anything else done is working with the GOP.

Sen. Jon Tester (D-Mont.) described the group as “pretty damn important” to preserving the legislative filibuster, adding that its discussions are “good for democracy” and “could be very good for the Senate.” Senators have discussed possible rules changes to bring bipartisan bills directly to the floor, their latest effort to shake the chamber’s stubborn gridlock.

“There’s some ideas that came out about doing some things if you have a supermajority vote on a bill in a committee, that it goes directly to the floor,” Tester said after the meeting. “Those are the kind of things that can really make a difference.”

The group includes Democrats like Sens. Kyrsten Sinema of Arizona, Joe Manchin of West Virginia, John Hickenlooper of Colorado, Jeanne Shaheen of New Hampshire, and Angus King of Maine, an independent who caucuses with the majority. All of them, including Tester, either oppose or have expressed reluctance about completely eliminating the 60-vote threshold required to move most legislation forward in the Senate.

More than half of the countries in the EU have paused AstraZeneca vaccinations amid panic that the shot could cause blood clots — despite lack of evidence.

“What the group wants to do is figure out how to get the Senate to work better in a bipartisan way,” Portman said. “We have done nothing this year except nominations, which [take] 50, and the Covid bill, which [took] 50.”

Shaheen added that senators are eager for the chamber to return to its days before partisan polarization took hold, when legislation and amendments could be brought to the floor: “Everyone I know in the Senate, Republican and Democrats, wants to get back to that place.”

But wrenching the Senate back to legislative life in a political environment that’s plumbing new, bitter lows won’t be easy. Some members of the group are privately doubtful that big breakthroughs are around the corner. They’re working against snowballing energy for retooling the filibuster as activists cite an ever-growing list of House-passed bills now stymied in the Senate — including legislation to enact police reform and expand voting rights, which many Democrats view as an existential issue to their party.

There are already signs that previously bipartisan policy ideas could soon hit a wall. Members of both parties say deals can be cut on issues like immigration, particularly given the current surge of migrants at the border, but no glimmers of topic-specific bipartisan alliances have emerged so far in the Senate.

And although both parties have long claimed infrastructure as a potential area of collaboration, some Democrats are already signaling they want to use reconciliation to muscle through a package along party lines.

Members of the G-20 insist they’re not specifically focused on preserving the filibuster. But there is precedent for a bipartisan group holding substantial sway when it comes to determining how the Senate functions. In 2005, the so-called “Gang of 14” brokered a compromise under which Democrats agreed not to filibuster judicial nominees and Republicans agreed they would not deploy the “nuclear option” to kill the 60-vote threshold.

Sixteen years later, the filibuster for nominees is long gone and only two senators from that defunct group remain in office: Sen. Lindsey Graham (R-S.C.) and Collins.

“It was very valuable for us to get together,” Collins said after Wednesday’s meeting. “And everyone’s very committed to working together on a host of issues. I could tell you that we solved all the world’s problems and that we straightened out Congress. But that would be an overstatement.”