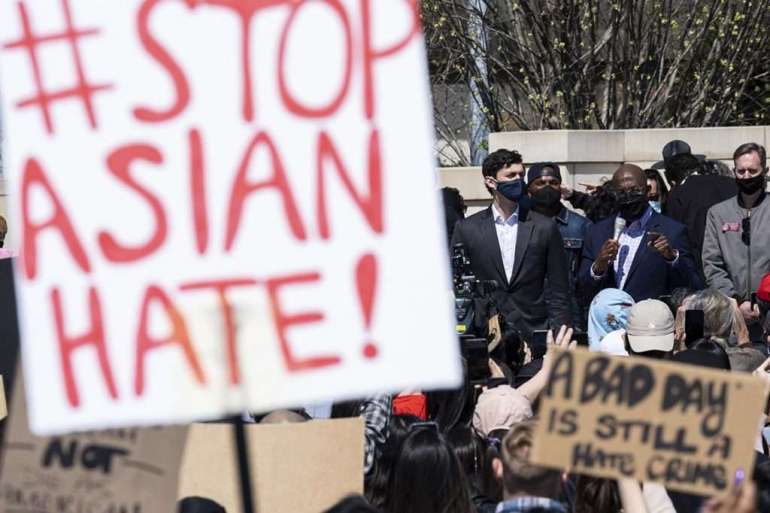 “Now I know the legal bar is high because they have to find somebody who heard him say that there was an anti-Asian slur expressed at the time. … But in my mind and in the minds of many, this is an anti-Asian hate crime,” she added.

Georgia Democratic Sen. Raphael Warnock said on NBC’s “Meet the Press”: “Look, law enforcement will go through the work that they need to do, but we all know hate when we see it. And it is tragic that we’ve been visited with this kind of violence yet again.”

Sen. Tammy Duckworth (D-Ill.) said she disagreed with the early statement from FBI Director Christopher Wray that the shootings didn’t appear to be racially motivated, adding that she asked Wray and Attorney General Merrick Garland for a deeper investigation into crimes that involve Asian Americans to see how many have been underreported.

“It looks racially motivated to me but I’m not a police officer. I’m not investigating the crimes,” she said on CBS’ “Face the Nation.”

Meanwhile, Homeland Security Secretary Alejandro Mayorkas said on ABC’s “This Week:” “We are very focused on the increase in hate crimes targeting the Asian American Pacific Islander community, and many other groups. … We are very focused on domestic violent extremism. It is the single greatest terrorism-related threat that we face in our homeland.”

Robert Aaron Long, a 21-year-old white man, is accused of killing four people inside two Atlanta spas and four others at a massage business in suburban Cherokee County. Investigators say they’re still working to establish a motive in the shootings. The suspect has claimed to have a sex addiction, according to authorities.

Thousands marched Saturday in cities coast-to-coast in protest at the rise of anti-Asian crimes and sentiment, including in Atlanta, New York, San Francisco and Pittsburgh. Georgia Sens. Warnock and Jon Ossoff marched in Atlanta alongside state Rep. Bee Nguyen, the first Vietnamese American to serve in the Georgia House.

“No matter how you want to spin it, the facts remain the same. This was an attack on the Asian community,” Nguyen said Saturday.

President Joe Biden on Friday condemned anti-Asian violence but did not go so far as to label the Atlanta-area attacks a hate crime.

“Whatever the motivation, we know this,” Biden said. “Too many Asian Americans have been walking up and down the streets and worrying, waking up each morning the past year feeling their safety and the safety of their loved ones are at stake. They’ve been attacked, blamed, scapegoated, harassed. They’ve been verbally assaulted, physically assaulted, killed.”

Vice President Kamala Harris on Friday urged Americans to speak out against discrimination “wherever and whenever it occurs.”

Biden also reiterated his call for Congress to “swiftly pass” the Covid-19 Hate Crimes Act, introduced by members of the Congressional Asian Pacific American Caucus, a call backed by Chu on Sunday, who said she has been “working for a year to try to get some action done,” including on another bill addressing the reporting of hate crimes. Warnock, in turn, called for “reasonable” action on gun control.

On CNN’s “State of the Union,” Arkansas Gov. Asa Hutchinson condemned some of his fellow Republicans’ rhetoric over the shootings and anti-China sentiment amid the coronavirus pandemic.

“It doesn’t help,” he said. “It doesn’t give us a sense of understanding of people, any time you lump them together as an enemy of our country. Words do matter.”