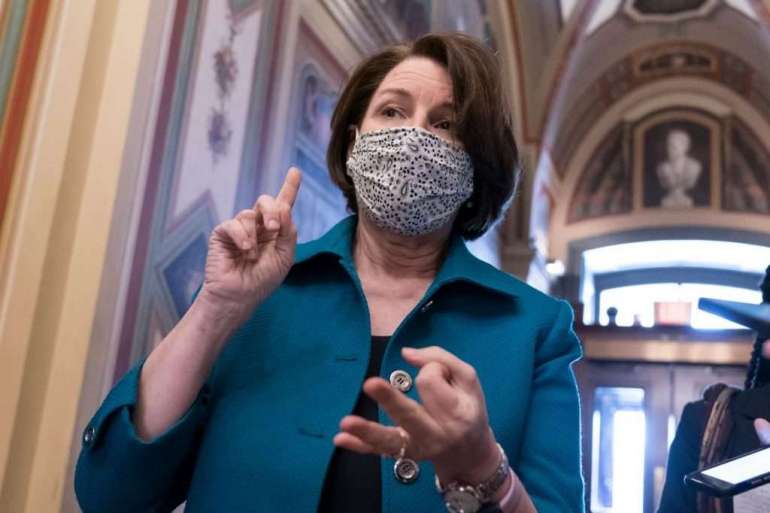 “This is just a fundamental disagreement … people believe that we should make it easier to vote,” Klobuchar said. “We continue to talk to them to figure out if there’s any common ground. But right now you are seeing a fundamental difference between the two parties on voting. Let’s not sugarcoat it.”

But the voting rights bill doesn’t face mere GOP opposition. Unlike immigration, infrastructure or even guns, no senators are even talking across the aisle about whether any compromise can be had. That dynamic, coupled with the Democratic clamor to use the voting legislation as a stage for a filibuster showdown, puts the already-gridlocked Senate on track for a new fissure over its own rules as well as the fabric of American elections.

“I don’t think there is common ground. And on the bigger issue of whether it’s better to federalize the national election process or let states and local officials do it like they have for over 200 years — there’s really not much compromise there,” Blunt said.

Asked about areas to negotiate on with Blunt and other Republicans, Klobuchar replied that the Democratic bill contains nine bipartisan provisions. Blunt’s retort: “So what? That means absolutely nothing.”

The gulf between them is painfully apparent ahead of the Rules panel’s scheduled Wednesday hearing on the House-passed voting measure. That sweeping bill establishes automatic voter registration, increases financial disclosure requirements for political spending and creates a public financing system for congressional elections.

Democrats argue that before the next round of congressional redistricting and the 2022 midterms, the existing legislation is their only chance to prevent GOP-controlled legislatures from establishing tougher voter ID laws that would restrict the voter rolls.

“Folks want to know where people like me fall on the filibuster. I think the bigger question is: Where do they fall on voting rights?” said Sen. Raphael Warnock (D-Ga.), who raised the matter with President Joe Biden Monday night. “The filibuster is a Senate rule. Voting rights goes to the foundation of who we say we are as American people.”

Yet even if Klobuchar had her way and Senate Democrats killed the filibuster to pass the voting bill, they’d still face serious problems. Democrats don’t yet have 50 votes in the Senate for the measure, because Sen. Joe Manchin (D-W.Va.) is noncommittal. He’s also against killing the 60-vote threshold for filibusters, putting the massive reform package at risk of failure.

Manchin said in an interview that he would like to see bipartisan talks on voting rights, adding that it made no sense to start negotiations on a bill that so plainly divides the two parties.

“There are a lot of things that I think are great in that bill. A lot of things,” Manchin said. “And we’re going to work on that.”

He might be the only person in the Senate who thinks an earnest negotiation is even possible. When you talk to senators about past bipartisan collaboration on voting issues, they’re likely to mention Sen. James Lankford (R-Okla.), who worked on election security during former President Donald Trump’s term.

But Lankford said the Democrats’ current proposal is “not a serious attempt to deal with election security and providing an opportunity for every person to vote. It really is the vehicle to try and break the filibuster.”

“They’re just saying, ‘Racist Republicans are trying to suppress the vote, so we’ve got to do this 800-page bill,’” said Lankford, who recalled past productive talks with Klobuchar about election integrity. Democrats are contending that “if we don’t break the filibuster, then we’re going to lose democracy,” he said.

In the aftermath of two mass shootings in less than a week, Joe Biden is is hoping to avoid a repeat of his failed 2012 gun reforms — and activists are wondering why he isn’t doing more.

In fact, that’s not far off from the Democratic message. Sen. Elizabeth Warren (D-Mass.) put it simply: “There are some voting reforms that Republicans may accept, but attacking voter suppression head-on is not on their agenda.”

And House Democrats don’t dance around their desire to push the voting rights bill past the filibuster.

“I’m all for bipartisanship, and certainly the filibuster … can be viewed as a mechanism that fosters, encourages, mandates bipartisanship,” said Rep. Anthony Brown (D-Md.). “But when there’s a tool that was designed primarily during the Jim Crow era to prevent a lot of anti-discrimination and civil rights legislation, I think it deserves a second look.”

The political paralysis plaguing Democrats’ voting rights proposal comes as new questions emerge about its practicality ahead of Senate consideration. Some election administrators and experts have quietly expressed concern about some of the voting system provisions in the bill, even while supporting the ethos and goal of the overall legislation.

“The devil is in the details,” one Democratic state-level secretary of state said. “Those of us that are in support of the principle of [the broader bill], we want to work closely with Congress to make sure that states that have very accessible election systems in place, that those are protected, that those aren’t unintentionally altered.”

Aides working on the voting rights bill said that election administrators’ concerns will be addressed later on in the process. But that only works if the bill goes through a process.

Currently it appears that Senate Majority Leader Chuck Schumer will bring up the legislation later this year only to face a wall of GOP opposition. As written, the voting rights package seems unlikely to get a single Republican supporter and will stall on the Senate floor as soon it comes up.

Sen. Susan Collins (R-Maine) said “there’s an understandable hesitancy on the part of Republicans” about a bill that “would essentially federalize decisions that were made at the state level.” Blunt said some of his GOP colleagues had floated the idea of a Republican alternative to the bill Democrats have dubbed the “For the People Act.” However, Blunt doesn’t support that approach, citing the history of states running their own elections.

And despite her reputation for bipartisan compromise, Klobuchar doesn’t feel like giving any ground at the moment either.

“We are happy to work with them on things. But they have been drawing a line in the sand that they don’t want to see any changes where there’s clear voter suppression efforts, as acknowledged by the courts,” she said. “The people are on our side. Including a bunch of Republican voters that don’t want to have the right to vote by mail taken away from them.”

Zach Montellaro and Sarah Ferris contributed to this report.