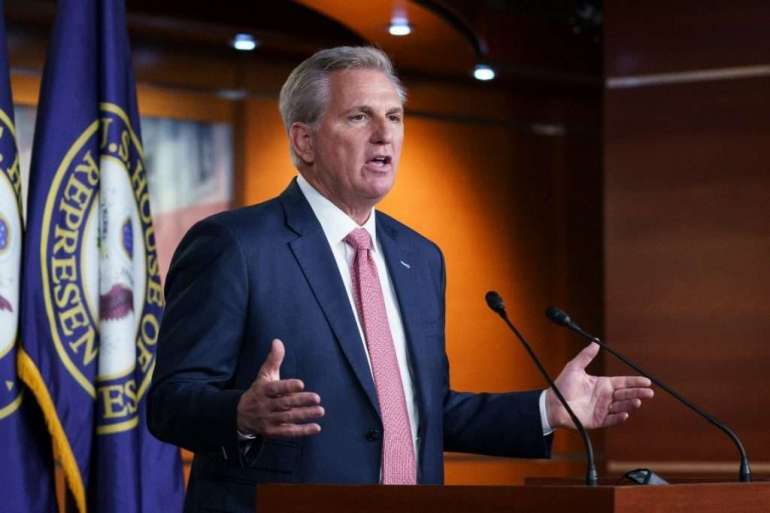 McCarthy also accused Pelosi of trying to “manipulate” the outcome — and pad her razor-thin majority — by requiring Miller-Meeks to “prove that she won her seat, despite holding a valid election certificate.” Democrats, however, counter that they will carefully review Hart’s challenge and that both sides need to meet a burden of proof.

Hart lost by just six votes to Miller-Meeks in November, but Hart says 22 ballots were improperly rejected and if counted would make her the victor. Now, the race is up for review by the House Administration Committee, an unusual — but not unprecedented — process that could result in on-the-ground-investigations and a potential recount. Both sides are slated to file written briefs in the case on Monday, but there is no set timeline or process and the committee has wide latitude in how it moves forward.

Democrats emphasize that Hart is going through a constitutional process, which they say is a contrast from former President Donald Trump and his allies, who tried to overturn the presidential election on the floors of Congress. And last week, Pelosi defended the House panel’s review of the race, arguing it’s their duty to scrutinize any tight election and that the same process has been used by dozens of Democrats and Republicans over decades.

But some moderate Democrats are still anxious about the potential optics of tossing out a state-certified victory after they just hammered Republicans for challenging President Joe Biden’s win. If the House Administration Committee decides to move forward with the case, the challenge would come up for a vote on the House floor — a scenario that vulnerable Democrats are desperate to avoid.

And top Republicans have started calling more attention to the race in recent weeks, hoping to turn the issue into a major political liability for Democrats. McCarthy will visit Miller-Meeks’ district in Iowa on Wednesday, where “they will hear from constituents of Rep. Miller-Meeks who are concerned with Speaker Pelosi’s efforts to disenfranchise their votes,” according to an advisory from McCarthy’s office.

Across the Capitol, Senate Minority Leader Mitch McConnell signed on to a letter with several other senators urging businesses and trade associations to hold Democrats accountable if they support overturning the Iowa race — the same way Republicans were punished for challenging Biden’s victory.

And the House GOP’s campaign arm has been blasting out near-daily emails targeting vulnerable Democrats over where they stand on the race. The National Republican Congressional Committee took it a step further this week, cutting a new ad linking Rep. Cindy Axne (D-Iowa), who represents a key swing seat, to the contentious issue.

“Cindy Axne and Nancy Pelosi are working to steal an election here in Iowa,” the ad says. “A Pelosi power play, backed by Axne, to overturn the will of Iowa’s voters. So call Cindy Axne. Tell her thou shall not steal our trust.”