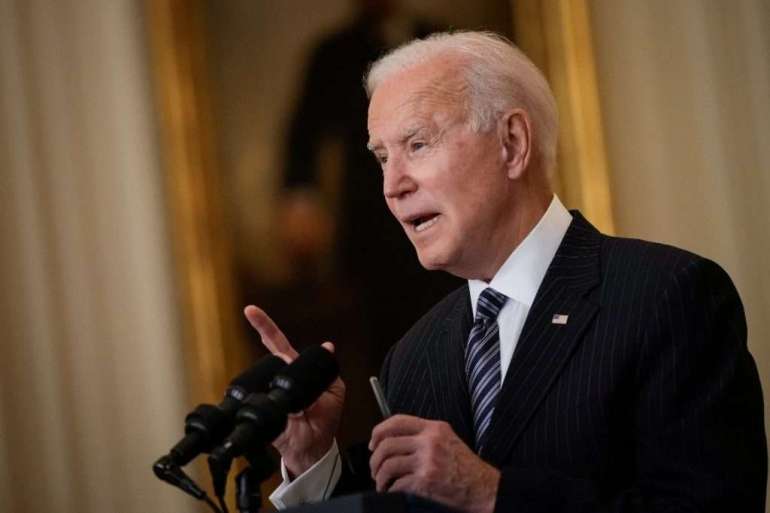 Ben Beachy, director of the Sierra Club’s Living Economy program, told POLITICO that “there is a lot to like in this proposal. Much of it really is transformative.” But still, he added: “Congress needs to up the ante on scale to deliver a plan that’s as big as the crises that we face. Today’s proposal is a good start and we need to go bigger.”

Rep. Alexandria Ocasio-Cortez, the Democratic lawmaker who has called for aggressive climate action, weighed in Tuesday evening, tweeting that the overall package “is not nearly enough. The important context here is that it’s $2.25T spread out over 10 years. For context, the COVID package was $1.9T for this year *alone,* with some provisions lasting 2 years. Needs to be way bigger.”

This is not nearly enough. The important context here is that it’s $2.25T spread out over 10 years.

For context, the COVID package was $1.9T for this year *alone,* with some provisions lasting 2 years.

Needs to be way bigger. https://t.co/eTQ7cxuTzF

Others are more optimistic, including Biden’s environmental allies, whose pressure during last year’s presidential campaign prompted the then-Democratic nominee to ramp up the ambition of his climate goals. For them, after four years of federal inaction under former President Donald Trump, the proposed spending represents a sea change that could push the world’s largest economy headlong into revamping its manufacturing, industry and infrastructure with climate in mind.

“Today is a great day. … Clearly all we needed was a new president to have infrastructure,” said Tiernan Sittenfeld, senior vice president of government affairs with the League of Conservation Voters, alluding to the long-running “Infrastructure week” meme that mocked the Trump administration’s failure to live up to its pledges to rebuild the nation’s road, bridges and airports.

“[It’s] a good plan. Is it enough? Nope. It’s a start, and now the game turns to Congress,” tweeted Sam Ricketts, former staffer for Washington Gov. Jay Inslee and the co-founder of Evergreen Action.

Climate activists are expecting even more commitments from Biden in April in what many inside and outside the administration have taken to calling “Earth Month,” when the White House will host a virtual climate summit with dozens of world leaders and announce its new national pledge for cutting U.S. carbon output under the Paris Climate Agreement.

For now, many environmental advocates have turned their attention to what’s likely to be the biggest hurdle for Biden’s plan: Congress, which will have to approve a corporate tax hike to help pay for the $2 trillion in spending with only the narrowest of Democratic majorities.

The plan released Wednesday doesn’t contain many surprises, as much of it was featured in Biden’s campaign platform. To pass it though, Democrats will have to decide whether to use the budget reconciliation process, which would allow them to approve the plan without a single Republican vote.

The White House did not indicate a preferred path for congressional Democrats, and a senior administration official told reporters late Tuesday that the administration has begun outreach to lawmakers in both parties.

“It’s an important initiative to start the process with the president being very clear that he’s got a plan, and that he is open to hearing what others think,” the official said. “But what he is uncompromising about is the urgency of the moment and the need to really deliver for the American people.”

How congressional efforts match up with Biden’s forthcoming pledge to cut U.S. emissions by 2030, which the White House has said will emerge before an April 22 climate summit with world leaders, is essential for achieving the vision the president outlined, said Christy Goldfuss, a former Obama administration official who is now senior vice president of energy and environment policy at the Center for American Progress.

“This is the climate moment and I don’t know how many leaders across D.C. really have absorbed that,” she said.

Some activists suggested Biden also doesn’t understand that, accusing his administration of failing to propose a blueprint that would satisfy his promise to zero out carbon emissions from the power grid by 2035 and across the economy by 2050, a claim made by groups such as Food & Water Watch and the Center for Biological Diversity.

Much of that criticism revolves around activists’ complaints that the plan’s spending proposals are too modest to achieve meaningful carbon reductions and include technologies that would undermine efforts to curb fossil fuels. Many green groups oppose one of those technologies — carbon capture and sequestration — as a lifeline for the coal, oil and natural gas companies that have long used political influence to impede climate policy. But Biden has backed the nascent technology to help win over unions and fossil fuel-state lawmakers who worry about the economic consequences of a shift to clean energy.

“President Biden’s industry-friendly infrastructure plan squanders one of our last, best chances to stop the climate emergency,” Brett Hartl, government affairs director at the Center for Biological Diversity, said in a statement. “Instead of a Marshall Plan approach that moves our economy to renewable energy, it includes gimmicky subsidies for carbon capture, fantastically wishes the free market will save us, and fails to take crucial and ambitious steps toward phasing out fossil fuels.”

But Collin O’Mara, CEO of the National Wildlife Federation, said Biden’s plan is best understood as the opening position of a months-long negotiation. O’Mara, whose organization joined other groups in pushing for $1 trillion in spending every year for the next 10 years, said he thought the price tag would grow as the legislation moves through the House and the Senate.

Spending would have to increase to accomplish some of the sweeping infrastructure changes Biden floated, particularly to boost the nation’s health. Biden’s call to replace all lead service lines in drinking water systems would probably take at least $60 billion, greater than the $45 billion the administration penciled in for the initiative, Tommy Holmes, legislative director of the American Water Works Association, said in an email.

That said, if the proposal is truly a start, it’s a good one, said Erik Olson, who leads the public health program at the Natural Resources Defense Council. He said in an email that the plan would take “several big steps forward” to clean contaminated drinking water for tens of millions of people, which would greatly benefit children who face lead exposure.

“Honestly, it’s about time that we started to invest in our aging and decrepit drinking water and clean water infrastructure to protect our health and create thousands of living wage jobs,” he said in an email.

Annie Snider contributed to this report.