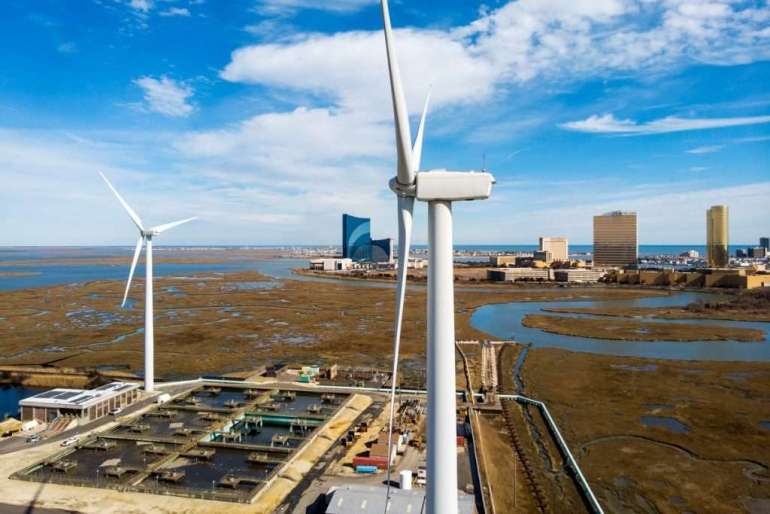 In New Jersey, the state is pushing the development of the country’s first port dedicated to the offshore wind industry along the Delaware River. Smaller states like Connecticut are also piling on, investing in port infrastructure to serve the industry in Bridgeport and New London. The state has signed contracts to buy roughly 1,000 megawatts of offshore wind power, enough to meet about 20 percent of the state’s energy supply.

“Our efforts to decarbonize our economy are creating one of the largest opportunities of the generation,” said Katie Dykes, the commissioner of the Connecticut Department of Energy and Environmental Protection.

An analysis for New York’s independent grid operator estimated the state needed 21 gigawatts of offshore wind by 2040 to meet its climate goals. That amounts to more than half the power plant capacity installed in New York today. A recent Massachusetts study estimated achieving net-zero emissions would require 15 gigawatts, while a New Jersey consultant pegged the Garden State’s offshore wind needs at 11 gigawatts.

The massive build-out has created concerns about where to place all the turbines. State and federal officials say there is currently not enough ocean leased to support the build-out called for in state plans.

Doreen Harris, who leads the New York State Energy Research and Development Authority, estimates there is a gap of 6,000 megawatts between the available lease areas and the goals of New York, New Jersey and neighboring states. She said the federal government’s approach to future leases in the New York Bight, the area of shallow waters between Long Island and New Jersey, will be particularly important. Without new lease areas, the states’ ability to achieve their wind development goals remain constrained.

The Biden administration committed Monday to leasing a new area of the New York Bight, saying it intended to announce a new lease sale by the end of 2021 or early 2022. Overseeing that process is Amanda Lefton, a former New York environmental policy official whom Biden tapped to lead the Bureau of Ocean Energy Management, or BOEM.

“Success at BOEM is going to mean that we created a more certain process that allows for transparency and efficiencies for reviewing offshore wind projects,” Lefton said in an interview.

The prospect of leasing large amounts of ocean for wind development has drawn fierce opposition from fishing groups. Earlier this month, lobstermen in Maine encircled a survey vessel working off the state’s coast, according to local news reports.

David Frulla, a Washington-based attorney who represents the Atlantic scallop fishery industry, warned it could end up as “collateral damage” in the administration’s push for more development.