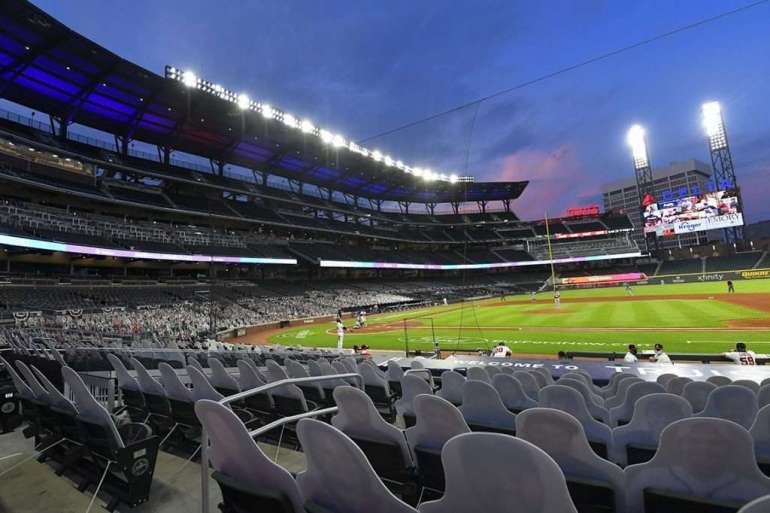 The Braves said in a statement Friday that the organization is “deeply disappointed” in MLB’s move, saying businesses, employees and fans are “victims” of the change.

“This was neither our decision, nor our recommendation, and we are saddened that fans will not be able to see this event in our city,” the team wrote in the statement. “The Braves organization will continue to stress the importance of equal voting opportunities and we had hoped our city could use this event as a platform to enhance the discussion.”

Georgia Gov. Brian Kemp lashed out at MLB for the decision in a statement, calling the decision “cancel culture.”

“Today, Major League Baseball caved to fear, political opportunism, and liberal lies,” Kemp said in the statement. “This attack on our state is the direct result of repeated lies from Joe Biden and Stacey Abrams.”

MLB is also moving its draft, scheduled for July, out of Atlanta, Manfred said in the statement.

The move comes after President Joe Biden backed moving the game out of Atlanta over the new voting law, which adds a new ID requirement for voters wanting to cast their ballot absentee, shortens the runoff length and in effect hands the election board to the Legislature, among other things. The new law, passed by a Republican-controlled state legislature, came after two Democrats won Senate runoff races that gave Democrats control of the chamber.

Moving an All-Star Game over legislation is not completely unprecedented, with the NBA pulling its 2017 All-Star Game from Charlotte in 2016 after North Carolina passed a law barring anti-discrimination protections for LGBTQ people. Previously, some officials and advocates had also called for MLB to move its 2011 All-Star Game from Arizona over a strict new immigration law, but the game ultimately went forward in Phoenix.

Biden had called the new Georgia law “Jim Crow on steroids” in calling for the game to be moved. Kemp, a Republican, called Biden’s push to move the All-Star Game “ridiculous.”

MLB’s move also came after pushback from a large group of voices, some of which have called for the Masters golf tournament to move from Augusta, Ga., and for boycotts of Georgia-based companies which hadn’t come out against the new law.

Kemp has gotten pushback over the new law he signed from major Atlanta-based companies, including Delta Airlines and Coca-Cola. On Thursday, he said in a Fox News interview that he wouldn’t give into pressure, saying companies won’t back down because of pressure from activists.

“There is nothing I can do about that,” Kemp said. “But I’m also not running a public corporation. They’ll have to answer to their shareholders. There is a lot of people that work for them and have done business with them that are very upset.”

The blowback to MLB’s change of plans wasn’t limited to the Braves, or even Republicans. Former Georgia Democratic gubernatorial candidate Stacey Abrams also said she was “disappointed” in the move.

“Disappointed @MLB will move the All-Star Game, but proud of their stance on voting rights,” Abrams wrote in a tweet. “GA GOP traded economic opportunity for suppression. On behalf of PoC targeted by #SB202 to lose votes + now wages, I urge events & productions to come & speak out or stay & fight.”

On the other side of the aisle, Rep. Jeff Duncan (R-S.C.) said in a tweet that he had told his staff to draft legislation that would take away MLB’s antitrust exception.

“Any organization that abuses its power to oppose secure elections deserves increased scrutiny under the law,” Duncan wrote. Republicans in and outside of Georgia have backed the law or similar legislation, citing “election integrity” concerns despite no evidence of widespread voter fraud.

California Gov. Gavin Newsom, a Democrat, suggested MLB should move the game to California, which is home to several MLB franchises.

“In California we actually work to expand voter access — not prevent it,” Newsom wrote in a tweet Friday afternoon.