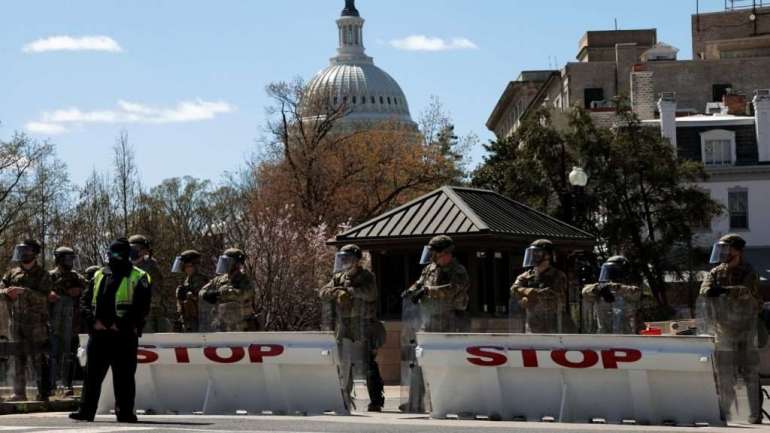 Evans’ death rocked a force already reeling since the Jan. 6 mob attack on the Capitol that left another officer, Brian Sicknick, dead. Two officers who responded to that assault later died by suicide, in what their families have said was a direct result of the impact of the Jan. 6 attack.

“It has been an extremely difficult and challenging year for us, but we will get through this,” Pittman said.

The suspect was not known to Capitol Police or the D.C. Metropolitan Police, officials said. Robert Contee, the acting D.C. police chief, said the incident “does not appear to be terrorism-related” and that there was no indication of a “nexus to a member of Congress.” The suspect’s motive was unknown.

Capitol Police issued an all-clear just after 3:00 p.m., lifting the lockdown for those inside the various Capitol buildings.

President Joe Biden, who is spending the weekend at Camp David, was briefed on the incident, the White House said. In a statement expressing condolences from him and first lady Jill Biden, President Biden said he would lower flags at the White House to half-staff.

“We know what a difficult time this has been for the Capitol, everyone who works there, and those who protect it,” he said.

Speaker Nancy Pelosi ordered all flags at the Capitol to be flown at half-staff on Friday in honor of Evans, the fallen officer and in a statement, she called Evans “a martyr for our democracy.”

“Today, once again, these heroes risked their lives to protect our Capitol and our country, with the same extraordinary selflessness and spirit of service seen on January 6,” Pelosi said. “On behalf of the entire House, we are profoundly grateful.”

Senate Minority Leader Mitch McConnell (R-Ky.) said Evans would “go down in history for his selfless sacrifice” and said the Senate would pray for the second injured officer.

Rep. Tim Ryan (D-Ohio), who chairs the House Appropriations subcommittee overseeing funding for the Capitol Police, told reporters it had been a “very traumatic time” for the Capitol Police force after the Jan. 6 riot, a force already “stretched” by the response to Covid-19 and working overtime to protect the Capitol.

“They’re going to continue to be resilient, but they’ve been through a lot and it’s just heartbreaking for the news they all got today,” he said.

The House and Senate are currently on recess, but some lawmakers, staff, and reporters were working on Capitol Hill. A notice sent to lawmakers and staff shortly after 1:00 pm warned them to stay away from “exterior windows and doors” and for those outside to “seek cover.”

Multiple law enforcement agencies responded to the scene, and the FBI’s Washington Field Office said it was providing support to the Capitol Police. A quick response force — the contingent of troops deputized in the aftermath of the Jan. 6 attack — was activated shortly before 1:30 p.m., according to a person familiar with the matter. A Pentagon official confirmed the deployment.

The complex was locked down in the aftermath of the Jan. 6 riot, and a National Guard contingent of around 2,300 troops was still stationed in the area as of Friday. National Guardsmen ran to barricades around the Capitol on Friday, many carrying riot shields that had been stocked at the complex since the riot. The Capitol Police closed several blocks around the building as law enforcement responded to the scene.

As of two weeks ago, the exact spot where the incident occurred was blocked off from the public. For more than two months, 10-foot fencing surrounding the entire Capitol complex, preventing unauthorized individuals from gaining access. A debate had been raging on Capitol Hill over whether to remove the fencing or maintain some sort of perimeter indefinitely.

The department has been under intense scrutiny following the failures that led to the Jan. 6 breach. The House and Senate are both undertaking intensive security reviews and making proposals that could reshape the Capitol Police force dramatically.