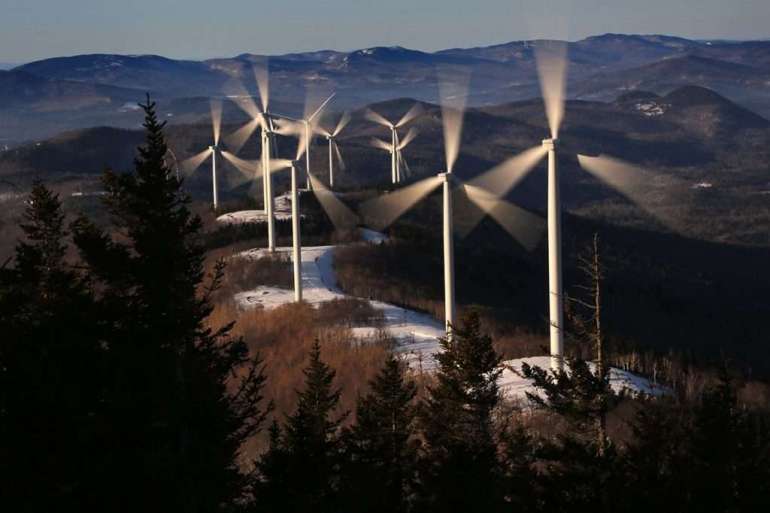 “The jobs that he talked about yesterday were construction jobs,” said Phil Smith, a spokesman for the United Mine Workers of America, a day after the Biden speech. “We’re not seeing anything concrete that our members can look at and say, ‘OK, that’s where I’m gonna fit in.'”

The complaints underscore the difficulty Biden will have in pursuing his two most ambitious goals: reviving the labor market by generating millions of jobs for unions — which traditionally thrive in old-line industries — and transforming the U.S. into a clean economy where electric vehicles and battery storage replace coal, natural gas and oil as energy sources.

Environmentalists defend the plan as a necessary move away from old technologies to battle climate change. And others say Biden’s plan does include tax incentives for manufacturing and a vision for developing a supply chain that could provide the kind of blue-collar, high-skill jobs that used to be in power plants.

“My American Jobs Plan will put hundreds of thousands of people to work … paying the same exact rate that a union man or woman would get,” Biden said from a union hall in Pittsburgh on Wednesday when announcing his proposal. “It also works to level the playing field, empower workers and ensure that the new jobs are good jobs that you can raise a family on, and ensure free and fair choice to organize and bargain collectively.”

While unions are strongly supportive of the administration’s pro-labor stance, they worry that the end-goal — if not executed properly — could have devastating effects on their members.

“From our perspective, if the jobs aren’t there when the mine closes, this plan fails,” Smith said. “There’s a very large disconnect between what the aspirations are here and what’s going to end up actually happening on the ground.”

Biden fought to bring white, blue-collar workers back into the Democratic fold after the party lost them to Donald Trump in the 2016 presidential race, and the administration is seeking to prove that this can be both the most pro-labor and anti-carbon presidency in history. But the reality may prove troublesome. Once the build-out of no-carbon power sources is complete, the steady jobs in power plants will have largely vanished.

“Right now, if you’re looking at traditional renewables, you know, it hasn’t historically been a hopeful place for American workers to go into these sectors of the economy to work, to have family-sustaining jobs,” said Roxanne Brown, international vice president for the United Steelworkers. “That has not been the American story — yet.”

Some labor economists say that because of the long-term nature of Biden’s plan — investments are to be spread out over eight years — the interruption won’t be as abrupt.

“If we do a serious level of transformation needed to really decarbonize the economy, that’s not something that gets done in five years, that’s a decades long thing, and so we’re going to be building new things all the time,” said Josh Bivens, director of research at the left-leaning Economic Policy Institute.

Bivens said the more pressing concern should be the quality of jobs created as a result of the infrastructure push.

“Basically the fossil fuel sector has historically been pretty unionized; it’s been a place that has provided quite good jobs, especially for the types of workers in it,” he said.

Biden’s infrastructure proposal tries to address these worries by creating incentives to bring manufacturing to the U.S. Offshore wind components come to the U.S. from Europe, and most of the battery and solar panel supply chains are in China and Southeast Asia. The president hopes to persuade companies to build new factories through a series of tax incentives, particularly an expanded manufacturing credit initiated by Sens. Debbie Stabenow (D-Mich.) and Joe Manchin (D-W.Va.) that would encourage companies to build on the site of shuttered coal mines and coal plants.

The administration is aiming to keep union support by tying labor standards to these and other clean energy tax credits, and by offering full-throated support for the Protecting the Right to Organize Act, which would smooth the path for workers trying to unionize. Officials say labor will be part of an ongoing conversation about policy.

“The labor movement has been and will continue to be a partner when it comes to the policy initiatives prioritized by the administration,” said an administration official. “The policy and goals are crafted in partnership and in conjunction with a variety of stakeholders, including labor. There is continuous engagement about the impacts of these proposals. And the jobs plan’s ability to create good paying union jobs across the board has been very key.”

And some unions do back the plan, particularly those poised to build out the no-carbon grid.

“The American Jobs Plan would make good on Joe Biden’s promise to the American union worker,” Lonnie Stephenson, international president of the International Brotherhood of Electrical Workers, said in a statement.

But some of Biden’s most pro-labor policies are vehemently opposed by the business lobby and Republicans — who say they are restrictive to workers’ free choice and harmful to companies — and are likely to spur a contentious fight in Congress.

Already Republicans are slamming the proposal as a new Green New Deal, and trying to move the administration toward a narrower, bipartisan bill.

“President Biden’s so-called ‘jobs’ proposal is a clear attempt to transform the economy by advancing progressive priorities in an unprecedented way. The proposal would aggressively drive down the use of traditional energy resources and eliminate good-paying jobs in West Virginia and across the country,” Sen. Shelley Moore Capito (R-W. Va.), the top Republican on the Environment and Public Works Committee, said in a statement. “I stand ready to be a partner in advancing infrastructure legislation in a bipartisan way—just as we have in the past.”

Environmentalists say that looking beyond the coming boom is getting ahead of the problem. There are still millions more unemployed Americans than before the pandemic struck, and the short-term spending built into the package is intended to get the economy rolling again. But even in the long term, the package aims to spur an overhaul of the economy, including providing incentives to construct offshore wind and battery supply chains in the U.S.

“The main technology story of the 21st century is the enormous shift that the global economy is undergoing to decarbonize, and driving the innovations on the new technology that will get us there,” said Nat Keohane, senior vice president at the Environmental Defense Fund. “The economy is not made up of a fixed number of sectors. The economy is incredibly dynamic and the economy of 2030, 2040, 2050 will look very different. And so the question is, are we positioning the U.S. economy to compete, or not?”