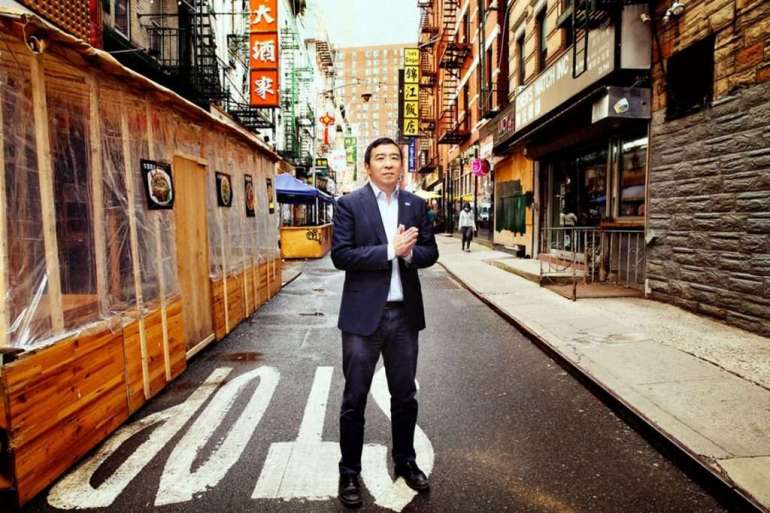 So what was it like, I asked, when he took off the scarf and put on a plain mask, and looked like just another Asian dude?

“I’ve been on the streets in New York and on the subways any number of times when I didn’t have a ‘Yang For New York’ mask on and the rest of it,” he said after a pause. “And the first time someone shrinks away from you on the subway, or looks at you a little bit too long, you think, ‘well, maybe that was in my head.’ But then if it happens repeatedly, then you start thinking, ‘this is not in my head.’ And you can sense a degree of both visibility and hostility or awareness of your presence, but not in a welcome way. It’s like: ‘I’m aware of your presence and I’m not thrilled about it.’ And that’s a very different feeling, and a very different energy.”

But on that sunny street in Chinatown, everyone knew that the guy wearing a “Yang for New York” mask and being followed by a professional photographer was the Andrew Yang: the Universal Basic Income guy, the former presidential candidate, the could-be mayor — a guy who also happened to be the most prominent Asian American political figure in the country. It was as if Yang had willed his own post-racial celebrity into existence, simply by believing in himself as hard as he could.

“I frankly have been accustomed to being able to blend into the woodwork for most of my life. Because I think that’s something of an Asian American superpower, where, like, prior to the last 14 months, you could become quite inconspicuous,” he said. “When I’m very obviously Andrew Yang — the scarf, the mask — then I get a lot of love and warmth and support. But if I’m not as readily identifiable, then there is a different energy.”

“When whites defined Negroes as inherently less intelligent, for example, and therefore furnished them with inferior schools, the products of these schools often validated the original stereotype,” Peterson wrote. “Once the cumulative degradation has gone far enough, it is notoriously difficult to reverse the trend.”

And yet, he marveled, Japanese Americans had done so, less than 20 years after the internment camps of World War II. “By any criterion of good citizenship, the Japanese Americans are better than any other group in our society, including native-born whites. They have established this remarkable record, moreover, by their own almost totally unaided effort. Every attempt to hamper their progress resulted only in enhancing their determination to succeed.”

With that backhanded praise, Japanese Americans, and the millions of other Asians who followed them as America’s immigration laws changed, were squeezed into a box nearly impossible to break out of: How could they prove that they face discrimination if everyone thought they were the embodiment of the “Horatio Alger hero,” as Peterson put it? How could they find allies to achieve equality — cultural, political, societal — if everyone thought they were successful by some sort of ethnic disposition? And if they weren’t successful, well, weren’t they just bad at being Asian?

There are endless books, essays, films and shows that try to shatter that idea. But there are also plenty of Asian Americans who meet every criteria of this myth, and even more Asian parents who push their kids to embody it. Andrew Yang grew up as one of these kids.

With two parents with Berkeley postgrad degrees, an upbringing in the quaint upstate New York town of Somers, and an education from Phillips Exeter, Brown University, and Columbia Law — a pedigree that Mayflower descendants would stab each other to obtain — Yang occupies an elite demographic slot, as Pulitzer Prize-winning author Viet Thanh Nguyen (no relation), who has interviewed Yang, told me: “Ivy League, East Coast, model minority Asian American, whether he calls himself that or not.”

“I feel some sympathy for him, because he’s caught up in a dynamic of race that he doesn’t want to be caught up in and no one should have to be caught up in,” Nguyen said. “But that’s just the nature of race in the country. If [he] can be a good politician, he has to figure out a response to that. Not because he may care, but because other people care.”

I had wondered if, in his journey to get ahead in America, Yang had distanced himself from the AAPI community or any characteristic of being a Taiwanese immigrant kid, especially after talking to Peter Kiang, the director of Asian American studies at the University of Massachusetts Boston.

Back in the ’80s, Kiang told me, he had worked as a consultant for New England prep schools, including Exeter — the alma mater of billionaires, diplomats, and the Anglo-Saxon power elite — on how to diversify their campuses to be more inclusive to Asian Americans, particularly the children of immigrants, after a string of stories exposing racism on these schools’ cloistered campuses.

“They were confronting this new population and had no idea how to approach it,” he recalled, noting that the schools would either try to integrate them into the student body — incorporating Asian American studies into the curriculum, for instance — or simply stack the incoming class with just enough Asians, leaving this new class to fend for themselves and assuming that they were model minorities who could boost their Ivy League acceptance rates.

Kiang remembered one focus group he conducted with a group of Asian American students at one of these schools, in which he asked them if they had complaints. After prodding, they admitted they weren’t a fan of the quality of rice — but felt like they couldn’t say anything about it, and instead kept rice cookers in their dorm rooms.

“They didn’t know whether, if they made complaints or protests, they’d be kicked out of school and their parents’ dreams would evaporate,” Kiang recalled. They had no language, he said, to call out white people.