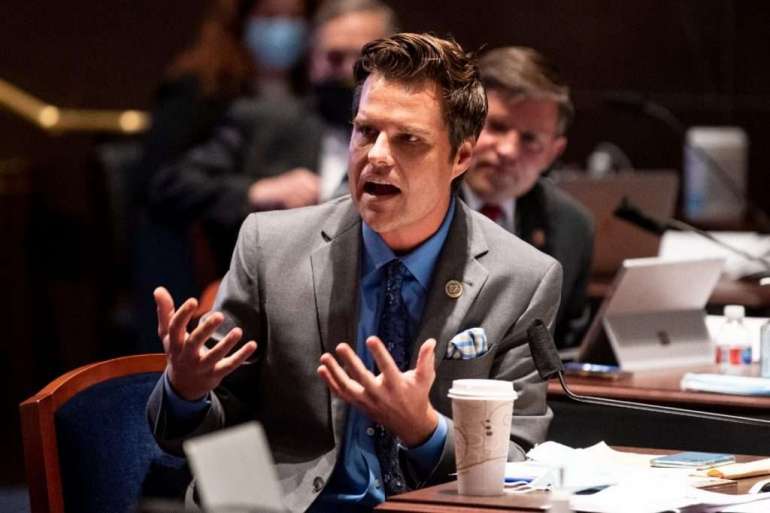 In the days since news broke that the Department of Justice was looking into whether Gaetz had violated sex trafficking laws — an allegation he denies — no Trump aide or family member has tweeted about the Florida congressman. Nor have almost any of the most prominent Trump surrogates or Trump-allied conservatives and media personalities, including Sean Hannity, Dan Bongino, Charlie Kirk or American Conservative Union Chair Matt Schlapp, at whose annual CPAC conference Gaetz had recently appeared.

The Daily Beast reported on Friday night that Trump himself was monitoring the situation but following the advice of aides to stay quiet about it. And several people familiar with their relationship said Gaetz and Trump have not spoken regularly lately, even after the lawmaker had offered to resign from Congress to join the ex-president’s impeachment defense team in February.

Operatives inside Trump World say the silence is owed to a variety of factors. Among them is the fact that Gaetz has always been regarded as a grenade whose pin had already been pulled. The congressman had a reputation for a wild personal lifestyle that, associates say, occasionally bordered on reckless. Some of Gaetz’s own aides would regularly send embarrassing videos of their boss to other GOP operatives, according to two people familiar with the videos.

“Anyone that has ever spent 10 minutes with the guy would realize he’s an unserious person,” said one former Trump campaign aide.

Neither Gaetz nor his office returned a request for comment.

As Gaetz has defended himself from the charges — with a TV appearance that left Fox News host Tucker Carlson stunned, and statements that denied the underlying charge but conceded that he was “generous as a partner” — that perception has only grown firmer.

“The reason you haven’t seen people in MAGA world defending Gaetz is less about him being unpopular, which he is in a lot of circles, and more about the fact that he hasn’t done a single thing to make people comfortable to defend him. His interview with Tucker was an absolutely embarrassing train wreck,” said one Trump confidant.

Gaetz does have friendly ties to some of the former president’s biggest media champions and Mar-a-Lago members. The Florida congressman proposed to his fiancée, Ginger Luckey, during a New Year’s Eve celebration at the Palm Beach club last December that included a lengthy guest list of MAGA celebrities and GOP donors.

But the congressman does not enjoy particularly strong relationships among the core Trump crew. Some Trump confidants regarded him as a leaker during Trump’s presidency who was as eager to use his association with the 45th president to lift his own career as he was to help Trump’s.

His self-promotion produced eye-rolls at times, including how he managed to get positioned as a protagonist in an HBO documentary on D.C. during the Trump era. And he irritated others by constantly attacking his own colleagues inside the House GOP conference. In late January, for instance, Gaetz organized a rally outside the Wyoming State Capitol where he encouraged voters to dump Rep. Liz Cheney, one of 10 House Republicans who had voted to impeach Trump on a charge of inciting an insurrection.

Of the half-dozen lawmakers who rushed to put out a statement in support of Rep. Jim Jordan when it was reported that the Ohio Republican covered up sexual abuse allegations on the Ohio State University wrestling team, none have defended Gaetz. But Jordan has. And so has Rep. Marjorie Taylor Greene (R-Ga.), whose dabbling in conspiracy theories cost her committee assignments earlier this year.

In an op-ed published Monday, a defiant Gaetz said he would not resign from Congress and compared his own predicament to allegations made against Trump and Supreme Court Justice Brett Kavanaugh, whose Senate confirmation battle descended into chaos after he was accused of sexually assaulting a former high school acquaintance. In a precisely worded statement, Gaetz denied ever paying for sex or having sex with an underage woman.

“My lifestyle of yesteryear may be different from how I live now, but it was not and is not illegal,” Gaetz wrote.

“If true, Matt had engaged in the very practice he’d defended me from,” Hill wrote in Vanity Fair. “Sharing intimate images or videos of someone without their consent should be illegal, plain and simple.”

The congressman’s strenuous denials have been accompanied by an odd series of claims that his father became the victim of an extortion plot involving a former Justice Department official earlier this year. In his March 30 appearance on Carlson’s primetime show, Gaetz said his father, former Florida Senate president Don Gaetz, had worn a wire during a meeting with one of the individuals involved in the alleged extortion plot. The Florida Republican also said the FBI was investigating the situation.

“If you just saw our Matt Gaetz interview, that was one of the weirdest interviews I have ever conducted,” Carlson told viewers afterward.

Gaetz has not appeared on Fox News since.