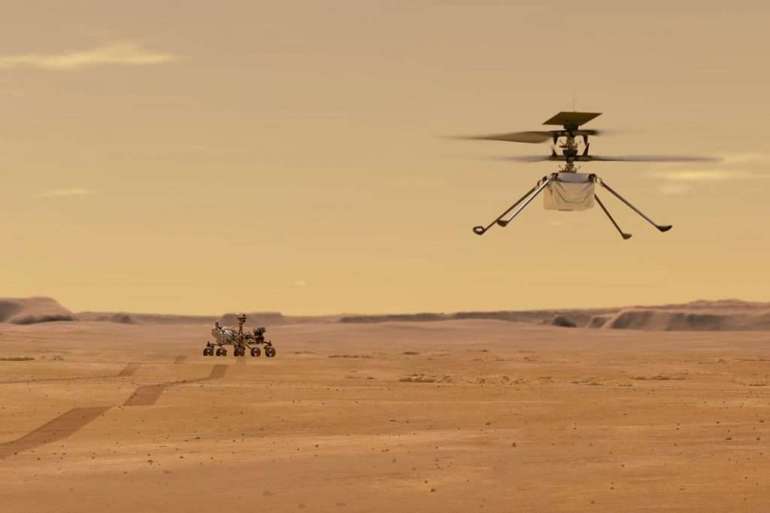 POLITICO spoke to more than half a dozen lawmakers in both parties who were optimistic that the energy around the lightweight helicopter’s first flight, as well as the broader rover mission whose long-term goal is to bring Martian soil back to Earth for study, will ultimately mean a boost for future budgets.

That doesn’t mean securing the funding will be easy, even with support from both parties. Lawmakers are contending with a growing to-do list of top priorities to fund on Earth, including repairing the nation’s infrastructure and boosting the post-Covid economy, while the nation’s debt looms large.

“I know there are skeptics out there who think we can do a lot more uncrewed [missions], but the prospect of taking human beings back to the moon and on to Mars excites people across politics and religion and age,” said Rep. Don Beyer (D-Va.), the chair of the House space and aeronautics subcommittee. “Struggles in Washington and the government writ large are not fun. It’s difficult to get unity. But with NASA, especially with going to other planets, there’s a great sense of bipartisanship.”

There’s a lot to be excited about on the Ingenuity mission. The four-pound helicopter’s super lightweight blades must spin five times faster than a normal helicopter’s to allow it to fly in an atmosphere so thin that it’s equivalent to 100,000 feet on Earth. And it all must happen autonomously because of the 30-minute round trip communications lag.

Ingenuity, which arrived on Mars in February attached to the underside of the Perseverance rover, is a technology demonstration mission that will last only 31 days.

For the first flight, officials designated an “airfield” on Mars, a flat area with enough texture that the helicopter can use its camera to keep track of where it is. Ingenuity will climb at roughly three feet per second, hover for up to 30 seconds, make a turn in mid-air and then land. The flight may seem short, but the Wright Flyer’s first flight lasted only 12 seconds and changed the world. The helicopter even includes a nod to that history: A postage-stamp sized piece of cloth from the Wright Brothers’ aircraft is attached to Ingenuity.

If the helicopter lands safely from the first flight, engineers are expected to conduct several other test flights during the 31-day mission.

NASA is hopeful that, if successful, the technology will allow the agency to use future aircraft to explore new parts of the Red Planet, help rovers plot their best route to a position, act as scouts for humans on future missions and even to explore other planets.

“If we can do this on Mars, we can do it other places, perhaps on Venus,” Bobby Braun, the director for planetary science at NASA’s Jet Propulsion Laboratory, said in a recent press conference.

There’s a long communications lag, so there will be no live video. But engineers are hopeful the Perseverance rover nearby will be able to capture photo and video of the helicopter in flight. And Ingenuity has cameras that will capture the first aerial imagery of Mars.

The helicopter cost about $80 million to build, and it’s expected to cost $5 million to operate during its month-long test mission, according to data from the Planetary Society. The Perseverance rover project overall is expected to cost nearly $3 billion. The majority of that was spent developing and building the spacecraft, while operating costs during its two-year mission will be about $300 million.

That’s just a fraction of what Congress will need to appropriate if the U.S. wants to send people to Mars. A trip to Mars is expected to cost about $500 billion to design and build a spacecraft, plus extra money to support humans for the duration of the mission. The cost for any sort of sustained Mars program beyond a single mission would easily soar into the trillions.

“I think this is going to be something very, very valuable to mankind, and although I am a conservative Republican, I believe we need to have funding and a reauthorization for NASA programs … so we can answer questions that man has been asking for thousands of years,” said Rep. Brian Babin (R-Texas), the ranking member of the House space subcommittee who represents the Houston suburbs close to NASA’s astronaut training headquarters. “We’re on the verge of really great things.”

NASA’s budget has a long way to go to catch up to that. Congress appropriated $23.3 billion for the space agency in fiscal 2021, and the Biden administration’s fiscal 2022 plan released Friday inches the agency up to $24.7 billion. At the current level, NASA would have to devote its entire budget for more than 20 years to the Mars program to make a mission happen — a task that will take support from both parties.

NASA has not set a timeline to send people to Mars. Some space boosters on Capitol Hill have pushed for the first crewed mission to happen in 2033, but, while the Biden administration has been supportive of reaching Mars, it has not spoken about a timeline to do so.

NASA will have to make the case for spending this huge amount of money when there are so many other critical priorities on Earth and a growing deficit. When the federal government is faced with strengthening the economy, controlling the pandemic, increasing the number of jobs and defending against foreign threats, it’s not hard to imagine space getting shortchanged.

Polling also consistently finds that the American people want NASA to focus on monitoring Earth’s climate and protecting the planet from asteroids. While human exploration generates a lot of excitement when it happens, support for those programs is always at the bottom of the list compared to the space agency’s other priorities including conducting scientific research and developing new technology that can be adapted for use on Earth.

Still, America has historically been able to accomplish great things in space when it prioritized that spending, such as at the peak of the race to the moon, when NASA’s funding was more than 4 percent of the federal budget.

“Look at Apollo. That wasn’t a Democratic or Republican program, it was an American program and really a global program,” said Rep. Ami Bera (D-Calif.), a member of the House Science, Space and Technology Committee. “Space really should be nonpartisan. … I think you’ve seen that. We live in a partisan environment, but you haven’t seen the Biden administration rush to undo things Trump did in space.”

In fact, the Biden White House has voiced support for three of Trump’s top space initiatives: the Space Force, the National Space Council and the Artemis program to return astronauts to the moon. White House press secretary Jen Psaki even acknowledged recently that space is one of the only areas where Biden and Trump agree.

One reason might be because debating space programs that will happen years or decades into the future is different from debating how much your neighbors will be taxed or what the federal government’s budget should be next year.

“It’s exhilarating, it’s thrilling, but it’s also a different kind of debate than most committees have,” Lucas said. “When you’re looking past the horizon of anybody alive … that’s just different.”

Space is also one of the few areas where nearly every member of Congress has a parochial interest, whether that’s major launch infrastructure or aerospace suppliers contributing pieces to NASA programs.

“Most of us … have businesses in our states that … either are contracting with NASA … or they are part of the aerospace industry. That’s another reason why there’s a great deal of interest. People understand potential economic opportunities,” said Sen. Jeanne Shaheen (D-N.H.), who chairs the Senate appropriations subcommittee that funds NASA. “There’s still this idea on the part of a lot of people that it’s an industry that’s mainly in Florida or Texas or Alabama. That’s not true at all. It’s all across the country.”

The bipartisan relationships built on the space committee means lawmakers can come together in this narrow area, despite drastic differences in other areas.

“I have a good relationship with Brian Babin, who is the ranking member on the space subcommittee,” Beyer said. “I don’t like everything he does. He voted not to impeach the president and not to accept the Pennsylvania election results, but we’re very much on the same page when it comes to NASA and certainly Ingenuity.”

UPDATE: After this story was published, NASA delayed the flight until at least Wednesday. The story has been updated.