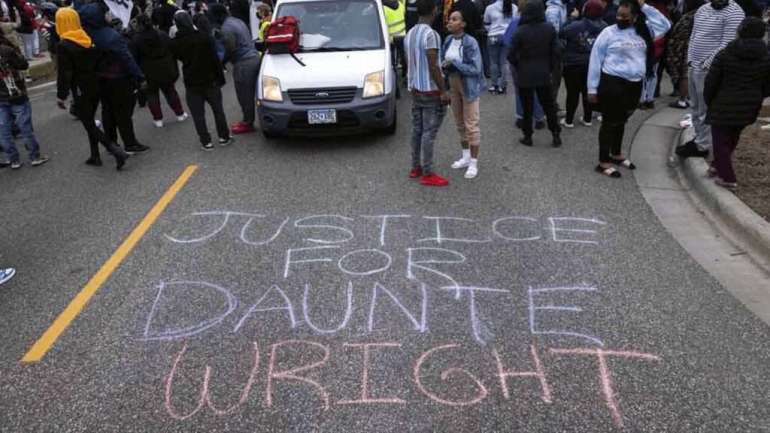 The explanation from Gannon came during a news briefing by city leaders and law enforcement officials, after the police chief played the officer’s body camera footage of her deadly encounter with Wright.

“As I watch the video and listen to the officer’s commands, it is my belief that the officer had the intention to deploy their taser, but instead shot Mr. Wright with a single bullet,” Gannon said.

“This appears to me, from what I viewed and the officer’s reaction in distress immediately after, that this was an accidental discharge that resulted in a tragic death of Mr. Wright,” he added.

Biden said he had viewed the “fairly graphic” footage but was reserving judgment regarding the officer’s culpability.

“The question is whether it was an accident or intentional,” he said. “That remains to be determined.”

The president said he had been in contact with Gov. Tim Walz of Minnesota and local officials after the Sunday shooting.

Wright’s death has provoked violent protests in Brooklyn Center and exacerbated community tensions amid the ongoing trial of former Minneapolis police officer Derek Chauvin for the killing of George Floyd last summer. Biden, as he has done previously during similar events last year, decried the violence while distinguishing it from the rest of the community response.

“The fact is that we do know that the anger, pain and trauma that exists in Black community in that environment is real, serious and consequential,” he said. “But that does not justify violence.”

Walz, a Democrat, said that Wright’s death underscored the need for policing reforms raised after Floyd’s death sparked months of demonstrations across the country.

“Our time was made clear last May in Minnesota,” Walz said. “And in the midst of this trial that the world’s watching, the situation repeated itself yesterday. So this is a call to us again, to Minnesota and to the rest of the nation.”

Asked whether Wright’s shooting would be referred to the Hennepin County Attorney’s Office for possible charges against the officer, Gannon, Brooklyn Center’s police chief, said it was “far too early to know which authority is going to be prosecuting, if there is a prosecution.”

Although the Minnesota Bureau of Criminal Apprehension is investigating the shooting, no representatives from the bureau were present at the briefing Monday, and “the releasing of video this early in a situation is not something that they condone,” Gannon said.

But Gannon said he made the decision to release the body camera footage anyway because “I felt the community needed to know what happened. They needed to see it. I needed to be transparent. And I wanted to be forthright. We had to do respect to Daunte, as well.”

In other remarks to reporters, Gannon said he had not been made aware of a gun being found in Wright’s vehicle, and he refuted speculation that the officer involved in the shooting had committed suicide.

“I would say it is a reminder of the pain, the anger, the trauma, the exhaustion that many communities across the country have felt as we see these incidents continue to occur within just a few miles of where the tragic events happened just a year ago,” Psaki said, referring to Floyd’s death in Minneapolis in May 2020.