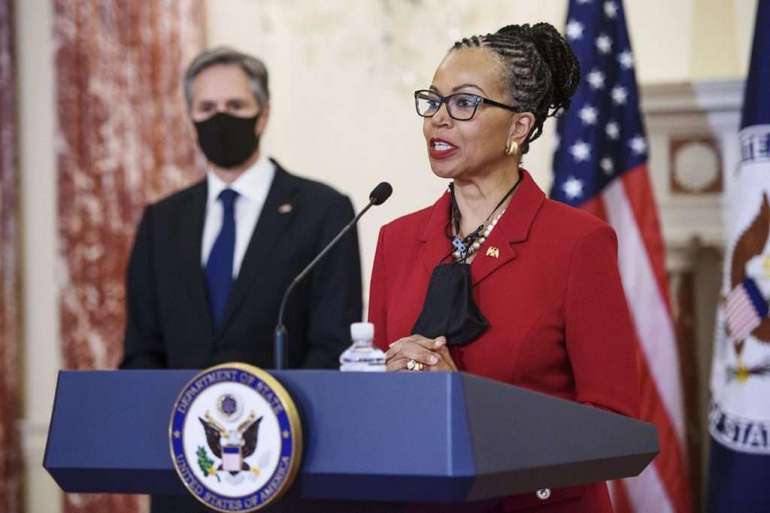 “It’s perpetuated by policies, practices and people to this day,” Blinken said.

Abercrombie-Winstanley was the former ambassador to Malta during President Barack Obama’s second term, served as a senior career diplomat for more than three decades, and was the first woman to lead a foreign diplomatic mission in Saudi Arabia.

“We have the talent to become a model in diversity, equity and inclusion in the workforce,” she said after being introduced by Blinken. “We will ensure the Department of State is the organization that deserves the devotion, sacrifice and the dedication that so many of us have freely given.”

The department has long struggled to reflect the diversity of the United States, and the problem has gotten more pronounced in recent years by several measures. For instance, Black employees make up a smaller share of its workforce than in 2002, according to 2020 Government Accountability Office data.

Abercrombie-Winstanley has previously spoken about her experience working in the department amid colleagues who were overwhelmingly white and male.

“In many ways, it was very lonely. It was very lonely,” she said during a 2019 POLITICO podcast. “Walking down those long halls of the Department of State, you didn’t see a lot of people who looked like you. You certainly had to deal with impostor syndrome.”

Diplomats of color have also raised concern to POLITICO and others about the unwritten rules they feel the need to abide by in order to advance their careers in the State Department.

Abercrombie-Winstanley will report directly to the secretary of State, Blinken said.

President Joe Biden has promised diversity will be a key facet of his administration, though outside groups have at times had to lobby for representation in the cabinet and for other high-ranking positions throughout the federal government.