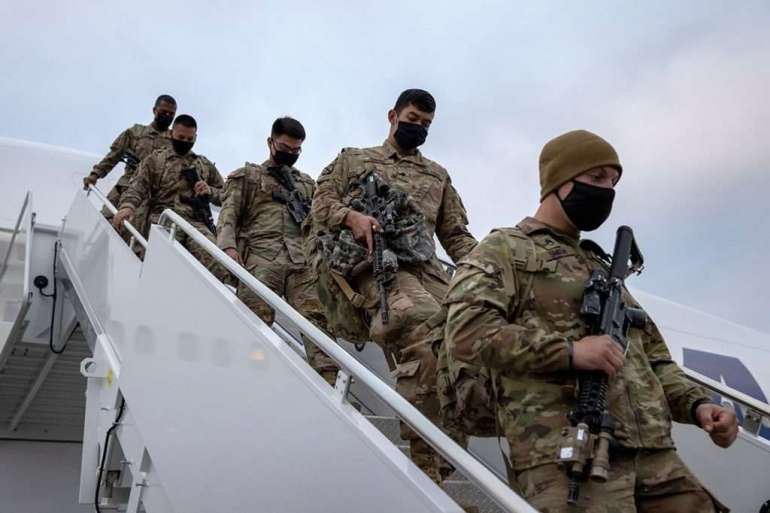 Reports of the Biden administration’s plans spurred praise from progressive lawmakers who have long pushed for a complete withdrawal from the country.

“I applaud President Biden for achieving an impossibility here in Washington: ending a forever war. It is an act of extraordinary political courage and vision,” said Rep. Ro Khanna (D-Calif.), a longtime proponent of scaling back military deployments overseas.

GOP hawks, on the other hand, were quick to deride the decision as premature and short-sighted and called on Biden to reconsider.

“To say I’m concerned is a vast understatement — this is a reckless and dangerous decision,” said Sen. Jim Inhofe (R-Okla.), top Republican on the Armed Services Committee. “No one wants a forever war, but I’ve consistently said any withdrawal must be conditions-based. Arbitrary deadlines would likely put our troops in danger, jeopardize all the progress we’ve made, and lead to civil war in Afghanistan — and create a breeding ground for international terrorists. We’re talking about protecting American lives here.”

Biden administration and Pentagon officials have signaled for months that they will not meet the May 1 deadline to withdraw all American troops from Afghanistan.

Biden would not commit to a withdrawal by May 1 during a press conference last month, saying that a full withdrawal by that date would be difficult. But he added that he “can’t picture” troops on the ground in Afghanistan next year.

“We will leave. The question is when we leave,” Biden said.

And with just weeks to go before the deadline, military officials had said it would be logistically next to impossible to meet it. The roughly 3,500 troops could be airlifted out fairly quickly, but a rushed exit would pose force-protection challenges and necessitate destroying sensitive equipment or leaving it in the hands of the Afghan security forces.

Dating back to the Trump administration, Gen. Mark Milley, chairman of the Joint Chiefs of Staff, and Gen. Scott Miller, commander of U.S. Forces-Afghanistan, had argued in favor of keeping a small U.S. presence on the ground, primarily made up of special operations forces and paramilitary advisers, to keep the Taliban in check and counter the simmering terrorist threat from al Qaeda and ISIS, according to three former officials familiar with the discussions.

Meanwhile, Gen. Frank McKenzie, head of U.S. Central Command, recently warned that if the American pullout goes ahead before diplomatic efforts between the Taliban and the Afghan government can yield a deal, fighting will intensify across the country.

“If we withdraw and no deal was made with the Taliban, I think the government of Afghanistan is going to be in for a very stiff fight to retain possession” of urban population centers, McKenzie warned.

Military leaders, particularly in the special operations community, are concerned that when the U.S. withdraws, the terrorist threat will evolve and grow in Afghanistan’s vast uncontested regions, said one former military official familiar with the discussions.

But still, there is a growing sense that “it’s been 20 years, how much GDP and how much treasure and blood are we going to throw at this impossible problem?”

Ahead of the president’s decision, the Pentagon had presented the president the full range of options from maintaining current force levels to withdrawal troops, a senior U.S. defense official said.