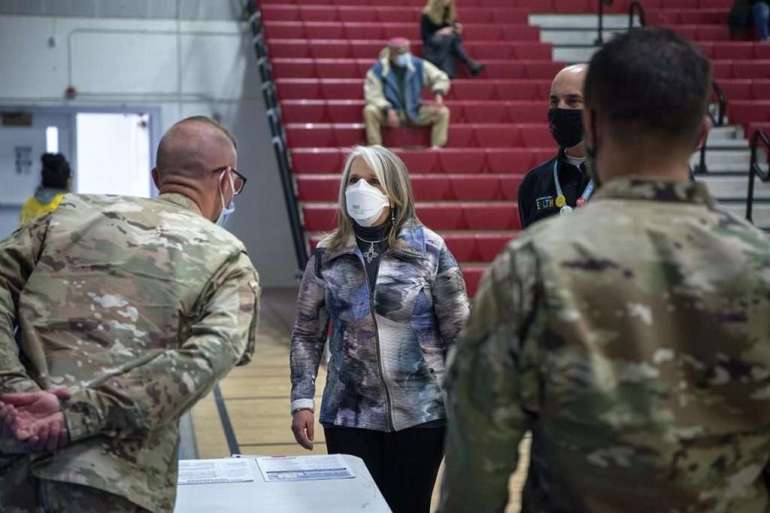 While frustrated residents in other states were refreshing dozens of websites through the night, New Mexico offered a one-and-done registration that automatically scheduled people for appointments. Earlier in the vaccine rollout, when supply was scarce, the state’s appointment system only alerted residents when vaccines were available in their area. That cut down on people from affluent areas driving into low-income communities to get shots, a pattern that hampered equity efforts in several other states.

Lujan Grisham, a former state health secretary who was in contention to run President Joe Biden’s health department, said she was initially reluctant to build a state-run vaccine registration website, concerned it would be too confusing for people to use. But on her staff’s recommendation and with broad support from health care providers, she gave the go-ahead.

By Jan. 4, just weeks after the Food and Drug Administration cleared the first two shots from Pfizer-BioNTech and Moderna, over 10 percent of New Mexicans had registered for an appointment. That number grew to 20 percent by Jan. 15.

“That was really visionary,” said Claire Hannan, the executive director of the Association of Immunization Managers. “When they expanded [eligibility], they had a website that was functioning, and it wasn’t competing with a number of other websites. That’s been a key challenge with other states.”

By the end of January, the Albuquerque-based company that developed New Mexico’s website said it had inquiries from several other states, though none ultimately signed on.

Centralized control — both in government and the New Mexico’s highly concentrated health system — also helped officials move quickly to vaccinate residents that might be hard to reach. New Mexico doesn’t have any county or city health departments and just two major health systems. One of those systems, Presbyterian, tapped into Medicaid data it holds as owner of the state’s largest Medicaid insurer to identify homebound New Mexicans — and then dispatched Albuquerque Ambulance Service, which it also owns, to administer shots where they live.

That also helped state efforts to reach people who may have trouble booking an appointment online. The state also used mobile clinics to reach its sizable homeless population and established pop-up clinics attached to a church, hoping that trusted community leaders could persuade people still on the fence about whether to get vaccinated.

Not everything has gone according to plan in the state. Despite the health department’s efforts to allot more doses to needier communities, federal data indicates there is room for improvement. A CDC report last month found that the state ranked 37th in vaccinating people in “high vulnerability” counties, a measure that accounts for factors like access to transportation, housing conditions and minority populations. Matt Bieber, a New Mexico health department spokesperson, said the CDC data may be incomplete because of reporting lags.

State officials debated overhauling their strategy for allotting vaccines, but they stuck with their plan and sent more doses into high-need communities. Now, New Mexico has vaccinated higher rates of its Black and Hispanic populations than any other state.

Its unique demographics also helped. More than half of adults 65-plus are people of color, about double the national average. New Mexico was slower than most to lower the minimum age to receive a vaccine, so as it focused on inoculating its elderly population, it was more likely to reach people of color than other states. It’s now among the many states that have opened up appointments to everyone 16 and older, ahead of Biden’s April 19 deadline to expand eligibility.

While Native American tribes and pueblos have been disproportionately hit by the coronavirus, New Mexico as a whole fared better than its neighbors through most of the last year. But New Mexicans have died at one of the higher rates in the U.S., which health experts have partly attributed to how many of the state’s residents suffer from underlying health conditions.

The state experienced one of the nation’s worst outbreaks last fall, with average daily infections increasing 20-fold to over 2,000 at the peak in late November. Cases have sharply dropped since then, and New Mexico is now seeing fewer than 200 new infections per day, one of the lowest per capita rates in the country. David Scrase, the state’s human services secretary, said he sees a correlation between New Mexico’s strong vaccination campaign and its avoidance of a surge that’s now challenging other areas.

Like other states, New Mexico officials are eyeing the challenge of reaching people who may be hesitant to get vaccinated or find it difficult to obtain a shot.

New Mexico has already launched a “trusted voices” campaign that features local residents encouraging their peers to get vaccinated. Lujan Grisham said the state will soon launch a campaign specifically targeting younger men, who are among the more vaccine-hesitant groups.

“We have the first million people vaccinated,” said deputy health secretary Laura Parajon at a virtual town hall last week. “But that last million is going to be more difficult to reach.”