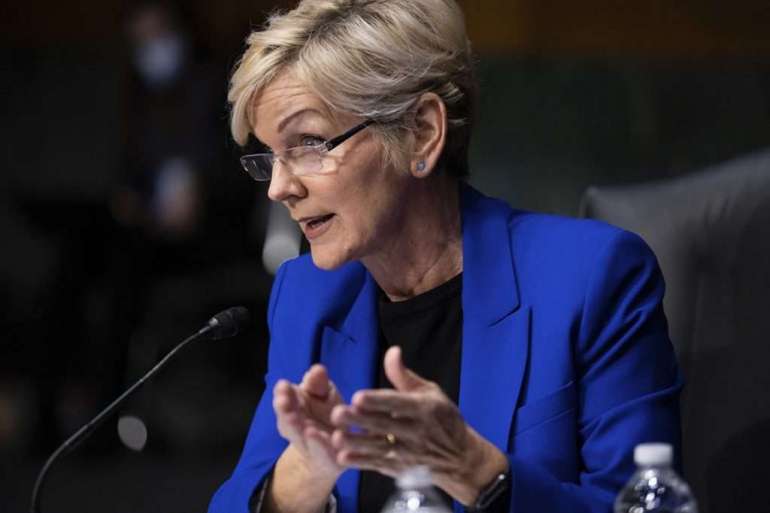 Clean energy standard: The Energy secretary said no decisions have been made on how exactly such a standard would work, but said the Biden administration is open to ways that a CES could work for both “the pockets of this country that might have concerns” and for those states that have “led by example” by enacting their own standards.

President Joe Biden unveiled an infrastructure and jobs plan last month that proposed a federal clean electricity standard and in his recent fiscal year 2022 discretionary budget request called for $1.9 billion in a Building Clean Energy Projects and Workforce Initiative at the Energy Department in support of it.

“So much of it depends on how it is crafted, right?” Granholm said Tuesday of the potential CES. “The question about whether you can get a clean energy standard through regular order or reconciliation — all of that still remains to be seen. But there’s also a way to consider crafting something that provides incentives to the states to be able to make that happen also, so that might be another venue.”

But the reconciliation pathway could be challenging, as Senate Energy and Natural Resources Chair Joe Manchin, a moderate Democrat from West Virginia, wrote in an op-ed recently that he did not “believe budget reconciliation should replace regular order in the Senate.”

Granholm stressed however the need for a mechanism, like a CES, to create strong demand in the U.S. and thus drive supply.

“You can’t put the cart of supply before the horse of demand,” she said. “You’ve got to go down both paths and the clean energy standard is one way to do that.”

The Biden administration’s “American Jobs Plan” proposed a 10-year extension and phase down of a direct-pay investment tax credit and production tax credit for clean energy generation and storage, which it proposed pairing with “strong” labor standards. Currently, energy storage technologies can only take advantage of the tax credit when they are integrated with other eligible renewables.

“The bottom line is, I think, whether it’s tax credits, whether it’s refundable tax credits, tax credits that can be monetized upfront and/or over the period of time … that’s still all subject to negotiation clearly in Congress,” Granholm said. “The American Jobs Plan has laid out a framework of what things should look like, but hopefully we have robust support for battery storage, for energy storage.”

Clean energy jobs: The secretary was also pressed about the push to unionize clean energy manufacturing and whether that could increase costs and slow deployment.

“We have for a very long time bowed to the altar to cost only in manufacturing in general,” Granholm responded. “We have to decide, I think, what we want to do. Obviously, you want power to be inexpensive and you want it to be reliable and all of that.”

She touted the role of the Office of Energy Jobs at DOE to ensure investments in infrastructure require prevailing wages and better rights for workers, as well as to address potential concerns from communities transitioning away from fossil fuel jobs.

“There’s a balance in there and I think we can achieve that as a nation,” Granholm said. “We think clean energy can be good-paying for the people who are working in it and we want to make sure that it’s good-paying and that the rates are affordable. The United States government is willing to put a lot of money [upfront into] reducing some of the capital costs so that we can make it affordable.”

Climate change: Granholm also said passage of the administration’s infrastructure plan could signal the United States’ credibility and commitment to addressing climate change to other countries ahead of the 2021 United Nations Climate Change Conference in Glasgow, Scotland this year.

“We can’t get on our moral high ground when we have not been able to do what we’re asking others to do,” she said. “This is another reason why it’s so important to pass the American Jobs Plan, to make sure that we can in fact legitimately go to Glasgow and say, ‘Look what we have done.'”