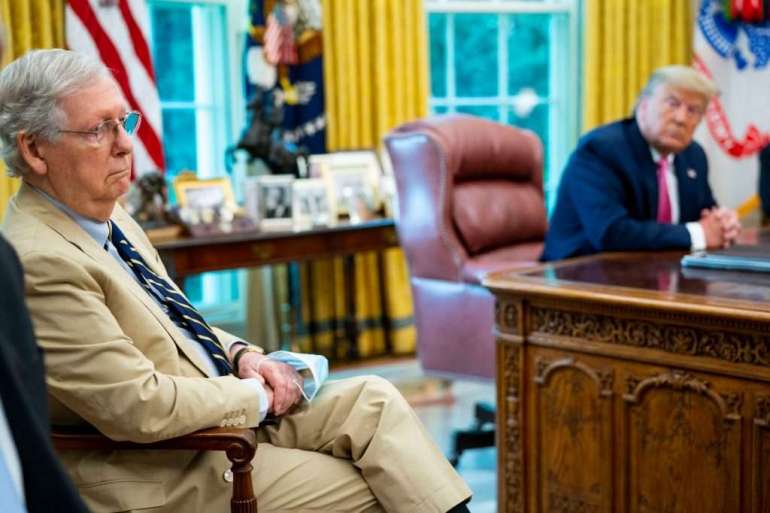 In part it’s the source of his anger that marks his attack on fellow Republicans unique—and in part, it’s because he doesn’t mind what kind of damage he does to the party. Disputes between fellow party members are hardly new, but they’re usually limited (on both sides) by an understanding of the collateral damage. When one side really doesn’t care, all bets are off.

Intra-party disputes have historically taken place during the election process, unlike this one, and they’ve usually been driven by major political arguments, a clash of personal ambitions, or both. Theodore Roosevelt tried to unseat his chosen successor, William Howard Taft, for the GOP nomination in 1912—and when Taft won, he then ran a third-party campaign arguing that Taft had betrayed the Republican agenda. In 1936, Al Smith tried to deny President Franklin Roosevelt a second term, based in part on FDR’s aggressive use of federal power to fight the impact of the Depression. Eisenhower and Robert Taft (son of William Howard) staged a Pier Six brawl in 1952 over the direction of the Republican Party. Robert Kennedy ran against LBJ in 1968 with the Vietnam War as his cause; Ronald Reagan was the conservative challenger to the incumbent President Gerald Ford in 1976; Ted Kennedy was the liberal challenger to President Jimmy Carter in 1980.

Once that battle is over, there’s powerful pressure to shake hands, or at least coexist, and take the fight to the other team. Bob Kerrey held his 1992 primary rival Bill Clinton in minimum high regard—“He’s an exceptionally skillful liar,” he said of Clinton at one point—but he cast the deciding vote for Clinton’s economic package in 1993 because he didn’t want to effectively cripple a Democratic presidency before it had begun. It takes a special kind of animus for a member of one party to actually defeat a key goal of his or her party’s president, as John McCain did in July, 2017, when he walked into the well of the Senate and dramatically cast a thumbs-down “no” vote to kill Trump’s attempt to repeal Obamacare; perhaps Trump’s sneer that he “liked heroes who weren’t captured” may have had something to do with that vote.

But then, there’s always been something different about Donald Trump and the Republican Party—in part because he seems to have a stronger connection to its voters than the party leadership does. Even after he won the nomination in 2016, four of the five previous GOP presidential nominees refused to endorse him, as did fully a fifth of the Republican senators…and he won a higher percentage of Republican voters that November than did Ronald Reagan. This past January, seven senators of his own party voted to convict Trump of high crimes and misdemeanors, and Trump’s support among rank-and-file party members was effectively unshaken.

Once Trump survived, the party found itself having to pay respects again, and not just with the silver bowl Rick Scott handed him earlier this week. The same Republican Senate leader who denounced Trump for a “disgraceful dereliction of duty” and held him “practically and morally responsible for provoking” the January 6th Capitol riot duly said he would support him as the 2024 nominee. House GOP leader Kevin McCarthy and presidential wannabe Nikki Haley have executed even more breathtaking pirouettes, from condemnation to supplication. They and other Republicans seem to have looked at January 6th as the final straw—the climax of behavior so egregious that it finally gave them free rein to call out the president—and then watched, to their horror, as Trump, like Freddy Krueger, emerged whole and ready to inflict fatal political wounds on those who defied him.

Nor did Republicans need to call Trump out for his behavior in order to draw his anger. The standard for Republican heresy went far beyond a vote to impeach or convict. The simple willingness to follow the plain commands of the law, as did Kemp, or acknowledge that Joe Biden had won, as did Ohio Governor Mike DeWine, was enough.

For Republican leaders, the urgent call is to find some way toward a truce of sorts. If the party can manage to hold itself together, they know full well that history will be on their side as they seek to retake the House and Senate, given what normally happens to a president’s party in the midterms.

They also know what happens when a headline figure who becomes power-hungry, or really doesn’t care about the collateral damage, goes after members of his own party. When FDR tied to “purge” Democrats in 1938, the party lost 72 House seats and seven Senate seats. Theodore Roosevelt’s third-party run against his chosen successor William Howard Taft doomed the Republican to a humiliating third-place finish in 1912.

Trump, too, took down the Republican establishment in 2016, and seems completely unchastened by his loss in 2020. Any plea to Trump to turn down the heat ignores a lifetime’s worth of behavior. Asking Trump not to insult those who have offended him is liking asking him not to exhale.