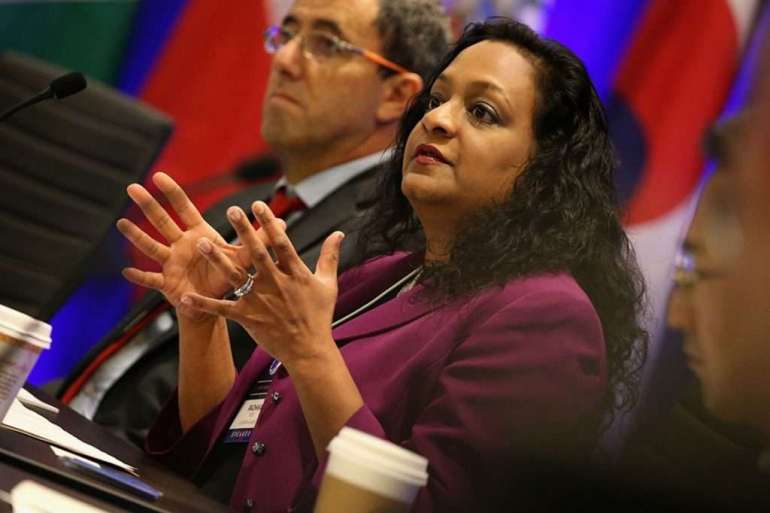 For now, Fox is principal deputy administrator of the water office, but during a virtual event on Monday following Vice President Kamala Harris’ visit to a water treatment plant in Oakland, Calif., EPA Administrator Michael Regan called her the “perfect person for this job at this moment in this time,” adding to speculation that she could be nominated to the assistant administrator post.

This transcript has been edited for length and clarity

There’s probably nothing that is more essential and valuable when you think about environmental justice and improving public health, particularly for communities that are disproportionately impacted by environmental challenges. And so, I think generally on the drinking water side and the wastewater side, it means things like, how do we target investments to those communities who are disproportionately impacted? How do we ensure that we are really meaningfully engaging communities as we develop important rules? That engagement piece is incredibly important. And then also, how are we monitoring the implementation of the rules that we make to ensure that there aren’t disproportionate impacts?

So when it comes to investments in water infrastructure, does that 40 percent commitment mean 40 percent of the dollars? It seems one of the clearer ways where we might be able to parse that.

We are early — 10 weeks into the administration — and I think that the president has made, absolutely, the most impressive and significant call for action around environmental justice that any president has made, which is incredibly exciting, and it’s going to take us some time to figure out how that is concretely operationalized.

But I will say that, for the Office of Water and for the EPA, it absolutely means that we want to see greater investment going to environmental justice communities as we move forward with a range of grant and loan programs.

In the context of infrastructure investment, the largest pot of money that the federal government has is the Clean Water and Safe Drinking Water State Revolving Loan Funds. But of course those are administered by the states, not by EPA. How does that affect the Biden administration’s ability to ensure that the money is reaching the most disadvantaged communities?

That’s a great question. Part of how I would answer that is, alongside this really significant call for investment through the American Jobs Act in infrastructure, the president has also directed the whole federal family to rebalance and commit to productive partnerships with states as well as to strengthen the nation-to-nation relationship with tribes.

And so, in the context of EPA and the Office of Water specifically, there is a lot of innovative work that states are doing with their SRFs. So one of the things we’re really interested in doing is hearing from the states about how is it we can support the more equitable implementation and use of SRF dollars.

Clearly water infrastructure and environmental justice are huge priorities for the administration. There are also a bunch of big regulations from the Trump era that the environmental community is hoping to see acted on. On Day One, the president put out a long list of regulations he wants his administration to review, including many that fall under EPA’s water office, such as the Steam Electric Effluent Limitation Guidelines, Clean Water Act 401 certification, and of course, the Waters of the U.S.

How are you going to prioritize these at EPA, especially given that taking on all of them immediately seems impossible?

As far as how we’re thinking about it, one, we want to of course make sure that everything we do is grounded in science and grounded in data. Fundamentally, that is the foundation of how we’re approaching, as you said, a big list of rules in Office of Water.

Two, we think it’s critically important, and we hear this from the administrator, that as we’re developing these rules, we really have to do them based and grounded in the wisdom, the voice, and the lived experience of those who have to either implement the rule or are affected by the rule. That’s residents, that’s farmers, that’s utilities, that’s frontline environmental organizations, it’s the states that have primacy for so many of these things.

The third thing about how we’re approaching the suite of rulemaking is, our North Star is sustainable progress. I think historically we have had a lot of ping-ponging on some of these issues as administrations change and really we want to have sustainable and balanced progress so that, at the end of the day, people’s lives are improved and our water bodies are protected.

And then I think, as a practical matter, there was a long list of things that, rightfully, the president asked us to review. We’re going through that review process, we’re doing it methodically, and then as we’re completing review on individual things, we’re making decisions. So, you saw the Lead and Copper Rule, we made a decision. You saw with the drinking water standard for PFAS, we made a decision and those are moving forward. So, I think we’re going to be staging and sequencing these as we do those reviews and be very transparent with the regulated community, the broader stakeholder community about how we’re making those decisions.

That description of balanced progress is a perfect lead-in to my question about Waters of the U.S. It’s clearly been a decadeslong fight and the battle lines are pretty well demarcated at this point. It’s really hard to see any scenario in which either side would be willing to try for middle ground. And so, on that issue in particular, I’m curious for how you’re going to approach it, and frankly how much political capital you and the Biden administration are willing to put into that issue, which is clearly a huge priority for all sides.

With WOTUS, it is the most foundational rule when it comes to our clean water program. We are reviewing the rule, the Navigable Waters Protection Rule. We are also hearing about how it has been going from an implementation perspective in different regions around the country. And we are going to be measured in how we move forward with it.

What our focus will be is to be informed by what we have learned from both the Obama Clean Water Rule and the Trump-era Navigable Waters rule. What is it that we can learn from these experiences? What worked? What isn’t working at the community level? And then how do we apply those lessons moving forward?

On PFAS, it does seem like we’re on a regulatory path here for a drinking water limit for PFOA and PFOS, and of course we’ve got additional monitoring slated in the next round of nationwide sampling for a bunch of PFAS. Do you feel this is all moving swiftly enough? There was a lot of frustration in recent years about the slow pace.

To me, with PFAS, I think we are taking some really good, foundational steps in the Office of Water and in other parts of the agency, but we need to do more. I mean, this is definitely a significant issue from a public health perspective, from a water quality perspective.

Our regulatory rulemaking — those are not easy, quick things, right? So I think also we have collaborative work with states as they’re doing work on PFAS. We have some modest funding, it would be wonderful to have more. So I think as we tackle this PFAS challenge, part of it is the regulatory piece, but how do we also bring some of these other tools that we have at EPA to tackle the challenges of PFAS in water?

The background and experience that you bring to this job include deep relationships with the water utility sector and a strong background on environmental justice and infrastructure. But that’s pretty different from the legal and regulatory background that most heads of the water office, under both Republican and Democratic administrations, have had. Do you see that as speaking to a shift in focus for the Biden administration, say away from the more heavy regulatory work that the Office of Water has traditionally focused on?

I think it signals a commitment of the Biden-Harris administration to do the work of the federal family in a way that is honoring community perspectives, it is grounded in partnership and collaboration with states and tribes and all that are impacted by our decisions. So I think selecting somebody like me — frankly, as a woman, as a woman of color in this leadership role, I think it is also part of the Biden-Harris commitment to building a federal team that reflects the diversity of this nation.

Absolutely I don’t think it means that we won’t have a focus on the regulation. As we saw, in the executive order, the president and the White House clearly laid out a list of regulatory rules in the Office of Water that we need to review, et cetera.

Administrator Regan had quite a great deal of praise for you at a water infrastructure event earlier this week. Do you anticipate being moved up to the assistant administrator post?

I am loving the job that I’m in. I will serve the administrator in whatever capacity.