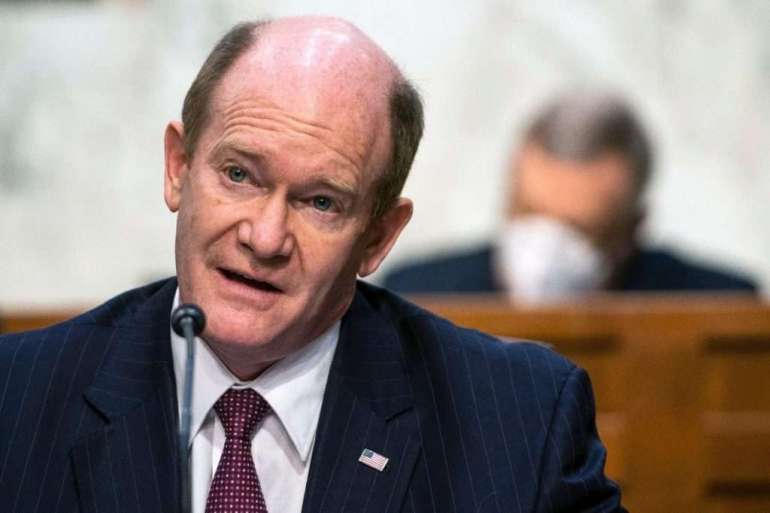 But as much as Republicans trust Coons is acting in good faith, his idea doesn’t address the divisive political question of how to pay for the package. And that leaves them reason to be wary, since Democrats are likely to turn around and pay for the rest of the infrastructure proposal by raising the corporate tax rate. Still, the GOP has reasons to go along — chiefly, the fact that a massive bipartisan bill would demonstrate the Senate can still legislate under the constraints of a filibuster that greatly empowers the minority party.

Across the Capitol, House Transportation Committee Chair Peter DeFazio (D-Ore.) has endorsed a similar strategy to Coons’, noting that the GOP counteroffer is “not an insignificant amount of money” and could help Democrats escape the restrictions that come with a party-line vote.

“There are myriad things you can’t do” while steering an infrastructure bill through the budget process to avoid a filibuster, DeFazio said.

Democrats are clearly at a crossroads on the critical decision of whether or not to work with their GOP colleagues. And the clock is ticking. During private conversations with members of both parties in recent days, White House chief of staff Ron Klain has signaled that there’s still time to wait for Republican buy-in, but that the party shouldn’t take forever, according to several people familiar with the discussions.

Members of the so-called G-20, a group of moderate senators in both parties, were divided over whether to work together on a smaller package during a call Thursday afternoon. Sen. Joe Manchin (D-W.Va.) expressed a desire to collaborate with Republicans but acknowledged that at some point Democrats might end up going their own way, according to a source familiar with the call. The group ended with no decision and plans to speak again next week.

As committees begin to craft the language for the bill, Democrats say they’re looking for policies that have bipartisan support. But they’re also signaling that they’re ready to go at it alone if Republicans low-ball them or drag things out.

“The wise thing to do is to work in two lanes. One is the reconciliation lane, which I don’t think would be wise to forgo, and the second is the bipartisan lane,” said Sen. Sheldon Whitehouse (D-R.I.).

But Whitehouse offered a warning to Democratic colleagues: “If they know that we’ve committed to the bipartisan lane, there’s a very strong incentive for them to make that a fake and to use it simply to slow down.”

Meanwhile, Republicans — who privately suspect that Democrats will once again use reconciliation — are eyeing a potential counteroffer.

“If we don’t move forward with a plan, if we don’t have some concepts, some ideas out on the table, then they’re going to say ‘You’re not dealing, you don’t care, you’re not in it,’” said Sen. Shelley Moore Capito of West Virginia, the top Republican on the Environment and Public Works Committee. She’s suggested spending as much as $800 billion and paying for it with user fees, but conceded there’s no agreement yet on an actual proposal.

Coons’ plan is similar to what some Republicans suggested Biden do on coronavirus relief: pick the areas that are bipartisan and do the rest under the protections of the budget reconciliation process, which evades the Senate’s 60-vote threshold to pass most bills. But infrastructure is a more challenging vehicle for that route than Covid aid was.

And Sen. Bill Cassidy (R-La.) said Thursday that Republicans were willing to negotiate only with the “implicit understanding that this will not lead to a second bill.”

Some Democrats privately argue that they shouldn’t allow Republicans to throw their weight behind a popular infrastructure bill without requiring their engagement on the more divisive debate over how to pay for it.

Adding to the complexity of the entire situation is that Congress has no explicit deadline for the infrastructure bill. House Speaker Nancy Pelosi is eyeing July for House passage, but the real deadline for the full package may be the end of September, when current surface transportation policy expires.

Some in her caucus are already suggesting that Democrats should delay if Republicans signal serious interest in working on the bill.

“Infrastructure’s different. It’s not time-sensitive, we don’t need to set up an artificial deadline, and it opens up the opportunity to, at least, give cooperation a chance,” said Rep. Dean Phillips (D-Minn.), who belongs to the bipartisan Problem Solvers Caucus, which is pushing for a bill with GOP support.

Sen. Mitt Romney (R-Utah), a member of the G-20 group of moderates, said he is in the early stages of developing a bipartisan infrastructure proposal but acknowledged that “this is a more difficult setting to reach common bipartisan ground, because of the pay-for element.”

The White House and Senate Democrats, meanwhile, are looking to avoid a repeat of the Obama administration’s effort to pass the Affordable Care Act in 2010, which ultimately passed along party lines despite extensive efforts to woo the GOP — a concern at least one Democratic senator raised at Tuesday’s caucus lunch.

Times have changed, but some Democrats still pride themselves on their bipartisan brands. That group is bigger than Manchin and Sen. Kyrsten Sinema (D-Ariz.), the Senate majority’s most well-known centrists. Sen. Mark Kelly (D-Ariz.) said he’s thinking of the man who formerly held his seat as he advocates for a bipartisan deal.

“I’m hopeful we can come to an agreement where we can do this through what … John McCain would call regular order,” he said.