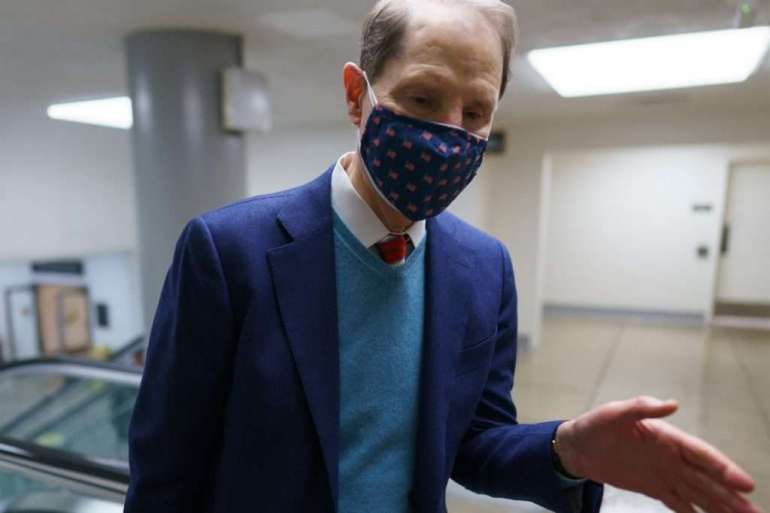 “I think the situation is fluid,” said Senate Finance Chair Ron Wyden (D-Ore.), who co-authored a bipartisan drug pricing bill in the last Congress. “But I know that in 2022, seniors are going to really be looking at the people who campaigned on [lowering drug prices] year after year after year. I brought that up to the president repeatedly.”

Democrats’ choices were already limited with a 50-50 Senate and a tenuous majority in the House, where Speaker Nancy Pelosi can only afford to lose two of her members on partisan legislation. The most pressing question for Democratic leaders is how to keep their moderate and progressive wings satisfied as they piece together sweeping legislation also affecting roads, taxes, broadband and schools.

Biden is due to lay out a plan in the coming weeks that will shape what’s to come on Capitol Hill. As they wait, progressives are demanding the package include an expansion of Medicare’s benefits and lowering its eligibility age from 65 to 60 or even 55, hoping to hold Biden to a campaign pledge he made in part to win support from the party’s left wing.

“We want to make sure we get this done,” said Rep. Pramila Jayapal (D-Wash.), chair of the 100-member Congressional Progressive Caucus.

Much still hinges on how big Democrats go on drug price controls in the infrastructure package. The billions of dollars in projected savings to government health programs could offset new spending in other areas like health coverage. But winning the votes will require a delicate dance in the face of opposition from a politically powerful industry that’s deeply enmeshed in the pandemic response.

House Democrats in the last Congress passed a progressive bill that allows the government to directly negotiate the prices of a broad swath of medicines and would save some $456 billion over a decade, according to congressional budget scorekeepers. Biden is said to favor a plan that resembles that.

“Both his campaign plan and the Democratic platform were much closer to HR. 3,” said a source close to Biden who worked on the transition and wasn’t authorized to speak on the record. “The Senate bill was introduced last year when Republicans controlled the Senate and it reflects that dynamic. It’s not what the moment calls for.”

But some Democratic centrists are instead pushing the bipartisan Senate drug price bill that Wyden co-authored, which would sanction drug companies that raise prices faster than inflation and is projected to save about $100 billion over a decade.

Sen. Bob Menendez (D-N.J.), whose state is home to big pharmaceutical manufacturers like Merck and Johnson & Johnson, said he opposes any bill that would treat the drug industry like a “piggy bank” to fund other policies. He was the lone Democrat to oppose an amendment to add a government negotiation provision to Wyden’s bipartisan bill, and could be an obstacle to progressives’ hopes for broader industry reform.

Along with drug pricing, Democrats have a grab-bag of other health provisions that could rake in big savings to offset coverage expansions. They could cancel a Trump administration rule that blocks drug industry rebates from going to the middlemen involved in Medicare drug plans, and which is projected to cost the government nearly $180 billion. They can also overhaul private Medicare Advantage plans’ billing practices.

Progressives want to be prevail after they yielded to Democratic leaders’ demands in the earlier rescue package to subsidize private Obamacare plans and commercial workplace insurance.

“The feeling I get in progressive circles is, ‘Fool me once, shame on me, fool me twice, shame on you,’” said Alex Lawson, executive director for Social Security Works who is closely aligned with Capitol Hill progressives.

The Progressive Caucus’ list of top priorities for the infrastructure zeroed in on Medicare enhancements and left out the permanent ACA subsidies prioritized by leadership, although Jayapal said it’s a “false choice” to pick between the two.

“Both can be done and both need to be done,” she said, adding that an aggressive drug price negotiation component could pay for both provisions. She stopped short of saying the caucus would block the bill if it doesn’t include its priorities.

Meanwhile, Sen. Bernie Sanders (I-Vt.) is pushing to give seniors dental, vision and hearing aid coverage through traditional Medicare — which has also long been a priority for Pelosi. Mindful of the fight ahead, he won’t say if excluding that expansion is a deal-breaker.

Some Democratic senators don’t appear to be ready for a deep dive into health policy and picking winners and losers before key details about roads and bridges are tied down.