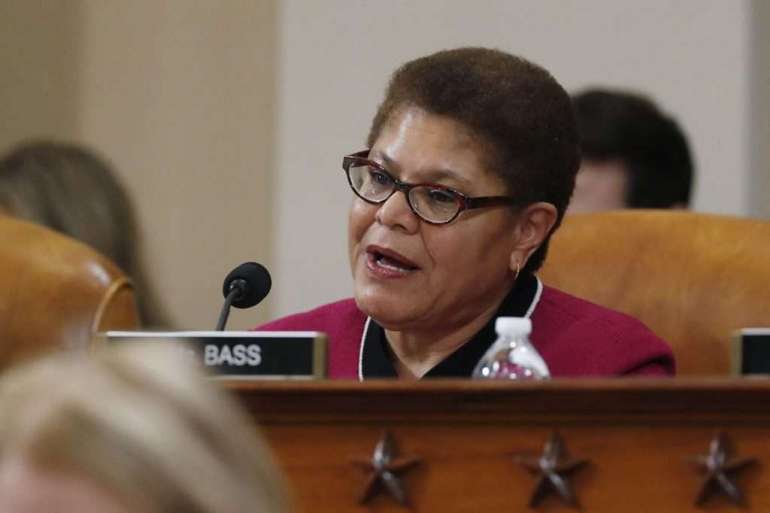 Bass is the sponsor of police reform legislation that passed the House in March on a near-party-line vote. The House-passed bill is named for George Floyd, whose death in Minneapolis police custody last spring sparked national outrage over policy brutality and systemic racism. The murder trial of former police officer Derek Chauvin in Floyd’s death is expected to wrap up and head to the jury with closing arguments on Monday; a verdict could come soon after.

“We just can’t see this happen, and to the extent that it is happening now,” Bass said. “And so having legislation that will hold police officers accountable, so that they don’t have immunity and feel that they can do what Derek Chauvin did and act with impunity, we need to be able to prosecute officers. We need to ban the choke hold. We need to ban no-knock warrants. There needs to be a registry of problem officers.”

Scott and Democratic Sen. Cory Booker of New Jersey have spearheaded the effort in the Senate.

“Senator Scott is key. I think he has been a complete honest broker. It’s been very helpful working with him. And so Sen. Scott and Sen. Booker are taking the lead in the Senate, because … the bill has already passed the House,” Bass said. “But we’re continuing to work together to find a solution that will garner the supermajority that is needed to pass legislation in the Senate.”

The policing legislation hasn’t advanced in the Senate, where 60 votes are needed to close debate on bills, necessitating at least some measure of bipartisan support.

Democrats now control the Senate and the Biden White House backs the House police bill. But in an evenly divided Senate, Democrats must win over at least 10 Republican senators to send the bill to Biden’s desk.