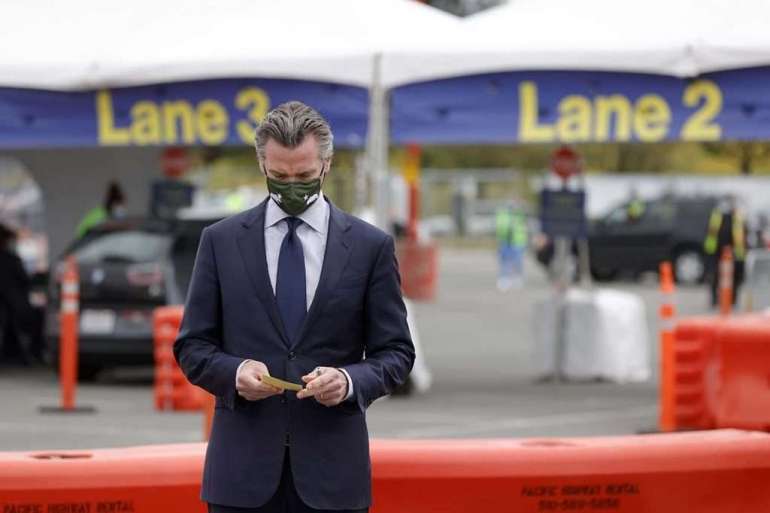 They believe the recall election lends a platform to make their case both to would-be voters and prospective donors who had written off California as a lost cause. The intense national attention on the race gives Republicans a high-visibility pulpit to present their vision in what will be the most prominent election in the U.S. this year.

The recall has already drawn out-of-state donors, and both recall organizers and Patterson said more have expressed interest now that the campaign has become a near-certainty. National figures and institutions like former Arkansas Gov. Mike Huckabee and the Republican Governors Association have waded in. The campaign has become a recurring cause célèbre on Fox News, offering the tantalizing possibility of defeating Democrats in their West Coast stronghold, and Patterson said she has seen a surge in new volunteers.

“Californians have really woken up to first [Newsom’s] hypocrisy, then his incompetence and now the desperation he’s in, and this allows Republicans to talk to a larger group of people who are more ready to listen to our ideas,” Patterson said, noting Californians sided with the party in 2020 by rejecting ballot measures to raise commercial property taxes, impose rent control and reinstate affirmative action.

Newsom remains in strong position to keep his seat in an overwhelmingly blue state. Polling shows he retains majority support thanks to a coalition of Democratic and no-party-preference voters. Meanwhile, California’s Covid-19 infection rates are now among the lowest in the nation, and the governor has announced plans to reopen California on a wide scale by June 15. Roughly half of adults have received at least one vaccine dose, and all now qualify for appointments.

The governor is counting on that comeback story — buoyed by a state budget bursting with revenues — to quell the voter unrest that grew throughout the pandemic.

But even if Newsom survives, “that doesn’t mean people who are pissed off about what he did don’t nail people at the local level,” said Republican consultant Sean Walsh, who worked in the White House for Presidents Reagan and George H.W. Bush.

Republicans are already organizing around hot-button issues that cross party lines, none greater than the fact that more California public schoolchildren have been shut out of classrooms than students elsewhere. Parents were so angry that they organized in liberal hotbeds like Berkeley and San Francisco to protest.

Republicans are also appealing to residents who have desperately wanted to dine out, worship, work out in gyms and watch their children play sports. While such activities are widely allowed again — some as a result of court action — GOP leaders believe voters will have a long memory. Momentum from the recall could pay dividends next year during the midterm elections.

“There is a lot of pressure built behind that dam, and you never know what will happen if the dam bursts,” Walsh said. “If a Democrat in a certain Assembly or Senate district thinks they can’t get caught up in Gavin Newsom’s issues with closing schools or closing restaurants, you should think twice.”

Kids aren’t just months behind in their classes, they’ve also been cut off from a key support system during the pandemic. POLITICO’s Delece Smith-Barrow breaks down how we can get schoolkids back on track.

Additional attention and resources could reverberate down-ballot as Republicans seek to reclaim or defend House seats and make inroads in the Legislature. The recall’s unexpected success shows “not only does the Republican Party have a heartbeat here and a chance to fight, but we’re bringing along moderate Democrats and independents” and gaining a chance “to earn their registrations,” said Orange County Republican Party Executive Director Randall Avila.

“Definitely having those eyes on California again helps a lot with our recruitment efforts,” Avila said. “I think you’re going to see more national money coming into California, at least in targeted areas where we can make some decisive wins.”

It won’t be easy. Republicans seeking a California resurgence have a steep demographic hill to climb in addition to one of the nation’s lowest coronavirus transmission rates and a surprisingly stable budget. And as much as recall supporters want to keep the focus squarely on what they call Newsom’s inept pandemic management, their formal recall petition lays out an anti-immigration and anti-tax agenda that critics say is at odds with California’s electorate.

“The truth is, the recall is being driven and led by people who are on the fringes of the right wing,” said Democratic strategist Katie Merrill, and when recall foes make that case, “it’s going to add to voters’ negative impressions of the Republican Party and likely have the opposite effect of what the Republican Party wants, which is they won’t build, they will lose registration.”

It’s also likely the race will draw in Republicans who have ties to Trump or share his agenda like Richard Grenell, a former Trump administration official, and Caitlyn Jenner, a television celebrity, Olympian and transgender activist. That could energize loyal Republican voters and bring in more national money. But Trump is enduringly unpopular among California’s larger electorate, including critical no-party-preference voters, and Newsom’s team is eager to portray the recall as a project of Trumpists and right-wing extremists.

The party has been here before. A 2003 recall drew enormous interest and ended with voters replacing Democratic Gov. Gray Davis with Republican Gov. Arnold Schwarzenegger — who was California’s last GOP governor. But Schwarzenegger’s tack to the center and his warning that the party was “dying at the box office” failed to help the party gain traction.

A recall “gives you an opportunity to provide a structure, both locally within various districts and statewide for other elections,” said Duf Sundheim, who was California Republican Party chair at the time. But “one of the biggest problems the Republican Party has faced is the people who were drawn to California from all over the country to work on the recall effort left the state because there weren’t the opportunities afterwards.”

Sundheim argued Republicans could find success this time by defining California Republicanism as a distinct entity from the national party, focusing on “candidates who are more competent than the current administration” rather than excessively ideological.

“If you make it an ideological thing, that’s not where the people of California are,” Sundheim said. “I think this is a great opportunity to showcase that there is an alternative and to have national attention focused on the fact that things are different here just as [Larry] Hogan has shown in Maryland, other [Republican] governors have shown in blue states.”

But recall organizer Anne Dunsmore argued the campaign’s momentum demonstrates a wider distaste with establishment politics and political parties. She argued the pandemic has read as a failure of leadership to many voters who believe “both parties have abused their leadership capacities.”

“If the parties want to go ahead and listen to the people, then they will be able to harness that energy. If they don’t listen, then people are going to move to more no party preference,” Dunsmore said. “If the [Republican] Party is willing to tone down the rhetoric and work on the issues being handed to them by Gavin Newsom there’s a lot you can do.”

Uniting the party’s factions could pose a challenging task as California Republicans navigate the same post-Trump course as their national counterparts. Former San Diego Mayor Kevin Faulconer is seeking to position himself as the pragmatic choice, noting he has won elections in a diverse big city, but he is all but certain to be vying for votes with more Trump-aligned candidates.

A crowded Republican field could also yield a fractured conservative vote that at best does not send a clear message about the party’s position and at worst telegraphs a party in disarray. But Sundheim argued the recall melee will still give Republicans a rare chance to reach a broad audience.

“I don’t think the circus nature of it will detract. I think it does provide the potential to focus attention,” Sundheim said. “The volume’s turned up.”