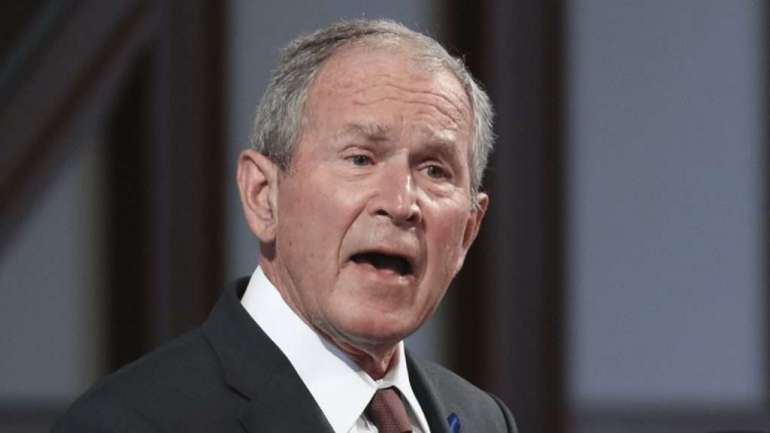 “I think if the emphasis is integrity and decency and trying to work to get problems solved, I think the person has a shot,” he said.

As for the Jan. 6 insurrection perpetrated by supporters of former President Donald Trump, “it did make me sick. I felt ill. And I just couldn’t believe it,” Bush said.

“What’s really troubling is how much misinformation there is and the capacity of people to spread all kinds of untruth,” he added. “And I don’t know what we’re going to do about that.”

Bush, who was on hand Tuesday to welcome 30 new U.S. citizens from 17 different countries during a naturalization ceremony on Rockefeller Plaza, also decried the divisive rhetoric that has surrounded the immigration debate in Washington — and reached new levels of hostility under his Republican successor in the White House.

“It’s a beautiful country we have. And yet, it’s not beautiful when we condemn [and] call people names and scare people about immigration,” he said. “It’s an easy issue to frighten some of the electorate. And I’m trying to have a different kind of voice.”

Bush has been reluctant to publicly rebuke Trump over the past several years, despite the previous president’s frequent attacks on members of his storied political family.

But Bush did express disapproval Tuesday of President Joe Biden’s announcement last week that all U.S. forces would be withdrawn from Afghanistan by Sept. 11 — a decision Biden said he made after calling Bush and former President Barack Obama.

Bush said he was “deeply concerned about the plight of women and girls” in Afghanistan and feared they were “going to have real trouble with the Taliban” after American troops left the country.

“I think the administration hopes that the girls are going to be okay through diplomacy. We’ll find out,” Bush said. “All I know is the Taliban, when they had their run of the place, they were brutal. Brutal.”

Bush’s remarks Tuesday were part of his efforts in recent days to lobby for a bipartisan immigration reform proposal. The former president’s push comes as the Biden administration works to stem the flow of unaccompanied migrant children at the southern border.