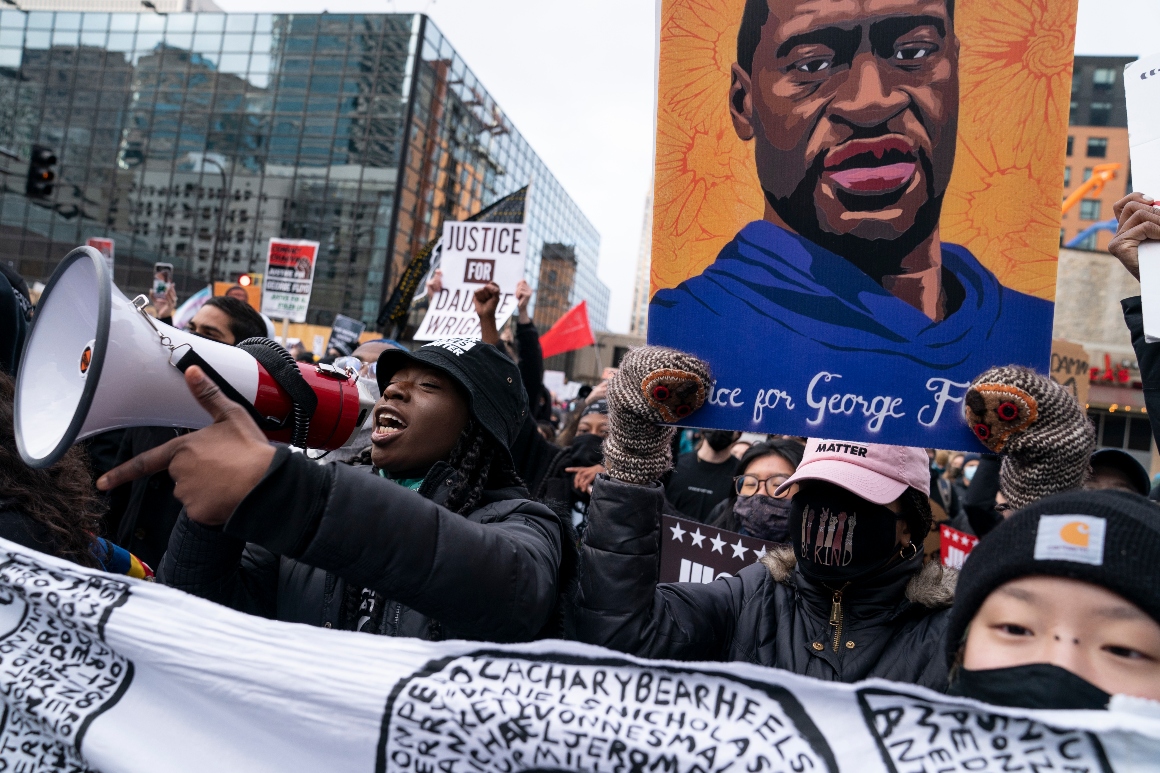 It was an act of police violence so searing that it set off a nationwide racial reckoning nearly one year ago. The fact that it was captured on video that reverberated around the world led to the swift firing of all officers involved and likely played a significant role in the jury’s decision to convict Chauvin.

Judge Peter Cahill, who read aloud the jury’s verdict, said Chauvin, who was handcuffed and remanded to the custody of the Hennepin County sheriff, would be sentenced in eight weeks.

The trial for the three former officers who stood by is expected to begin in August.

The Chauvin verdict comes after the jury heard 14 days of testimony from 45 witnesses — including Chauvin’s former superior officers — and deliberated for several hours over two days.

“Today, you have the cameras all around the world to see and show what happened to my brother. It was a motion picture,” Philonise Floyd, George Floyd’s brother, said at a news conference with the family and civil rights leaders. “The world seen his life being extinguished. And I could do nothing but watch, especially in that courtroom, over and over and over again, as my brother was murdered.”

Philonise Floyd said people from all over the world had told him they wouldn’t be able to breathe until he could. “Today,” he continued, pumping his fist as he spoke, “we are able to breathe again.”

President Joe Biden addressed the nation from the White House, where he presented the moment the country faces now as a potential “giant step forward in the march toward justice in America.”

“Let’s also be clear that such a verdict is also much too rare,” Biden said. “For so many people, it seems like it took a unique and extraordinary convergence of factors … for the judicial system to deliver just basic accountability.”

“Still, it can’t take away the pain. A measure of justice is not the same as equal justice,” Harris said. “This verdict brings us a step closer. And the fact is, we still have work to do. We still must reform the system.”

Both Biden and Harris called on Congress to pass the George Floyd Justice in Policing Act, with Biden conceding that while no verdict will resurrect Floyd, “through the family’s pain, we are finding purpose so George’s legacy will not be just about his death but about what we must do in his memory.”

The two leaders watched the verdict with staff in the White House Private Dining Room and spoke to Floyd’s family by phone from the Oval Office. Biden had told reporters earlier in the day that he was “praying the verdict is the right verdict,” and deemed the prosecution’s evidence “overwhelming.”

“Nothing is gonna make it all better, but at least now there’s some justice,” Biden told the family, according to a clip shared by family attorney Ben Crump.

“We’re all so relieved” that Chauvin was found guilty of all three counts, he said. “This is the first shot at dealing with genuine systemic racism.”

Moments before the decision came, Harris acknowledged in an interview with CNN’s Dana Bash that not even a guilty verdict “will take away the pain of the Floyd family.”

“It will not take away the pain of the communities, all communities, regardless of their color or geographic location, that felt sadness and anger in what they witnessed in that video,” she said.

In the call with Floyd’s family, Harris described Tuesday as “a day of justice in America” and the family as “real leaders at this moment where we needed you.” She also pledged to ensure Floyd’s legacy is intact, as activists and the family renewed calls for passage of the federal Justice in Policing Act.

Former President Barack Obama credited the jury for doing the “right thing.” But “we know that true justice is about much more than a single verdict in a single trial,” he said in a statement. “While today’s verdict may have been a necessary step on the road to progress, it was far from a sufficient one. We cannot rest. We will need to follow through with the concrete reforms that will reduce and ultimately eliminate racial bias in our criminal justice system.”

On Capitol Hill, several members of the Congressional Black Caucus gathered in a room off the House floor to watch the delivery of the verdict on a laptop. Several members grew emotional, including Rep. Emanuel Cleaver (D-Mo.), who took off his glasses, wiped his eyes and left the room to compose himself before an imminent news conference. Rep. Cori Bush (D-Mo.), also tearing up, clutched the arm of Rep. Ayanna Pressley (D-Mass.) after the verdict was heard.

Senate Majority Leader Chuck Schumer called the guilty verdict “an official proclamation of what so many of us have known for nearly a year: George Floyd was murdered by an officer who was sworn to protect and serve.”

“However, we should not mistake a guilty verdict in this case as evidence that the persistent problem of police misconduct has been solved or that the divide between law enforcement and so many of the communities they serve has been bridged,” Schumer added.

That sentiment was shared overwhelmingly by the Democratic officials and left-leaning groups who blasted out statements in the wake of the verdict.

Ken Martin, the chair of the Minnesota Democratic-Farmer-Labor Party, applauded the decision but challenged Congress and the state Legislature to deliver justice for Floyd through policy change.

“George Floyd should still be alive today, and until we pass serious police reform and accountability measures, the likelihood of this happening again here remains very high,” Martin said. “Our state and national legislatures have work in front of them to pass real police reform and accountability measures to deliver on the promises we have made to ensure this never happens again.”

At a news conference, Minnesota Attorney General Keith Ellison argued that the verdict wasn’t “justice” but “accountability,” which he framed as a step toward justice.

“Although a verdict alone cannot end their pain,” he said of the Floyd family, “I hope it’s another step on the long path toward healing for them. There’s no replacing your beloved Perry or Floyd, as his friends called him, but he is the one who sparked a worldwide movement, and that’s important.”

Jason Williamson, deputy director of the ACLU’s criminal law reform project, added: “While today’s verdict is a step forward in the fight for police accountability and may help heal a grieving community, the systems that allowed a police officer to murder Mr. Floyd, ripping him away from his family and the communities that loved him so much, remain fully intact.”

Margaret Huang, president and CEO of the Southern Poverty Law Center, urged Americans not to allow the outcome of the Chauvin trial let them forget about the deaths of Breonna Taylor, Ahmaud Arbery, Tony McDade, Dion Johnson and so many others.

“This case galvanized a movement for justice that has expanded across the country, rooted in longstanding demands for a reimagining of a criminal legal system built on anti-Black racism and white supremacy,” she said. “Lawmakers at the state and federal level must begin holding officers accountable for police violence. The time to act is now.”

DeRay Mckesson, Sam Sinyangwe and Johnetta Elzie, co-founders of Campaign Zero, wrote in a joint statement that the verdict “doesn’t change the demand for transformational change to end the epidemic of police violence we face in this country.”

The verdict is likely to provide some solace to protesters across the country who have responded with outrage this month to the police killings of two other Americans of color: 13-year-old Adam Toledo in Chicago and 20-year-old Daunte Wright in Brooklyn Center, Minn.

Wright’s killing, in particular, has shaken the Minneapolis area. He was shot to death during a traffic stop only 10 miles from where Chauvin stood trial, and Floyd’s former girlfriend knew Wright from her work at a local high school.

Any potential unrest provoked by the Chauvin verdict would bring full-circle the countless demonstrations that began with Floyd’s death in police custody last May.

Those resulting protests transformed the politics of a presidential election year already upended by the coronavirus pandemic, touching all corners of the United States — including Lafayette Square in Washington, D.C., where then-President Donald Trump ordered the violent dispersal of an apparently peaceful crowd so he could pose with a Bible in front of a nearby church.

In the months before Election Day, the Trump White House and its allies sought to tie all the protests to episodes of rioting and looting that took place in some cities. Trump repeatedly warned that the country would descend into all-out anarchy if Biden were elected, and reinforced his own “law and order” message by deploying militarized federal forces to Portland, Ore.

In recent days, a handful of governors had activated National Guard troops in anticipation of the Chauvin verdict, and White House press secretary Jen Psaki confirmed on Monday that the Biden administration was in communication with state and local officials ahead of the announcement. She would not elaborate further on coordination between the federal government and law enforcement authorities.

“There’s a range of conversations about how to ensure that, no matter what the outcome, there is a space for peaceful protest,” she said. “But, of course, we’ll let the jury deliberate, and we’ll wait for the verdict to come out before we say more about our engagements.”

In the final hours of Chauvin’s trial on Monday, the state’s attorneys emphasized Floyd’s humanity, Chauvin’s use of force, medical experts’ testimony and the nine minutes and 29 seconds of cellphone footage that sparked a mass movement against racism and police brutality last summer.

“This case is exactly what you thought when you saw it first, when you saw that video,” prosecuting attorney Steve Schleicher told jurors. “It is exactly that. You can believe your eyes.”

“It’s exactly what you knew. It’s what you felt in your gut. It’s what you now know in your heart,” Schleicher said. “This wasn’t policing. This was murder. The defendant is guilty of all three counts. All of them. And there’s no excuse.”

In his own closing argument, defense attorney Eric Nelson stressed the prosecution’s burden of proof, sought to highlight the perspective of a responding police officer, and insisted the case could not simply be narrowed down to the now ubiquitous video of Chauvin’s knee on Floyd’s neck.

“You have to take into account that officers are human beings capable of making mistakes in highly stressful situations,” Nelson said. “In this case, the totality of the circumstances that were known to a reasonable police officer in the precise moment the force was used demonstrates that this was an authorized use of force, as unattractive as it may be. And this is reasonable doubt.”

Nelson later asked Judge Cahill for a mistrial in light of comments made over the weekend by Rep. Maxine Waters (D-Calif.), who urged protesters to “get more confrontational” should Chauvin be found not guilty. Cahill rejected the defense’s request but noted that Waters “may have given you something on appeal that may result in his whole trial being overturned.”