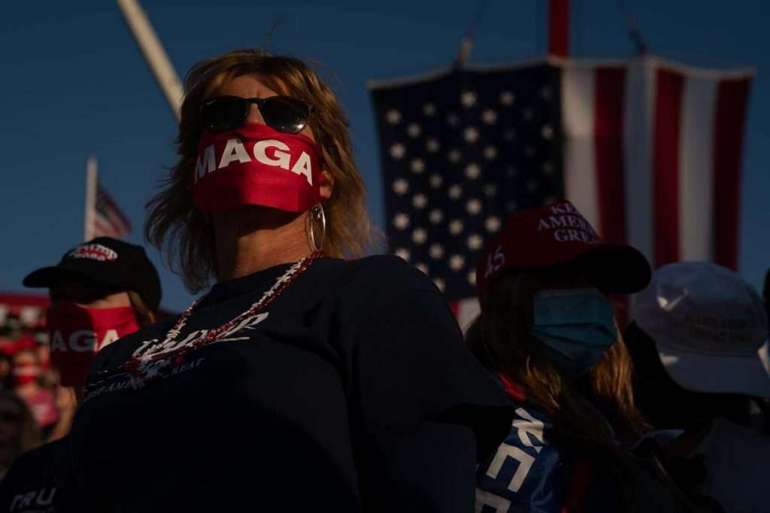 In Cobb County, the archetype of the GOP’s suburban erosion, Republican activists over the weekend were still relitigating former President Donald Trump’s baseless claims of widespread voter fraud while drafting resolutions to rebuke the state’s Republican governor, Brian Kemp, and other Republican officials for their unwillingness to overturn Trump’s loss. The Republican secretary of state, Brad Raffensperger, has been all but excommunicated.

The once dominant Georgia GOP might be in meltdown in the suburbs, but the rank and file remains obsessed with Trump and the perceived wrongs of the last election.

As party activists vented at their county convention, the chair of the Cobb County Young Republicans, DeAnna Harris, stewed in the parking lot of her local party office.

“Huge mistake,” she said of the hostilities directed at Kemp and the reliving of 2020. “We’ve got to get out of this mindset. It’s almost like insanity.”

To traditionalist Republicans in Georgia, the infighting between fervent Trump supporters and the establishment wing of the party has become increasingly alarming as the midterm elections come into focus. The GOP is desperate to regain its footing in the suburbs after Trump’s collapse there. But it was moderate Republicans and independent voters, not Trump loyalists, who abandoned Trump in November, and the party’s fixation on the former president may only alienate them further, with potentially disastrous consequences for 2022 and beyond.

Party officials remain optimistic that since the midterms historically favor the out-of-power party, state Republicans “should be poised to have a very good year,” said Randy Evans, a Georgia lawyer who served as Trump’s ambassador to Luxembourg.

Yet there are plenty of reasons to question whether historic trends will swing in their direction.

“I’m convinced that if infighting escalates, we could easily blow it, as well,” Evans said. “We’ve got to figure out how to come together, really. And it’s an easy thing to say but a very difficult thing to actually do in this environment… The consultants and the insiders will undoubtedly attempt to shift the focus toward a message that we can all agree, like we’re not Biden-Harris, and so let’s just focus on that. But I think some of these divisions are so deep that I don’t know that that’s enough.”

Making gains in the midterms is hard, he said, “if you’re shooting at each other inside the tent.”

Even before Trump lost the nation’s suburbs to Joe Biden, Republicans were facing a crisis in suburbia, the result of shifting demographics and voting habits around America’s largest cities. In Atlanta’s diversifying suburbs, what had once been a gradual “metamorphosis” was “put on steroids by Donald Trump,” said John Watson, a former Georgia Republican Party chair.

Mitt Romney had carried Cobb County by nearly 13 percentage points in 2012. Four years later, Trump lost the county to Hillary Clinton by about 2 points, and four years after that, he was clobbered by more than 14 percentage points. Over the span of eight years, it marked a 27-point swing against the Republican nominee.

The predicament for Republicans is that while many suburban voters, especially women, recoiled from Trump, he dramatically expanded the party elsewhere, pulling more working-class whites into the GOP and making inroads with Latinos. Now, for Republican Party organizers, the question hanging over the midterm elections is how to hold on to Trump’s base while recovering the moderate voters he lost to now-President Biden in November.

In Cobb County, the party’s election of a new county chair on Saturday offered a glimpse of the difficult path forward. A three-way race for an open seat, the contest featured one woman, of Puerto Rican descent, who invoked the “image problem” confronting the overwhelmingly white convention attendees in a county where people of color now make up nearly half of the population. Another candidate presented herself as an analytics expert. The third, Salleigh Grubbs, ran on a “Cobb First,” “America First” platform.

One supporter referred to Grubbs, a businesswoman, as “the female version of Donald Trump.”

The result wasn’t even close — Grubbs won in a landslide.

For nearly two decades, U.S. presidents have followed the advice of top military leaders and kept troops in Afghanistan. But last week President Biden ovverode the brass and announced a complete withdrawal.

Shaking his head at the back of the room when the outcome became apparent, Shelley Wynter, a conservative talk show host in Atlanta, said, “It’s going to hurt the party. We don’t need a bomb thrower. We need diplomats and ambassadors.”

He said, “It’s hard to go into east Cobb County and talk to suburban voters with a MAGA hat on.”

In Georgia and elsewhere, there have been some positive signs for the GOP in the suburbs. Despite Trump’s loss, Republicans performed well down-ballot in November, both nationally and in Georgia. Scores of traditionally Republican voters split their tickets, elevating Biden while propelling Republicans to victories in congressional and state legislative races.

“It’s a mistake to assume that suburban voters are somehow locked into the Democratic column,” said Whit Ayres, the longtime Republican pollster. “They are very much up for grabs not just in Georgia, but around the country.”

Still, Ayres said, the focus of party activists on exacting a measure of payback on the party’s own statewide elected officials is “doing the exact opposite of what’s necessary to revive the Republican Party in the suburbs.”

“Picking a fight with your own party’s governor and lieutenant governor and secretary of state,” he said, “doesn’t strike me as the wisest of political moves.”

Following the weekend conventions, the Atlanta Journal-Constitution reported that most local Republican parties declined to rebuke Kemp, with expressions of anger largely coming from rural, heavily conservative swaths of the state. In Gwinnett County — another populous, once-Republican Atlanta suburb — resolutions to censure Kemp and Lt. Gov. Geoff Duncan and to encourage Raffensperger to resign were rejected. But in Cobb County, resolutions rebuking Kemp and other officials were merely put off because of a time limitation, officials said. They are expected to be taken up by county party officials at a later meeting.

“The anger with respect to the fraudulent vote is extreme, and I think many voters do not think our elected officials did the job,” said Leroy Emkin, a member of the Cobb County Republican Party’s resolutions committee.

The party, he said, has an obligation to put its politicians “on notice” regardless of the political ramifications.

“It is a matter of truth, of the Constitution,” he said.

Emkin is not in the minority. Most Republicans here believe that the last election was not free and fair. And it’s in part due to frustration over the outcome of that election, coupled with the reality of a Democratic-controlled Washington, that Georgia Republicans credited large crowds at their events this past weekend. The gathering in Cobb County, which drew several hundred delegates, was more than double the size of some previous years, said Jason Shepherd, the party chair before Grubbs was elected.

It was the same at county party meetings across the state. Jason Thompson, a Republican national committeeman from Georgia, said the GOP “is energized more than ever.”

“Not everyone agrees on everything,” he said. “But I can assure you that what we do agree upon is that what President Biden is pushing and the Democrats in Congress … is just beyond the pale.”

Republicans now have a common foil in Washington. And in Georgia, Republicans have rallied recently around the state’s controversial new voting law — and against the opposition to it from Democrats and corporate America. Among the resolutions Cobb County Republicans are likely to pass is one targeting Coca-Cola and Delta, two locally headquartered companies that condemned the law.

Watson said that “there has been no greater coalescing moment among Republicans than the fight that has transpired since SB 202,” the Georgia voting law.

“It has absolutely been a galvanizing force that has bonded anew the governor’s relationship with the most hard-core Republicans,” he said. “Is it ubiquitous and unanimous? No. But that’s impossible.”

By the time the midterm elections arrive, Republicans will almost certainly have other grievances to bond over, as well as policies of Biden and the Democratic-controlled Congress that they view as far out of step with mainstream voters. And the GOP’s own divisions are likely to fade to at least some degree once the primaries are done and before the general election.

“The Republicans don’t have to defend their agenda in 2022 because the Democrats are in control of everything,” said Jay Williams, a Georgia-based Republican strategist. “Republicans just need to play defense and let Democrats eat themselves, and that’s what they’re doing.”

But the GOP in Georgia is not yet done cannibalizing itself. Outside the party convention in Cobb County, David Gault, a local precinct chair, said that “people just need to really calm down and, I think, perhaps we just need to mind our own store right now.” The party, he said, should be “all about the future.”

The response from the base came from inside the convention hall, where a delegate carried a poster outlining complaints about voter fraud, Kemp and Raffensperger, among others.