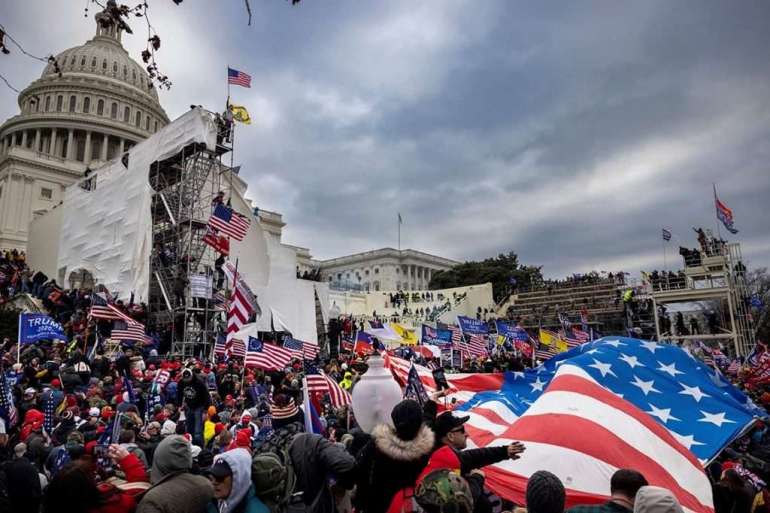 “Solitary confinement is a form of punishment that is cruel and psychologically damaging,” Warren said in an interview. “And we’re talking about people who haven’t been convicted of anything yet.”

The Massachusetts Democrat, a member of Senate Majority Leader Chuck Schumer’s leadership team, said that while some limited uses of solitary confinement are justified, she’s worried that law enforcement officials are deploying it to “punish” the Jan. 6 defendants or to “break them so that they will cooperate.”

Her sentiments are shared by Durbin, who also chairs the Senate Judiciary Committee and expressed surprise that all of the detained Jan. 6 defendants were being kept in so-called “restrictive housing.” While their defense of accused rioters’ rights as criminal defendants is unlikely to change the Justice Department’s handling of those cases, it’s a notable case of prominent progressives using their political clout to amplify their criminal justice reform calls even on behalf of Donald Trump supporters who besieged the entire legislative branch in January.

Durbin, who has long sought to eradicate solitary confinement, told POLITICO that such conditions should be a “rare exception,” for accused insurrectionists or any other prisoners.

“There has to be a clear justification for that, in very limited circumstances,” he said.

D.C. government officials say the pandemic already has sharply limited freedom of movement in the jail where most Jan. 6 defendants are held. In fact, the entire jail has been subject to strict lockdown procedures since the onset of the pandemic, a determination that has caused broader controversy about prisoners’ rights. But restrictive housing is a maximum-security designation, and the blanket designation for the Capitol defendants — which isn’t expected to ease even if pandemic era restrictions do — is a notable decision for a large group of inmates who have yet to be tried for their alleged crimes.

Asked about the Democratic senators’ concerns, a spokesperson for the D.C. Department of Corrections touted the growing number of educational programs and limited amenity access that inmates are now offered.

“We appreciate the concern, patience and support of our neighbors as we work to keep all within DOC safe, as well as support the public safety of all in the District,” said spokesperson Keena Blackmon.

Warren and Durbin’s interest in the conditions facing detained Jan. 6 defendants come amid a massive Justice Department push to arrest and prosecute the hundreds of people who breached the Capitol and threatened the peaceful transfer of power to the Biden administration.

Dozens of men locked up in D.C.’s jail were deemed by prosecutors and judges as the most egregious participants in the Jan. 6 violence, a status that hardly appears to afford them sympathy. Still, as their numbers have grown, those defendants’ plight has drawn attention from federal judges and defense lawyers.

Warren and Durbin, of course, were also targets of the very rioters whom they’re now speaking up for. In fact, one detained defendant — Ronald Sandlin — is charged with being among the first to attempt to breach the Senate chamber, tangling with Capitol Police officers outside the gallery doors just as senators escaped to safety.

Sandlin recently read a statement in court describing the conditions he’s being held in as “mental torture.”

When another defendant, Lisa Eisenhart, challenged these conditions as unconstitutional last month and demanded a transfer to another jail, the D.C. government defended its decision in court.

“A policy that is reasonably related to a legitimate government objective in running a correctional facility does not amount to punishment, even when the policy is applied to a pretrial inmate,” Stephanie Litos, an attorney for the city, said in a recent filing that acknowledged the city’s policy applied to all Jan. 6 pretrial detainees.

After the city’s legal filing, Judge Royce Lamberth rejected Eisenhart’s challenge. (She was later released after an appeals court ruling undercut the government’s case for her detention.) But the longer that the Capitol defendants languish — prosecutors say it could be months before they fully scour the evidence they’ve obtained from the insurrection — the more loudly they are sounding the alarm about the toll their isolation has taken.

“This is not normal. It’s not normal to isolate people and make them eat on their floor,” said Marty Tankleff, a defense attorney representing two detained defendants, Edward Lang and Dominic Pezzola.

Tankleff, who himself was imprisoned for nearly two decades on a murder conviction before his 2008 exoneration, urged other lawmakers who see the Jan. 6 defendants’ conditions as unjust to contact him.

Attorneys for a slew of other accused rioters, meanwhile, say their clients’ conditions have made it nearly impossible to conduct genuine attorney-client meetings. Two defendants have contracted Covid in the D.C. jail, and one, Ryan Samsel, claims he was beaten by a prison guard and left with permanent eye damage. That incident is under investigation, according to judges and federal authorities.

At a hearing last month, detained riot defendant Richard Barnett — charged in part for breaking into Speaker Nancy Pelosi’s office and posing for a now-infamous picture with his feet on her office desk — lamented the conditions he is facing while awaiting trial.

“I’ve been here a long time. … It’s not fair,” Barnett said. “You’re letting everyone else out. I need help.”

Others have lodged complaints about access to needed medication or health monitoring, prompting intervention from judges. One, Jacob Chansley, won a transfer to a prison in Alexandria, Va., after the D.C. jail said it was too onerous to provide him organic food that he argued was necessary to comport with his spiritual practice.

Some Jan. 6 defendants have contended that there is a racial component to their treatment: Most are white — some affiliated with white nationalist groups — while most D.C. inmates and prison guards are Black.

Judge Paul Friedman said last week that those concerns are “not necessarily illegitimate.”

“It may be that some of the people arrested on Jan. 6 are white supremacists” or that they’re perceived to be, he added.

Insurrection detainees are not completely isolated from the outside world. While in their cells, they have access to tablet computers they can use to trade messages with friends and family members. They can also see other accused rioters during the one hour a day that they are given outside their cell, although it is also their only opportunity for a shower, exercise and contact with their attorneys.

But as the defendants’ complaints grew, so did the involvement of federal district court judges in Washington. Judge Emmet Sullivan indicated last week that he planned to meet with D.C. Department of Corrections officials to discuss the Jan. 6 detainees’ conditions.

Though he didn’t divulge the results of that meeting at a hearing this week, Sullivan notably encouraged one defendant’s attorney to seek his confinement in Georgia, where he was arrested. In that state, Sullivan noted, the accused wouldn’t necessarily be placed in solitary confinement by default.