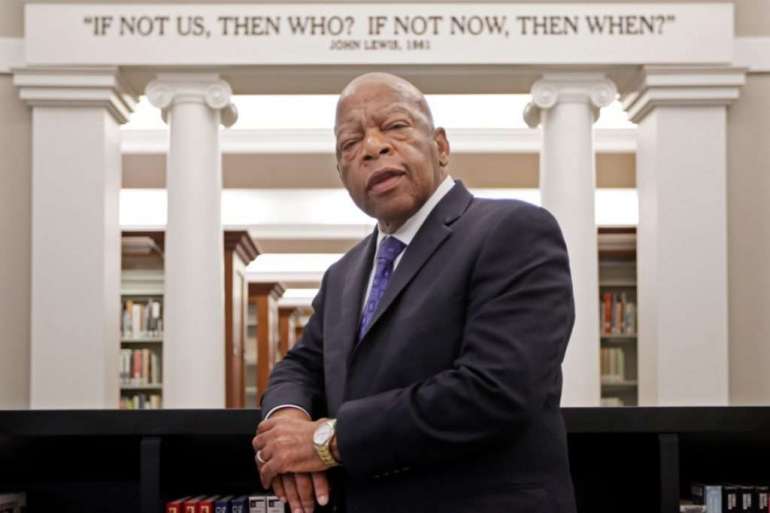 Still, multiple Democrats acknowledged this week that the voting rights-only bill named for Lewis stands a better chance to make it to President Joe Biden’s desk. That bill has more Democratic support and an outside chance to win over a few Republicans, based on past votes to reauthorize the Voting Rights Act.

And the stakes couldn’t be higher for Biden’s party as they search for a way to blunt the GOP-led voter crackdown efforts in state legislatures ahead of next November’s midterms.

“I certainly think our focus ought to be on [the Lewis bill] and voting rights,” said Rep. Anthony Brown (D-Md.), a member of the CBC. “You would think that that would provide a real good opportunity for a handful of Democratic senators who want to hold onto the filibuster [to say] ‘Yes, we can do it on this John Lewis Voting Rights [Act].’”

One big question surrounding a potential shift in focus to the Lewis bill is the timing for its consideration. The House already has passed the larger-scale elections bill, and the Senate this week held a hearing on it, but senior Democrats are still working on revisions to the voting rights-only bill named for the late Georgia civil rights icon.

Those changes to the Lewis measure could push a vote back to late summer or early fall at the earliest, according to multiple lawmakers and aides. Some in the caucus are discussing a possible vote next year.

But CBC members say they want to move quickly. Their sense of urgency is in part because states will start receiving redistricting data over the summer from the Census Bureau to use for drafting new maps for House districts. If Democrats’ Lewis bill — which would restore key sections of the 1965 Voting Rights Act — is not passed by then, certain states will not have to get preapproval for their electoral maps affirming an absence of racial discrimination.

Those protections were eliminated after the Supreme Court struck down the Voting Rights Act’s so-called pre-clearance formula in 2013. That decision allowed many states to change their election laws without prior federal approval, including several southern states that drew criticism from voting rights advocates. Some Black lawmakers said Congress needs to get voting rights legislation to Biden’s desk by September at the very latest, because most states will begin enacting new maps around then, while others are already beginning the process.

“If you want to play into [Republican] hands, you do nothing at all and let them pass redistricting maps that absolutely don’t have to be pre-cleared where they can do whatever the hell they please, and they can discriminate at will. Or, you step up your game and you do what needs to be done,” said Rep. Marc Veasey (D-Texas).

Veasey said that passing the broader Democratic election reform bill and the narrower restoration of civil rights-era law named for Lewis are “equally important,” but that only the latter bill has a real deadline. “If you don’t pass” the voting rights-only bill, he said, “you’re basically giving them a green light to just go ahead and discriminate against Black and Hispanic voters.”

The voting rights restoration measure passed the House on a mostly party-line vote last Congress, but is undergoing some additional vetting this year now that Democrats control both chambers.

The bill must be airtight, according to multiple lawmakers, because they want it to be able to survive expected legal challenges in states. Members of the CBC are now working with leaders of two panels that have jurisdiction over election issues — the House Administration Committee and House Judiciary Committee — to shore up the Lewis bill’s language.

“The [Supreme] Court is calling on us to update the formula and so that’s what we’re trying to do,” said Rep. G.K. Butterfield (D-N.C.), a CBC member who chairs the House Administration subcommittee overseeing federal elections. “You cannot just snap your fingers and update a formula. You’ve got to collect evidence” before a new version of the bill is released, he added.

Butterfield, a former CBC chair, said his subcommittee would aim to finish its work on developing a new pre-clearance formula by June 30. Lawmakers say they are taking time to build a strong case for an updated formula to ensure that any new law they can pass is not struck down again by the Supreme Court.

“I think we have more work that we needed to do in terms of responding to the Supreme Court’s order,” said Rep. Karen Bass (D-Calif.), also a former chair of the CBC, referring to the 2013 high court ruling that called on Congress to develop a new pre-clearance formula.

But with the recent increase in voter suppression efforts nationwide, Bass added, “I don’t know how much of a record you need.”

Shifting focus from the broader H.R 1, which has drawn grumbling from election administrators and experts about some of its mandates for the ballot box, would mark a significant strategic adjustment for Democrats. But some of them privately believe the voting rights-only bill will be an easier lift than H.R. 1, though they continue to support the ethos of the bigger bill.

And some in the House Democratic Caucus have already raised their own issues with HR1. That bill’s proposed redistricting commission sparked complaints from several CBC members who feared the proposed changes could be used by GOP-controlled legislatures to undermine Black voters’ ballot access, though most ultimately backed the bill on the floor.

Democratic aides close to talks on the legislation insist that any concerns can be addressed in hypothetical conference talks.

Activists have insisted that H.R. 1 and the John Lewis Voting Rights Act, which has progressed on a much slower timetable so far, are not a one-or-the-other proposition and must both be passed. Some members of the CBC have made a similar case.

CBC Chair Joyce Beatty (D-Ohio), for one, said she still wanted to get H.R. 1 signed into law, “and then we’ll get ready to start our hearings on” the Lewis bill. Bass said a push for the voting rights-only bill should come “in addition” to advancing the broader election legislation.

And first-term Rep. Mondaire Jones (D-N.Y.), another CBC member, said the larger election reform bill, is his top priority in Congress this year. “It is of foundational importance. It is democracy-saving legislation,” he said.

Their optimism doesn’t quite reach across the Capitol: H.R. 1 faces an uncertain future in the Senate.

While 49 of 50 Democratic senators have signed on, Sen. Joe Manchin (D-W.Va.) remains unconvinced. In late March, Manchin urged Democrats to step back from the bill and take an approach that would “transcend partisanship,” laying out a smaller-scale proposal that he said could get Republican senators’ support. The Senate Rules Committee is nonetheless set to mark up the broader bill on May 11.

With the GOP in control of the Senate at that time, the voting rights bill never came to the floor.

Zach Montellaro and Olivia Beavers contributed to this story.