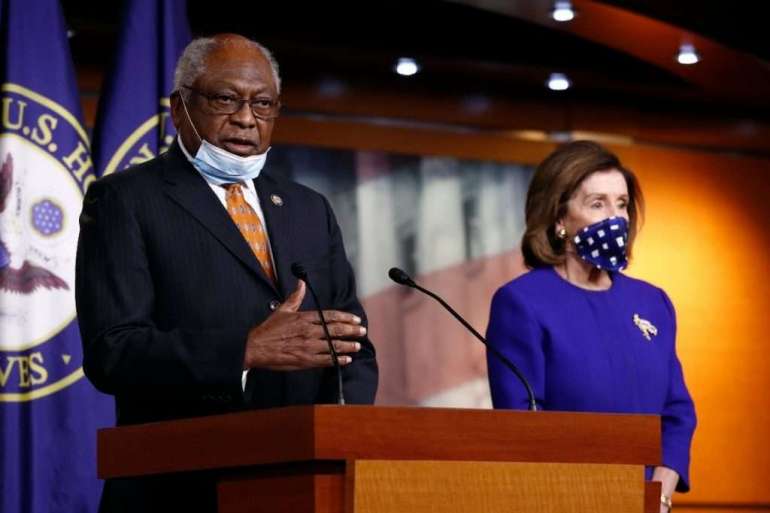 Floyd, of course, did not willingly sacrifice his life: Chauvin used his knee to pin down Floyd’s neck for more than nine minutes on the pavement of a south Minneapolis intersection, even after Floyd lost consciousness. Two autopsies, one conducted by the county medical examiner and the other by independent pathologists hired by Floyd’s family, both concluded the death was a homicide.

Pelosi sought to clean up her remarks in a tweet later Tuesday, writing that Floyd “should be alive today” and that he “did not die in vain.” On Thursday, Clyburn offered up a tweaked version of Pelosi’s original message, telling CNN that Floyd “did sacrifice his life. Maybe against his will, but he did.”

“I was standing next to her when she said it, and I realized what she meant,” Clyburn said. “My goodness. All of us sometimes put the infinitive in the wrong place. It was for having sacrificed your life, rather than sacrificing it. She just used the wrong infinitive, and I wish we all had time to consider our grammar books every time we got ready to speak.”

As for Waters, Clyburn maintained that the congresswoman was merely echoing the teachings of Dr. Martin Luther King Jr. when she told protesters in the Minneapolis area on Saturday to “get more active” and “get more confrontational” should Chauvin be found not guilty.

Judge Peter Cahill, who presided over Chauvin’s trial, warned on Monday that those remarks could be grounds for a mistrial if the criminal case were appealed, and House Republicans introduced a resolution to censure Waters that ultimately failed on Tuesday.

Clybrun said Waters was specifically making reference to King’s “edict on confrontations” and “Project C” campaign in Birmingham, Ala. — an initiative named for the segregated city’s “Confrontation with the fight for justice and morality in race relations,” according to King’s autobiography.

In the aftermath of Chauvin’s conviction on Tuesday and motivated by the recent killings of other Americans of color by law enforcement — including 13-year-old Adam Toledo in Chicago, 20-year-old Daunte Wright in Brooklyn Center, Minn., and 16-year-old Ma’Khia Bryant in Columbus, Ohio — Congress is now revisiting the prospect of police reform.

Democratic lawmakers are advocating the George Floyd Justice in Policing Act, which passed the House last month, while Rep. Karen Bass (R-Calif.) and Sens. Cory Booker (D-N.J.) and Tim Scott (R-S.C.) are also pursuing a bipartisan bill. But with a narrowly divided Senate and other priorities such as infrastructure, voting rights and gun reform clogging the legislative agenda, the odds of success remain uncertain.