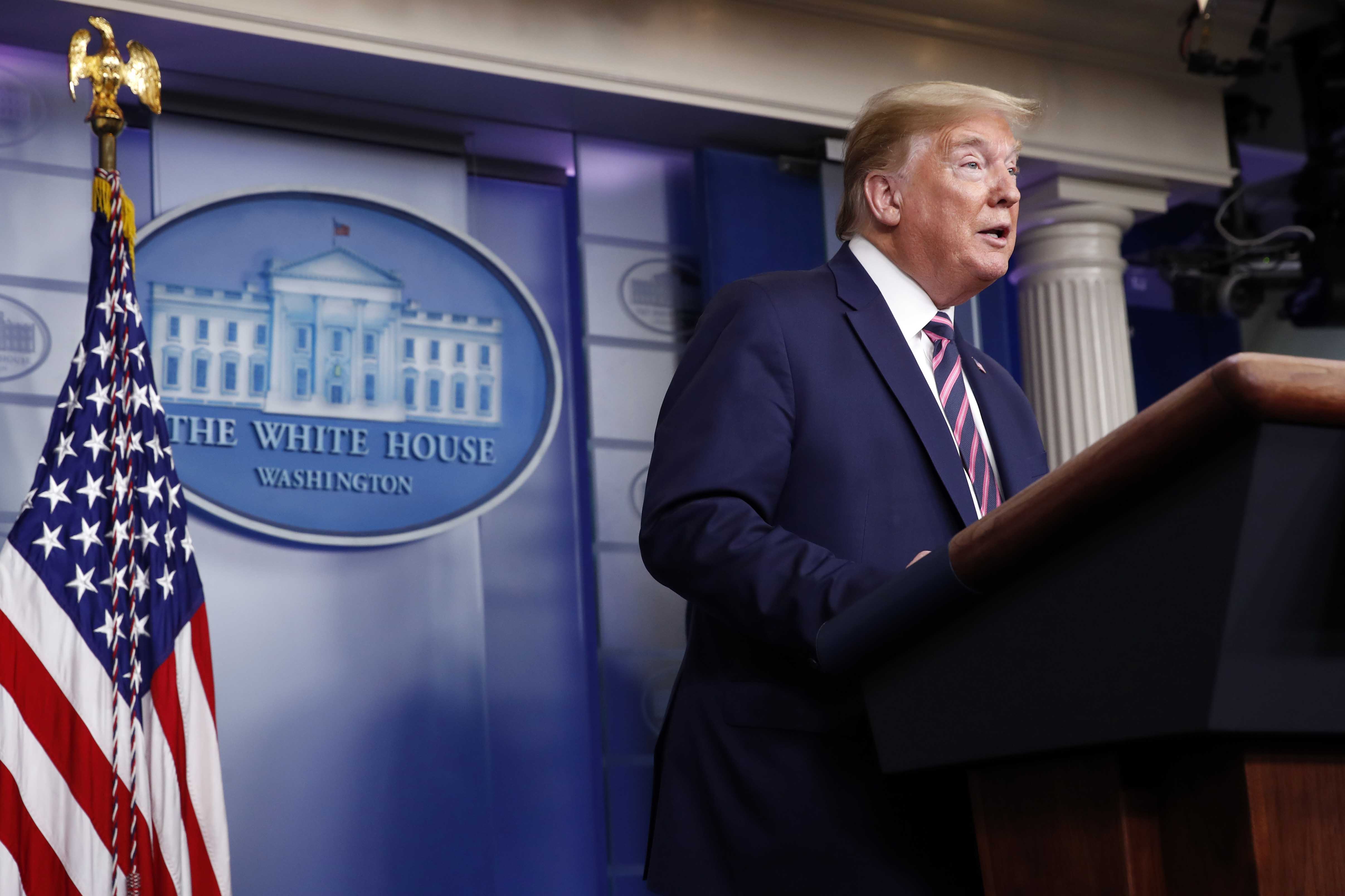 For weeks, Trump had been giving winding, stream-of-consciousness updates on the state of the Covid fight as it clearly worsened. So when he got up from the Oval Office to brief reporters gathered in the James S. Brady Press Briefing Room on April 23, there was no expectation that the day’s proceedings would be any different than usual.

Privately, however, some of his aides were worried. The Covid task force had met earlier that day — as usual, without Trump — to discuss the most recent findings, including the effects of light and humidity on how the virus spreads. Trump was briefed by a small group of aides. But it was clear to some aides that he hadn’t processed all the details before he left to speak to the press.

“A few of us actually tried to stop it in the West Wing hallway,” said one former senior Trump White House official. “I actually argued that President Trump wouldn’t have the time to absorb it and understand it. But I lost, and it went how it did.”

Trump started his press conference that day by doing something he’d come to loathe: pushing basic public safety measures. He called for the “voluntary use of face coverings” and said of his administration, “continued diligence is an essential part of our strategy.”

Quickly, however, came a hint at how loose the guardrails were that day. Trump introduced Bill Bryan, head of science and technology at the Department of Homeland Security. “He’s going to be talking about how the virus reacts in sunlight,” the president said. “Wait ‘til you hear the numbers.”

As Bryan spoke, charts were displayed behind him about surface temperatures and virus half-lives. He preached, rather presciently, for people to “move activities outside” and then detailed ongoing studies involving disinfectants. “We tested bleach,” he said at one point. “I can tell you that bleach will kill the virus in five minutes.”

Standing off to the side, Trump clasped his hands in front of his stomach, nodded and looked out into the room of gathered reporters. When Bryan was done, he strode slowly back to the lectern.

“A question that probably some of you are thinking of if you’re totally into that world,” Trump began, clearly thinking the question himself, “So, supposing we hit the body with a tremendous — whether it’s ultraviolet or just very powerful light — and I think you said that that hasn’t been checked, but you’re going to test it. And then I said, supposing you brought the light inside the body, which you can do either through the skin or in some other way, and I think you said you’re going to test that, too. It sounds interesting. And then I see the disinfectant, where it knocks it out in a minute. One minute. And is there a way we can do something like that, by injection inside or almost a cleaning. Because you see it gets in the lungs, and it does a tremendous number on the lungs. So it would be interesting to check that.”

Dr. Deborah Birx, Trump’s former coronavirus response coordinator, sat silently off to the side as the president made these suggestions to her. Later, she would tell ABC, “I didn’t know how to handle that episode,” adding, “I still think about it every day.”

Inside the Biden campaign, aides were shocked as well. They were working remotely at that juncture, communicating largely over Signal. But the import of what had happened became quickly evident to them.

“Even for him,” said one former Biden campaign aide, “this was stratospherically insane and dangerous. It cemented the case we had been making about his derelict covid response.”

In short order, the infamous bleach press conference became a literal rallying cry for Trump’s opponents, with Biden supporters dotting their yards with “He Won’t Put Bleach In You” signs. For Trump, it was a scourge. He would go on to insist that he was merely being sarcastic — a claim at odds with the excited curiosity he had posing those questions to Birx. His former team concedes that real damage was done.

“People joked about it inside the White House like, ‘Are you drinking bleach and injecting sunlight?’ People were mocking it and saying, ‘Oh let me go stand out in the sun, and I’ll be safe from Covid,” said one former administration official. “It honestly hurt. It was a credibility issue. … It was hurting us even from an international standpoint, the credibility at the White House.”

That Trump was even at the lectern that day was head-scratching for many. For weeks, he and his team had downplayed the severity of the Covid crisis even as the president privately acknowledged to the Washington Post’s Bob Woodward that it had the potential to be catastrophic. But as it became clearer that the public was not buying the rosy assessments, Trump had decided to take his fate into his own hands — assembling the press on a daily basis to spin his way through the crisis.

He loved it. The former administration official said Trump was elated with the free airtime he was getting on television day after day. “He was asking how much money that was worth,” the aide recalled. The coverage was so ubiquitous that, at one point, Fox News’ Bret Baier attended the briefing and peppered the president with questions because his own show was being routinely interrupted.

The bleach episode changed all that.

Aides immediately understood what a public health quagmire Trump’s remarks had created. White House press secretary Kayleigh McEnany insisted he was being taken out of context.

“President Trump has repeatedly said that Americans should consult with medical doctors regarding coronavirus treatment, a point that he emphasized again during yesterday’s briefing,” McEnany said in a statement issued the next day. “Leave it to the media to irresponsibly take President Trump out of context and run with negative headlines.”

But behind the scenes, Trump’s remarks were used as evidence by senior aides for why they needed to crack down on unvetted information being put in front of the president. “Either they didn’t know what he was going to say — which isn’t ideal — or they didn’t push back before he went out to the briefing,” said a former senior communications official in the Trump administration. “It was a huge unforced error that could have been prevented.”

By then, White House aides were already debating the efficacy of having Trump relay health information to the public and having to answer whatever question a reporter might throw his way. Some aides — along with Republican allies on Capitol Hill — were pushing to get the president to take a back seat to his health experts at the podium.

“It became like a presser for the sake of having a presser. We didn’t have anything to announce or real policy plans,” a former White House official said. “If you’re just coming out and talking, a Q&A [with reporters] wasn’t going to be helpful.”

Trump would end up doing only a handful more press conferences after the bleach episode before picking them back up again in July. A year later, the episode is still considered a defining point in the Covid fight and a prime exhibit of what can go wrong when an over-confident president believes he can message his way through a once-in-a-lifetime global pandemic.

“Undoubtedly [it was] a seminal moment in presidential communications, and while it is easy to laugh it off, I hope it educates leaders and communicators for decades,” said former Obama White House press secretary Robert Gibbs. “But this was the moment where we knew without any doubt that the government was in way over its head, and its ability to both respond effectively and educate Americans about what to do was not going to be anywhere close to meeting the moment.”