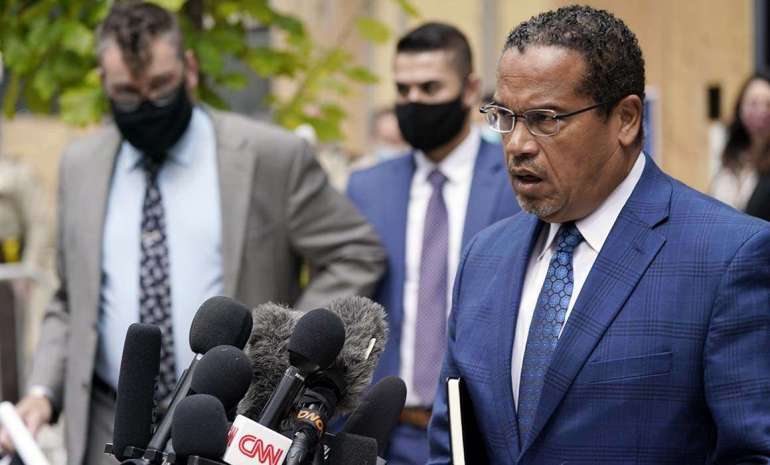 Ellison, a prominent ally of Bernie Sanders during both of the Vermont senator’s presidential bids, has received accolades from both flanks of the Democratic Party for his role in Chauvin’s trial. Neera Tanden, president of the Center for American Progress and a longtime critic of Sanders, tweeted that she is “so grateful” that Ellison was in charge of the case. Progressives such as Justice Democrats spokesperson Waleed Shahid praised “his leadership.” Rev. Jesse Jackson, the civil rights leader, also singled out Ellison for his role.

“He is a living example of how the state’s top law enforcement should not only react to a crime, but also assemble the evidence and facts,” said Donna Brazile, the former chair of the DNC. “He has been phenomenal. There’s no other way to describe it. He filled a void. He provided steady leadership.”

Minnesota Gov. Tim Walz announced last May that Ellison would be at the helm of prosecuting Chauvin — a decision that came in the wake of Floyd’s family members, activists and lawmakers voicing concerns about the local prosecutor who had been leading the case until then.

Hennepin County Attorney Mike Freeman had been managing it and would have been in charge of the prosecution, but that changed after 10 state representatives sent a letter to Walz saying they — and particularly their Black constituents — no longer trusted Freeman’s ability to “impartially investigate and prosecute” the case.

Ellison, on the other hand, was a more natural fit. A former state legislator, he was Minnesota’s first Black member of Congress and the first-ever Muslim elected to Congress, where he represented a Minneapolis-based district for over a decade. Early in his career, he worked for 16 years in civil rights law — five of them as the head of the Legal Rights Center, a Minnesota firm that promotes racial and social justice. As a law school student, he led a protest against police brutality and the failure to charge transgressing officers in Minneapolis. He also has been singled out by cops in his own life, he said, because he is Black.

“He was the right person for this moment. Him and his team, they changed the course of history,” said Nina Turner, Sanders’ former campaign co-chair who worked with Ellison during the senator’s presidential bids. “He’s very down-to-earth, very committed, very focused but also warm. … With all of his intellect and skills that he has, he is a Black man in America and he understood from lived experiences the historic import, too.”

In an interview, Jackson called Ellison “tough” and said “he has the capacity to relate to all people, and give them a comfort level.”

Yet Ellison’s record has also attracted criticism. Minneapolis Police Lt. Bob Kroll, president of the local Police Officers Federation, said in 2018 when Ellison was running for attorney general that “Keith Ellison has a long history, and it’s a negative history, with the Minneapolis Police Department … I don’t wholeheartedly believe that [he respects law enforcement]. I think he’s got a different agenda that, quite frankly, is anti-law enforcement.”

The same year, Ellison’s ex-girlfriend posted allegations of domestic abuse on social media. He denied the allegations, which came near the height of the #MeToo movement and nearly derailed his campaign. Ellison defeated his GOP opponent, Doug Wardlow, by 4 percentage points in 2018, the smallest margin of any statewide Democrat on the ballot that year.

Ellison’s reputation as an unabashed progressive was highlighted when he ran for DNC chair in 2017 — he was endorsed by Sanders and Elizabeth Warren. He ultimately lost the race, a blow to the liberal wing of the Democratic Party as a whole.

Despite Ellison’s 2018 victory and current momentum, his future political options are somewhat limited. Walz, a Democrat, is in his first term after winning by 11 points in 2018 and has broken fundraising records in advance of the 2022 gubernatorial election. And given the hits the governor has taken from progressives over his handling of criminal justice, Ellison actually did Walz a favor by securing the conviction of Chauvin.

A spokesperson for Ellison declined to comment for this story.

“He can become a transformative figure, and I think he has the capacity for many great things,” said James Zogby, a DNC member who served with Ellison on the national party’s platform drafting committee in 2016, “He’d be a great senator, a great governor — whatever Keith Ellison feels he’s ready to do, he’ll be good at it.”

Even if opportunities to advance his career are limited in the near-term, the rise of Black Lives Matter and the widespread belief that the country’s criminal justice system is flawed has elevated the role of attorneys general and district attorneys, giving Ellison a national platform going forward.

“The best use of [Ellison’s] talent is right where he is right now,” said Turner, though she added “that doesn’t mean he won’t go other places.”

Next year, Ellison is up for reelection as attorney general. Wardlow, a former state representative who’s been working as general counsel for MyPillow, the bedding company owned by Donald Trump ally Mike Lindell, announced in February he is running again.

On Tuesday, Ellison said he would not call the verdict in Chauvin’s case “justice.”

“Because justice implies true restoration,” he said. “But it is accountability, which is the first step towards justice. And now the cause of justice is in your hands. And when I say your hands, I mean the hands of the people of the United States.”